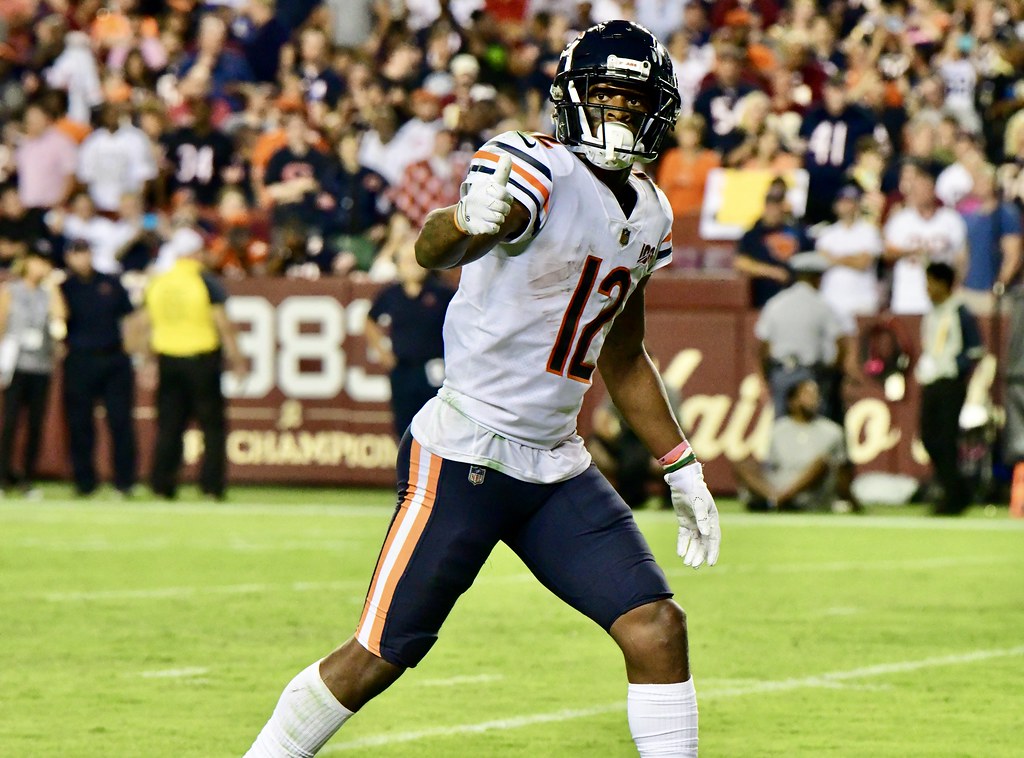 "Allen Robinson" by All-Pro Reels is licensed under CC BY-SA 2.0

Who Will Matt Nagy Target?

Last week I wrote on Pro Football Mania that the Chicago Bears needed to address the quarterback position. I briefly mentioned then that the Bears had many other holes to fill, especially regarding the offense. Today, I will go over who are some free-agent offensive skill positions the Bears should target, as well as how they should approach the NFL draft.

In last week’s piece, I suggested Chicago should address their quarterback concerns both on the free-agent market with a savvy veteran and with this year’s NFL draft. Keeping that plan in mind, I want to look at what options the Bears have at filling positions where they lost players to free agency. The method I suggested was to sign Ryan Fitzpatrick and draft Kellen Mond in the third or fourth rounds. Thereby saving their first and second-round picks for valuable draft assets that the Bears need.

Allen Robinson May or May Not Be Back

Keeping that in mind, two draft picks are not going to save this Bears offense. Currently, their best offensive player, Allen Robinson, is an unrestricted free agent. The Bears could and probably should franchise tag Robinson. Right now, though, the relationship between the Bears and Robinson is a tumultuous one. Chicago can’t afford to let Robinson walk free and clear from the team. They have no way of replacing him. Simultaneously, both the Bears and Robinson can’t get on the same page regarding a long-term contract.

In addition to Robinson’s challenges, currently, the Bears are projected to be around two million dollars over the projected salary cap, without Allen Robinson on the roser. Cordarrelle Patterson is also an unrestricted free agent, and the rumor is Jimmy Graham will be on the chopping block due to the salary cap concerns.

These skill position players are currently on the Chicago roster and under contract: Nick Foles, Darnell Mooney, Cole Kmet, Anthony Miller, David Montgomery, and Tarik Cohen. This group is a solid base to build around, minus Nick Foles. Montgomery looked the part of a bell-cow back down the stretch, and he is on a cheap rookie deal. Anthony Miller has been a letdown, in my opinion, but Mooney, on the other hand, has flashed. While Mooney has looked good. In his rookie campagin Mooney saw 98 targets, not bad, but he is not a guy you use as your number one receiver.

The biggest questions for me and the Bears are, what will the final salary cap number be, and can the Bears tag Allen Robinson and still get under the cap? While I want to say, the Bears HAVE to sign Robinson with the franchise tag, and I am just not convinced they can make it work. Chicago has put themselves in a bind with the trade they made to move up to get Mitch Trubisky.

If Chicago can find a way to get under the cap and franchise tag Allen Robinson, it would allow the Bears to bolster the offensive line, take a shot with someone like Kellen Mond, and add needed receiver depth. To try this approach, Chicago would have to cut Jimmy Graham, which looks likely, as I already mentioned. Frankly, for what Jimmy Graham brings to the table, there is no reason to feel like Cole Kmet can’t fill that role amicably. As a roookie tight end Kmet started nine games and saw 44 targets, with Graham in the lineup.

Regarding the tight end position, Kmet’s skill set is getting downfield and being a receiving target. Don’t get me wrong, Kmet has made considerable strides in the NFL as a blocker, but if you want to showcase his skills, you need to get him involved in the passing game, which is the role Graham mostly held last year. In my opinion, waiving Jimmy Graham only bolsters Kmet’s fantasy value and truly allows Kmet more time on the field. There’s no reason to overthink this.

Another player that played some significant snaps for the Chicago Bears that is no longer under contract is Cordarrelle Patterson. Patterson has been more of a gadget player than a dedicated wide receiver or running back. Due to Cohen’s injury this year and when Montgomery got banged up, Patterson played running back. In weeks 10 and 12, Patterson got double-digit carries at runningback while never seeing more than four passing targets in any game this season.

In my opinion, the most significant loss with Patterson not being on the roster is in the return game. Patterson is so good at returning kicks he can change a game. The lack of Patterson in the kicking game is the loss that will hurt the Bears most, considering it was defense and special teams that kept Chicago in games. Over his career Patterson has eight return touchdowns and has averaged almost 30 yards per return. To give you a frame of refference, Patterson is second all time in average return yards and tied for first in touchdowns.

Finding a returner as skilled as Patterson in the draft is not easy, but considering the Bears need to draft some receiver talent, finding a player that can also return kicks should be a focal point for Chicago. The Bears can use the draft to try to minimize the loss of Patterson. After all, Patterson was drafted in the first round by the Minnesota Vikings has mainly been just a return specialist for years. Finding a replacement the does exactly what Patterson does, probably isn’t going to happen, but finding a reciever that can also return kicks is plausible.

The thing you do have to wonder, though, how shallow is the depth at running back for the Chicago Bears? The Bears felt the need to move a player, historically designated as a wide receiver, to play running back instead of pulling a running back off the bench. I understand Tarik Cohen was out of the lineup with an injury, but I can’t help but question and wonder, what are the Bears doing at running back?

Cohen and Montgomery are very different players and bring two different skill sets to the table. The problem I see, Cohen is never going to be a between the tackle running back, like Montgomery is. Cohen thrives with the ball in his hands in the open field, while Montgomery is a guy you count on to pound the rock.

Do I think Montgomery is uber-talented for a running back? Not really, but frankly, we have seen plenty of successful NFL offenses and running backs that don’t scream, “I am a super talented running back.” Some people even think the system is more important than who the actual running back is. That’s a topic I would like to discuss but for a different day.

The point being, the Bears have both Cohen and Montgomery under contract for this year. There is no reason to reinvent the wheel at the running back position. Montgomery has a cheap deal right now and is signed through the 2022 season. But, if you played a wideout at running back last year, it’s probably a good idea to add running back depth.

The Bears should add depth through the draft. There will be some talented running backs available in the fifth or sixth round. I am thinking of Trey Sermon, Demetric Felton, Rakeem Boyd, or maybe someone like Kylin Hill, Chuba Hubbard, or Larry Roundtree fall to them there. Running backs have been going later and later in NFL drafts, and I think this is a reasonably talented class. This class doesn’t have the top-end talent that last year did, but there are plenty of adequate running backs in this class.

How The Bears Should Approach The NFL Draft

What does all of this mean for the Bears, and what is the plan? I think the Bears sign Fitzpatrick and draft Kellen Mond in the third is still the best initial approach. Second, for sure, cut Jimmy Graham. That only leaves the Bears with two tight ends on the roster, but plenty of free-agent tight ends are available. I would look to bring one to two well-rounded veterans like Seth Devalve or Jake Butt. Kmet is the future, and there is no reason to chase high-priced tight-end talent.

Next, the Bears still need to decide what they are going to do with the offensive line. I would use the 20th overall pick to get a lineman that I believe is the most talented that is still available. There should be plenty of talent on the board with the 20th pick. If there isn’t an offensive lineman to take at 20, the Bears should look for a wide receiver. Either way, with the 20th selection, the Bears need to look at filling holes in the roster with high-end talent.

The second-round selection is no different. If I were the Bears, I would still be looking to fill both OL and WR spots on my team. Even if the Chicago Bears franchise tags Allen Robinson, Anthony Miller is a free agent next year. Miller has been a bit of a letdown, but he still plays a significant amount of snaps. Last year Miller had 49 catches on 76 targets and started six games.

With the third-round selection, the Bears should be taking Kellen Mond, and there is no fourth-round selection. That leaves rounds five, six, and seven to find some running back depth. In reality, the Bears should probably look to grab that running back depth in round five. Especially if Chicago isn’t interested in signing Montgomery to a long-term deal, and frankly, I don’t see any need in the Bears even persuing that.

I am suggesting this approach and focusing more on the draft, and the Bears don’t have the luxury of chasing high-priced talent on the free agent wire. The tight ends I mentioned are low-cost solutions. Suppose the Bears want to look at low-cost solutions at the wide receiver spot. They need to look at players like Rashard Higgins or Tim Patrick. I don’t see a need in chasing someone like Curtis Samuel as to me, and the Bears already have that type of player with Darnell Mooney. If there is no Allen Robinson, they need a physically bigger reciever.

I would not chase any free agent running backs. The running backs cost is much lower when you draft a running back and sign them to that three to four deal. It’s by far the most cost-effective solution at that position. If the bears do any significant free-agent signings, I expect it to be with the offensive line. The problem is, I have no idea how they are going to free up the money to get the type of talent the Bears need for that offensive front.

Quite frankly, I feel bad for Chicago Bears fans right now. That team is close to being a consistent winner if they could get the offense figured out. The problem is, they have a lot of holes to fill and not enough money to go around to fill them all without doing some significant shuffling of the roster.