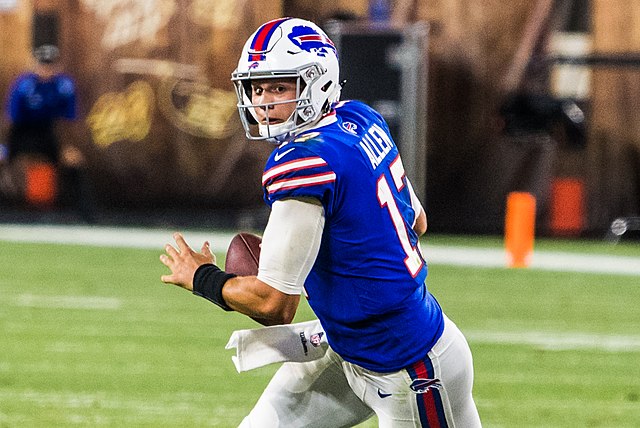 Week 3 is around the corner & it’s clear the MVP race will start to get fascinating. With that said, we are going to take a fun & crucial angle by untwining the top 10 MVP candidates heading into Week 3.

Heading into the 2022 season, the Buffalo Bills QB Josh Allen was a heavyweight MVP favorite. After two weeks and a splash of Thursday Night Football, Allen is unequivocally the MVP favorite.

The Bills signal-caller has ousted several passing touchdowns (one rushing TD), two interceptions, and led his squad to a 2-0 record thus far. Allen’s lead weapon, Stefon Diggs, was on another planet in Week 2 with 148 yds and a whopping 3 TDs. Per Vegas Insider, Allen is pegged as the 2022-2023 MVP favorite. It should be stated that it’s also MVP is a QB’s award — as 2012 was the last time that a non-QB (who was Adrian Peterson) won the award.

Of course, it would be an understatement to say that Allen has come a long way in his career.

The Kansas City Chiefs illustrious signal-caller Patrick Mahomes is still magical without his once-speed demon WR Tyreek Hill. In his two first games, the Chiefs QB has unveiled 7 passing touchdowns, 73% completion percentage, and a 127.9 passer rating. Mahomes, also known as Skip Bayless’s crush, is firing on all cylinders with his greek god-like TE in Travis Kelce, JuJu Smith-Schuster, and deep-threat wideout in MVS.

Let’s not forget that the Chiefs QB has already defeated his archnemesis, Justin Herbert.

The mythical Buccaneers QB Tom Brady finally managed to beat his despised foe in the Big Easy last weekend. TB12 has a scary defense (featuring Shaq Attack, Lavonte David, and Joe Tryon) — similar to the defense that was on his Super Bowl-winning squad. His D will undoubtedly help him win a plethora of ball games. It needs to be stated that Chris Godwin has been banged up & he will put up much bigger numbers with his favorite slot WR. I really believe that Brady is on a stacked team and he will win most of his showdowns, which was a massive factor in Aaron Rodgers being crowned MVP over him last season.

After a common MVP favorite in Tom Brady, the world should acknowledge that the young Dolphins QB can legitametly win MVP. He tossed a whopping six touchdowns against a mighty Ravens defense (which is double crazy). He arguably has the best WR duo in the league and a Da Vinci-like HC. I trust in Tagovailoa having a few more unearhtly performances. If he is also able to dismantle the Buffalo Bills twice, it would be hard to deny his status.

I was on the Justin Herbert train heading into the season, but he seems like the second best QB in his divison at this moment. Herbert is still carrying an impressive 2021 season in his back pocket & it’s clear he’s trending upward on the fountain of youth. He has thrown 3 TDs in each of his prior two match-ups. The question is: can Herbert win enough big showdowns this season?

Lamar Jackson has been impressive the opening two weeks of the season, maybe trying to show how much he deserves a lucrative contract extension?

Jackson is a darkhorse contender for MVP this season, already demonstrating not only the sensational rushing game he possesses, but a passing game to match. The Raven let number one wide receiver, Marquise Brown leave during the off-season, joining the Arizona Cardinals. But Jackson and The Ravens don’t seem to have missed him, utilizing the abilities of the second-year receiver, Rashod Bateman, and fellow receiver, Devin Duvernay to rack up the yards and touchdowns so far this year. The return of running back, J.K. Dobbins could help Jackson, even more, this season.

Jalen Hurts has been one of the top running quarterbacks since joining the NFL and the Philadelphia Eagles. There has been no question about his ability to gain yards and rushing touchdowns. Still, there have been reservations regarding his throwing ability, and if he could be a dual-threat quarterback going forward.

With the addition of wide receiver, A.J. Brown to the Eagles offense, Hurts has been able to demonstrate his throwing potential with great success. Hurts threw for 243 passing yards against the Detroit Lions with most of those yards going to Brown, along with racking up an impressive 92 rushing yards and a touchdown.

Justin Jefferson was a breakout star last season for the Minnesota Vikings, with many expecting and hoping for more from the star wide receiver. So far those people have had their wishes come true.
Jefferson is already looking like the complete package, an accomplished receiver who has the ability to break away from cover with ease and has the speed to leave defenders in his tracks. Following an incredible week one, Jefferson did have a quieter week two but so did the rest of the Vikings who struggled all night to find any rhythm. But Jefferson has shown everyone what he is capable of and if he can produce more displays like we know he can, then he will definitely be mentioned around MVP time.

The Bills were being discussed as Super Bowl favorites before the season started, and they have looked unstoppable so far in the opening two weeks. Josh Allen has driven this team each week and like others on this list, is a superb dual-threat quarterback with his throwing and running game.
But one player other than Allen who has been on fire the opening two weeks has been wide receiver, Stefon Diggs. In his week one matchup, Diggs combined with Allen for 122 yards and a touchdown. Week two day Diggs catch 12 of 14 targets for 148 yards and three touchdowns over a usually strong Titans defense. Diggs has started like a bad out of hell and if he can maintain these levels of performance and stats, he could be a dark horse for MVP this season. But he would face stiff competition from his quarterback Allen.

Kyler Murray has already proven that not only does he probably have the greatest rushing game of any quarterback in the NFL, but he can also throw a great ball (let’s all remember the Hail Mary to Hopkins). But what could stand in Murray’s way of being the MVP come the end of the season is his teammates. The Cardinals are already without star receiver Hopkins for the first six games of the season due to suspension. But sadly for Murray, none of the receivers have so far stepped up to the mark, and the Arizona offensive line has struggled to give Murray the time and space to utilize his legs and run game.
if the Cardinals can get everyone pulling in the right direction, this team has a lot of potential with a quarterback of great dual-threat ability. Kyler could easily finish the season as MVP but it will come down to his team helping him out a lot more than has been shown already.