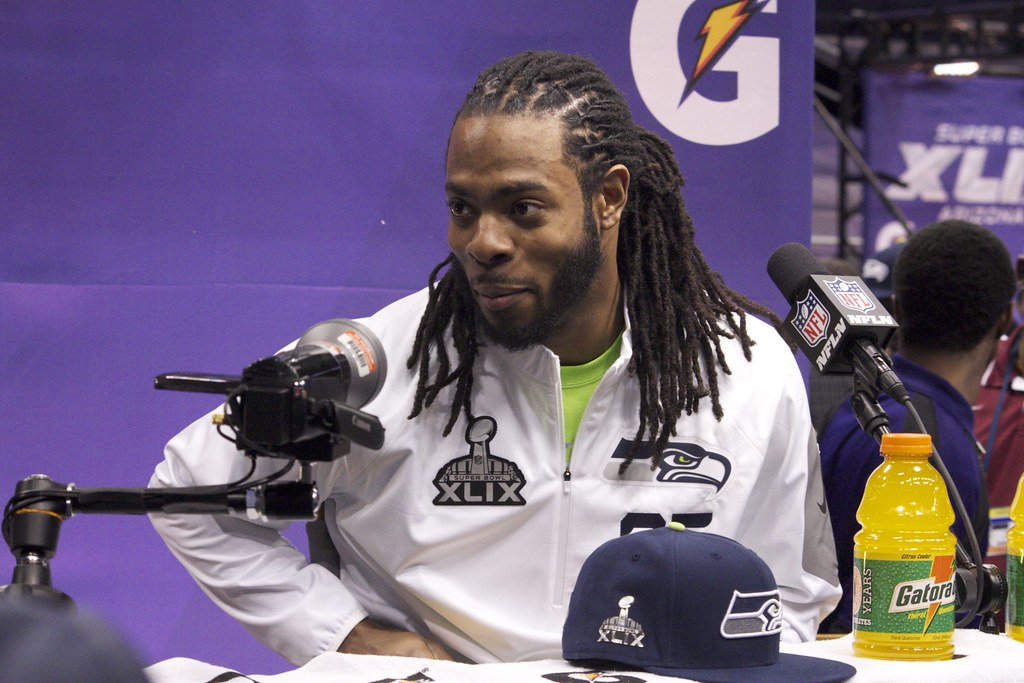 "Richard Sherman talks to the media at Super Bowl XLIX media day" by WEBN-TV is licensed under CC BY-ND 2.0

Since entering the league in 2011, Richard Sherman has been one of the elite Cornerbacks across the NFL. Immediately making an impact, Sherman earned three consecutive 1st team All-Pro honors in 2012-2014.

His involvement in the legion of boom became well documented as he became the standard for corners in the early 2010s. In the 2013 NFC Championship Sherman made the historic “Immaculate Deflection” play and unforgettable comments on being the best CB in the league.

Sherman was rewarded with the highest-paid contract for a CB in NFL history at the time. His run with the Seahawks ended in 2017 when he tore his Achilles in Week 10 of that season.

However, in 2018, Sherman took his talents to play for division rival, San Francisco 49ers. His first year with the new team was statistically one of the worst of his career and he earned his lowest Pro Football Focus grade in his career with 68.9 ranking him 51st out of 125 CBs.

Like all great players, Sherman bounced back. The next year Sherman earned All-Pro honors again this time as a Second Team member.

2020 was a rough season for Sherman dealing with a calf strain only saw action in five games. Sherman is set to be a free agent and said himself in early December of 2020 a return to the 49ers is unlikely, “But there are 40 free agents and they’ll probably have $30 million or less in cap and they have got to bring back Trent, who costs over $20 million.

They have to pay Fred, who costs $18 million-plus a year. So anybody who knows the situation understands that.” Where will the NFL 2010s All-Decade team CB end up? Here are 3 potential landing spots for Richard Sherman.

The Cleveland Browns have re-emerged in the NFL and look to build upon their strong 2020 campaign. At this point in Sherman’s career, he has to be looking to contend for Super Bowls. Yes, I just put the Browns and Super Bowl together moving forward. Wild!

I believe the Browns would be a good fit for Sherman for multiple reasons. The primary being Joe Woods. The defensive coordinator of the 2020 Cleveland Browns has 26 years of NFL coaching under his belt and was the defensive backs coach in San Francisco in 2019.

In 2019 under his coaching, Sherman returned to an elite form and a reunion and comfortability in the system would fit Shermans play.

The Browns pass defense was middle of the pack this past season. Allowing 247.6 yards per game via the pass and 26.2 points per game. This defense has a player of the year prototype in Myles Garrett. Better coverage in the secondary forcing QBs to hold the ball would do wonders for Garrett and company. Adding Sherman to a mediocre defense wouldn’t hurt and may allow them to get into the elite territory.

The Browns secondary is incredibly young. Their top CB is Denzel Ward is still young in development but on the brink of emerging as a shutdown corner. Playing opposite Ward is Greedy Williams, also a young guy who was a second-round pick in 2019. The other CBs on the Browns roster, Kevin Williams and Terrance Mitchell are set to be free agents this year. Bringing in Sherman would add a veteran presence, wisdom, a mentor, and talent to a young talented core of CBs.

Sherman will also have to weigh the room to play when making his decision. With two talented young guys, what role would Sherman play? Greedy Williams has been on IR all season and hasn’t played at all. His speed, quickness, and length would make a solid slot fit.

With Sherman and Ward on the outside that’s a talented trio of corners who can cover and allow pass rushers like Garrett to get home and pile up sacks. Sherman playing opposite Ward would likely mean he sees a lot more targets and can play aggressively which would fire up the veteran and allow him to be his normal competitive self when on the field.

This will require Sherman to prioritize winning over money. At this point in his career, I feel like he’s on the winning side. Over his career, Sherman has made over 82.7 million dollars from football alone, according to Spotrac. I’m sure his endorsements and other sources of income have set him up for the considerable future. Sherman also is a football team owner of a franchise in the Fan Controlled Football League. With that being said, and money not, a real issue, winning with now with the Buccaneers is an option.

Assuming the QB for the Bucs is Tom Brady, they will remain contenders. Brady proved another year of age hasn’t destroyed the ability to win. Brady and the Bucs went 11-5, throwing for 40 TDs, and has the team competing to earn a berth in the NFC Championship this weekend.

The Buccaneers defense under Todd Bowles plays with aggressive, creative, blitz heavy packages. They allow the athletic linebackers to flow to the ball and let the DBs make plays. Although the Bucs are among the top 3 run defenses by almost all metrics the pass defense could use some help. Allowing nearly 4000 yards passing and 29 passing TDs, places them just outside the bottom 10 in the league.

Sherman would be a welcomed asset in shoring up the pass defense. However, the Buccaneers have decisions to make on Lavonte David, Chris Godwin, Ndamukong Suh, and Shaquil Barrett as free agents. All will take up valuable cap space. However if one of them is unable to be resigned Sherman would become a target to get.

The secondary of the Bucs currently has 3 young corners in Jamel Dean, Sean Murphy-Bunting, and Carlton Davis. Dean and Murphy-Bunting are in year two with Davis in year 3. Rookie Antoine Winfield Jr. starts at a safety spot right now as well. Sherman’s veteran presence and knowledge can help the team and these young guys development.

A smart veteran in Sherman could quickly learn Bowles elaborate scheme and creative defensive principles and fit the scheme. Taking a pay cut to win is fitting for Sherman at this point in his career. The Buccaneers provide a good fit for the veteran heading into 2021.

The Colts current defensive scheme would bring tremendous comfort for Richard Sherman. Defensive coordinator Matt Eberflus has implemented a lot of cover 3 into his defensive scheme.

Cover 3 is the scheme Sherman made his name in when playing in Seattle. If Eberflus doesn’t leave as a head coach he will likely return with the same scheme and need players to fill the defensive back spots.

The Colts are projected to have the third-most cap space heading into the offseason. Clearly, some of that money will be used to get a QB. With a QB and space to add Sherman, the Colts can build on recent success and put together a team to compete for a Super Bowl.

Veteran CBs Xavier Rhodes and Travis Carrie are free agents this season. This leaves young CB Rock Ya-Sin as a starting outside CB next year and Kenny Moore to play the nickel and outside when needed. The need for a CB is there and Sherman can come to Indy and play for a contender and not have to take a paycut.

The Colts defensive production is very similar to the Buccaneers. They were right behind the Bucs in rush defense, amongst the best.

In Pass defense very similar as well, nearly 4000 yards and 24 TDs allowed via the pass. The Colts best defensive player is Darius Leonard. A talented young LB who is a DPOY candidate can benefit from Sherman’s addition to the team as well. Leonard would be able to play much more aggressively underneath knowing Sherman would have coverage over the top.

The comfortability with the cover 3 scheme would fit Sherman beautifully. With diminished athleticism, his knowledge would allow him to excel in a role and his production will be high.

The Colts have been contenders each year under Reich as the head coach. With money to spend at QB, knowing the Colts have a guy who can win under center would allow Sherman to have a chance to win immediately at this point in his career. With two young talented CBs already on the roster, Sherman doesn’t have to do it all by himself and could cover any WR opposing him.

With Robert Saleh if given Head Coach job