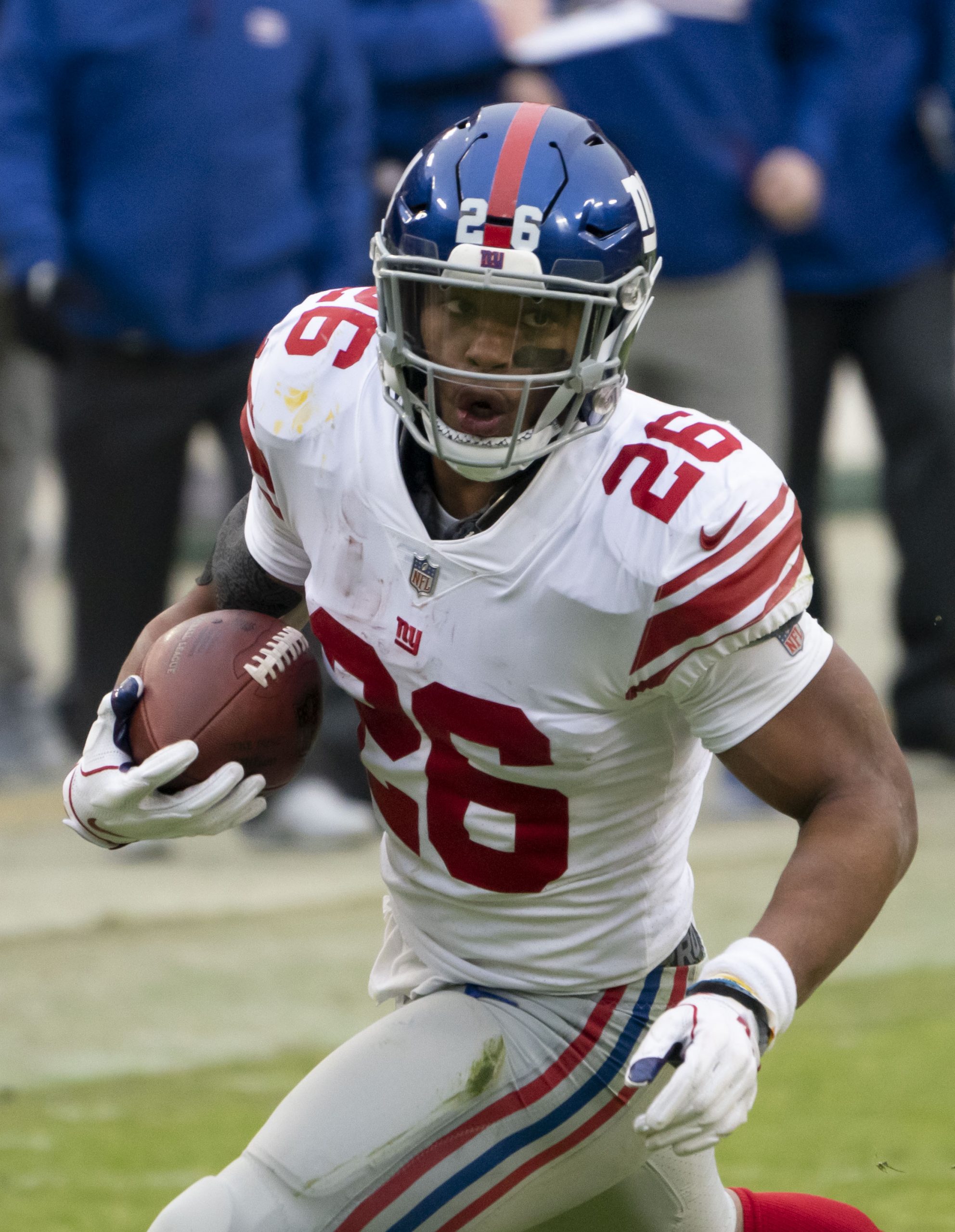 What is the outlook of Giants RB Saquon Barkley

When Saquon Barkley came to the NFL out of Penn State in 2018, Barkley was a generational talent at the running back position. The Giants front office raved about his skillset, with general manager Dave Gettleman saying, “I have never seen a player like him in my 30 years evaluating talent.”

In Saquon’s rookie year, he set the league on fire. In his first career game, a loss to the Jacksonville Jaguars, Saquon ripped off the first of many breakaway runs for the G-Men. Barkley’s skill and athleticism are undeniable: there is perhaps no better running back in the league when healthy. That said, Saquon’s past two years have disappointed fantasy players.

An early high ankle sprain derailed much of his 2019 season. While he ended that year on a high note and finished as an RB1, he was not productive for much of the season. Saquon’s 2020 season was over when he tore his ACL and MCL against the Chicago Bears early on in week two.

Saquon is expected to make a full recovery before the 2021 season, but should he cost an early 1st round startup pick?

The Benefits That Come With Owning Saquon

In owner John Mara’s most recent news conference, he told reporters that he expected Saquon to be a Giants for a long time. These words should ease any worries about his long-term status, as he will likely be on Big Blue for the prime of his career.

The Giants’ ownership does not often comment on contract matters, so their word should be taken as gospel. Mara’s comments should lead you to make transactions with the assumption that Saquon Barkley will be a Giants for years to come.

Workhorse running backs are growing scarcer every year, and the Giants have not shied away from giving Saquon 20-25 touches a game. Saquon’s volume gives him such a high floor, and his skill gives him a ceiling matched only by players like CMC, Kamara, Cook, and Henry.

During his record-breaking rookie season, Saquon put up over 24 points a game (PPR format). If he even gets back to producing 80% of what he did as a rookie, he will be a locked and loaded top 5 running back.

Although his current ADP is RB4, his range of outcomes certainly includes an excellent shot at the RB1 title.

The Risks Involved With Owning Saquon

Just like any other running back, Saquon’s lifespan is relatively short. We can hope that Saquon returns without a loss of athleticism, but there is a chance he will not be the same elite athletic specimen.

A healthy Saquon is a great player, but do not automatically assume we get a healthy Saquon–factor the risk into any transaction.

Another risk related to Saquon Barkley is the effectiveness of what the New York Giants decided to call offense in 2020. The offense averaged 17.5 points per game, good enough for 30th in the league.

While Saquon and a likely wide receiver addition, we will see a less stagnant offense. That said, The Giants’ offense will still have Jason Garret at the helm, so it may not produce many explosive plays for any of its weapons.

Saquon Barkley may be the most polarizing player in dynasty. When considering Saquon, think about where your roster is at the moment. If you are an immediate contender and can add Barkley to cement yourself as the likely favorite of your league, you ought to do it.

The 2022 rookie class is relatively weak and lacks depth, do not be afraid to give up those picks. The 2023 class has some elite running backs, but if you anticipate being a contender, that should not affect you.

Saquon is a buy at his current price if he immediately makes your team a powerhouse or keeps you in the clear lead dog role.

That said, if your team is likely to be in a productive struggle or the cellar, rostering Saquon does not do you much good. His long-term outlook is less bright given his risks and the age apex of most running backs. Your league will likely have a market for Saquon, but if no one is buying, wait until after the offseason. Some “workhorse” running backs will turn into committee members, and some will go down to injury at the start of the season. Exercise patience when selling top tier assets, as it is more likely that any one of your league mates will lose a running back than for Saquon to take a drastic dip in value.

Overall, Saquon’s value is entirely dependent on your roster. If you need immediate production, he is a buy. If you are in a startup draft, buy him knowing that your winning window is now. If you are playing for 2023 and onward, it would be wise to move on from him and avoid buying him unless the owner is selling him for extreme value.