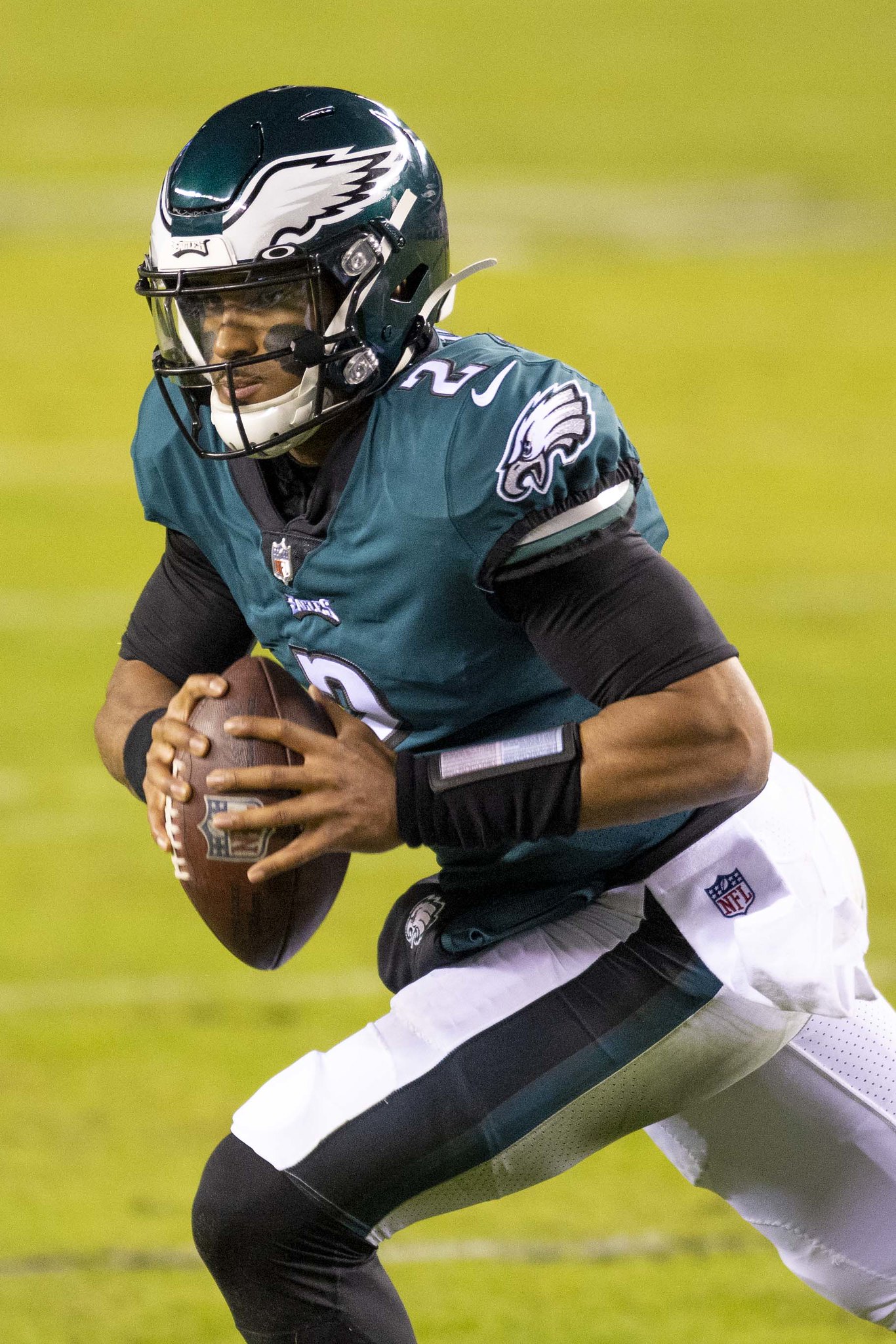 Which QB Needy Team Should Trade For the Young Dual-threat QB?

The Philadelphia Eagles drafted Jalen Hurts with their second round in the 2020 NFL Draft. It immediately raised eyebrows around the league because the Eagles already had Carson Wentz as their signal-caller and just signed him to a lucrative extension. Fast forward to the end of the 2020 season, and the quarterback situation is cloudy at best. Carson Wentz hit the bench after a string of sub-par performances. Jalen Hurts showed us what he does through the air and on the ground. Head Coach Doug Pederson will not return in 2021 after he led the team to a 4-11-1 record and missed the playoffs for the first time since 2016.

There is a new regime under Nick Sirianni, the former-Colts Offensive Coordinator under former-Eagles OC Frank Reich. It’s trending towards Wentz keeping his job heading into the 2021 campaign.

However, Hurts proved that he can play at the highest level and may not be satisfied moving into a backup role again. Could an offseason trade be in the works as the Eagles look to rebuild and reload under a new coach? Let’s break down five teams that should look to trade for the second-year quarterback.

Matt Ryan has led this franchise as close as a team can get to the promised land, but it could be time for a new face as the Falcons move into a new era.

Ryan signed a 5-year extension before the 2018 season, but the team has an out after the 2021 season. A Ryan trade or a release would be a significant cap hit and one that many will point out as a reason trade is unlikely. However, Hurts could bring mobility to the quarterback position that Falcons fans haven’t seen since the Michael Vick days.

Also, the former-Alabama quarterback would be reuniting with Calvin Ridley and be along a similar career timeline as opposed to the 35-year old Ryan. Ridley and Hurts combined for 135 catches and 1,736 yards in their two seasons together in Tuscaloosa.

A reunion in Atlanta could give the franchise a soft reset as they usher out the Matt Ryan and Julio Jones era. New Head Coach Arthur Smith comes from the Sean McVay/Matt LeFleur tree, where play-action is a huge key to their offense, and it would be an ideal fit for a Hurts landing spot.

According to reports, Matthew Stafford will not be the starting quarterback for the Detroit Lions when September rolls around.

The Lion’s newly-hired Head Coach, Dan Campbell, will be in charge of rebooting the franchise that has only made three playoff appearances since the turn of the century. Pairing Detroit’s rising star, D’Andre Swift, with Hurts would create a mobile quarterback-running back tandem similar to those developing in Arizona and Baltimore with Kyler Murray and Lamar Jackson.

This move would also build genuine excitement around a franchise that has lacked electric play-making ability since Calvin Johnson’s days.

After the Divisional Round defeat to the Green Bay Packers, listening to Sean McVay’s postgame comments made it clear he is not sold on Jared Goff as the Rams quarterback heading into the 2021 season.

Obtaining Hurts would involve the Rams moving on from Goff’s massive extension. However, it would enable enormous cap flexibility with the second-year quarterback still being on a rookie contract for a few more seasons.

Much like Detroit, pairing Hurts with Cam Akers would create an incredibly fun tandem to build an offense around with Robert Woods, Cooper Kupp, and Van Jefferson as the receiving options. McVay hasn’t had a mobile quarterback to pair with his dynamic set of weapons in Los Angeles.

Moving on from the statuesque Goff to the incredibly mobile Hurts would open up another door to the Rams offense next year.

There have long been thoughts that Bill Belichick wanted a mobile quarterback to scheme an offense around. Well, it didn’t work out so well with Cam Newton and his poor throwing ability, but there was some early success in the 2020 experiment. Why not do it again, but upgrade the most important position.

Hurts can run and pass better than Newton at this point in his career, and it could be exactly what the Patriots need to return to the postseason quickly. It would help if the Pats added some receiving threats. However, Hurts has the pedigree and performances to be exactly what New England wants.

Plus, Belichick and Nick Saban are long-time acquaintances, and he could get the 411 on his new quarterback right from the source. Sabam has given glowing recommendations about Hurts’ attitude at Alabama. That would be right up Bill Belichick’s avenue as he looks for his next franchise quarterback.

It seems to be the prevailing thought around the league that Jimmy Garappolo is not long for his current team. The 49ers missed the playoffs one year after making the Super Bowl due to a rash of injuries, but it seems the franchise is ready to move on from the quarterback.

Garappolo has missed 23 of the 49ers last 52 games and only has one healthy season under his belt heading into his age 30 season. He will count for $26 million against their cap in 2021, but they can save $23 million with a trade or a release this offseason.

Getting Hurts to San Francisco is another situation where his mobility and passing skills would bring another dimension to a team’s offense. Shanahan knows how to use every ounce of talent on the roster, and it would be fantastic to see how he utilizes Hurts’ skillset.

Combine Hurts with the rising receiving group of George Kittle, DeeBo Samuel, and Branden Aiyuk, and the 49ers could be back to the cream of the NFC crop in no time at all.