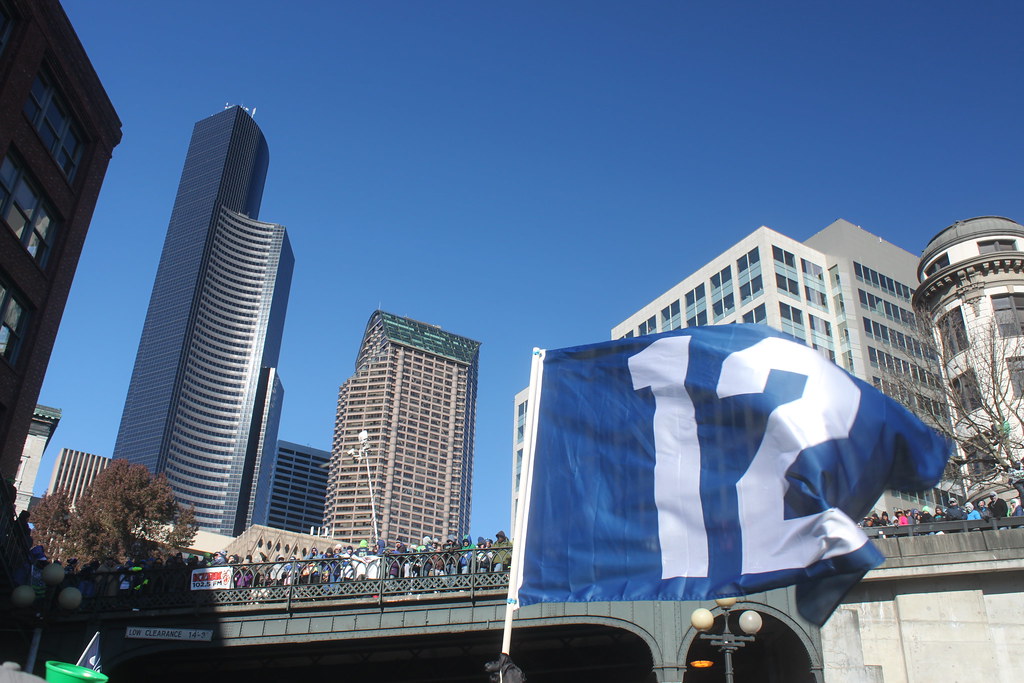 "Seattle Seahawks Super Bowl XLVIII Parade" by lawdawg1 is licensed under CC BY 2.0

Which Free Agents Will Help Seattle Win Another Lombardi Trophy?

After a blistering start to the 2020 NFL season, the Seahawks year ended on a disappointing note. Seattle lost a home playoff game on wildcard weekend to the Los Angeles Rams. The Seahawks staggered their way to the playoffs; the last ten weeks saw Seattle stumble home like the local drunk going home from the bar. After that hot start when Russ was cooking, the Seahawks never looked like Super Bowl contenders; even with a superstar quarterback under center. There were too many obstacles to overcome for the Seahawks; ultimately, they weren’t good enough. They need free-agent help.

With the season over, the ‘Hawks turn to the offseason in earnest. Free agency is looming large, which will be a critical part of the offseason for Seattle. The team is not far away from challenging; to do that, Seattle must acquire some top-tier free agents to bolster the team. If GM John Schneider and coach Pete Carroll can do that, the Seahawks can get themselves back into championship contention. Although it will require some smart cap management; Seattle is lacking cap space in 2021. It could be a challenging offseason in the Pacific North West. Seattle must hit home-runs on their free-agent signings.

Hunter Henry is now available as a free agent. The bruising 26-year-old tight-end would be a considerable upgrade for Seattle. Jacob Hollister and Will Dissly are excellent depth guys at tight-end; they are not the premier tight-ends that championship teams own on their roster. Henry can fix that; In 2020, the Arkansas alum posted a year with 613 yards receiving from 60 receptions. Henry’s biggest asset is his physicality. His build makes him look like Rob Gronkowski’s little brother; he is an imposing athlete. That can create a matchup nightmare for the opposition defense. With Seattle owning two legitimate deep-threats in DK Metcalf and Tyler Lockett, they can create space underneath for Henry.

Henry shone in 2020 due to his YAC. In 2019, Henry’s YAC was 164, that jumped up to 226 in 2020. Russell Wilson is excellent throwing darts over the middle of the field, in Henry he would get the best weapon available to add a new element to the offense. Henry is still raw; nevertheless, there is plenty to work with, the Seahawks can develop him into a pro-bowl tight-end.

The Seahawks endured a tricky time to pressure the passer in 2020. Safety Jamal Adams led the team in sacks with 9.5 for the season. That is an excellent return for Adams who arrived in Seattle after a trade with the Jets. The issue with using Adams in a blitzing role is that it takes away from the defensive backfield. Adams can do so much more than just pressure the quarterback. Therefore, the Seahawks must invest in the front seven. We saw in the Super Bowl that pressuring the quarterback is still a decisive part of the NFL. Enter, Yannick Ngakoue; the former Jags player struggled in Baltimore. The Ravens 3-4 formation didn’t suit him as he is a pure defensive end.

The 4-3 base Seattle employs would be a better fit for him. Ngakoue is fantastic with his hands on the ground as he races to the quarterback. Despite his difficulty with the system, Ngakoue still notched eight sacks. That would’ve placed him second in Seattle. At 25, the free-agent pass rusher is not old. He can add a different dimension, specifically speed to the Seattle offensive line. In doing so, Seattle can deploy Adams in the backfield to help shore up that leaky secondary. All three defensive levels complement each other; they must fit like perfect lego pieces, Ngakoue owns the talent to help do that for Seattle.

It feels like the NFL world watches Russell Wilson run for his life every year. The quarterback always seems to play behind a very suspect line; it leaves Wilson needing to scramble far from ideal, no matter how good he is at scrambling. Duane Brown is a solid left-tackle; he protects Wilson’s blindside impeccably well. Conversely, there are concerns about the guards on the Seattle line. Mike Iupati got dominated by Aaron Donald in the playoffs. The left-guard position needs to get upgraded. Joe Thuney is a former second-team all-pro who provides Super Bowl-winning experience to the group.

Thuney became the stalwart in New England as he protected Tom Brady in two runs to the Super Bowl. The guard never is durable; he’s never missed a game due to injury in his four-year career. One of Seattle’s most prominent issues was getting consistent performances from their offensive line, specifically in the ground game. The Seahawks offensive line ranked 16th in run-block success; Thuney’s playing in the 2020 Patriots run-heavy system should improve that in Seattle. The Patriots ranked 10th in run-block success. Thuney can fortify the left side of the line for the Seahawks. In a division with Nick Bosa and DPOY Donald as mentioned earlier; it will be critical.

The Seahawks were once famous for the Legion of Boom. It was a secondary that dominated teams during their back to back Super Bowl trips. 2020 saw Seattle fall short of that high bar. In fact, at various times, the secondary stunk. Seattle finished 31st in passing yardage allowed per game. That is not sustainable if they are to make a run at the Super Bowl. Troy Hill from the Rams would be the perfect signing. Hill was a critical cog in the Rams’ defensive machine; the Rams finished as the best pass-defense in the NFL. Playing opposite Jalen Ramsey allowed him to be aggressive on the field.

Hill enjoyed a career year with a record number of pass deflections while adding three interceptions to his stat sheet. Hill is a ball-hawk; he plays with intensity and superb anticipation. He started all 16 games for LA, the passer rating he surrendered when targeted was 89.8. Moreover, Hill’s DADOT number of 6.6 is absurdly low compared to the rest of his career. Hill broke out in 2020. With Adams already in the backfield, Seattle can utilize Hill much more aggressively; Adams and Hill can form a dynamic duo in the Seattle secondary and weaken a direct rival. With Shaquill Griffin now a free agent, it could be an inspired move.

After hitting the Super Bowl jackpot, Ndamukong Suh may look for a new challenge as he is a free agent. The former Lions star demonstrated that there is plenty of fuel left in the tank in 2020. Suh led a dominant defense to victory in Super Bowl 55. Even at his veteran age, Suh is still a brilliant run-stuffing tackle. Tampa Bay was the best run-defense in the NFL in 2020. Suh is still the physical monster that he was when he first arrived in the league. Several times in the Super Bowl, Suh could blow past his blocker and penetrate the pocket. His statistics in terms of pressures, quarterback hits and sacks were all improvements from last year. Even on a one-year deal, Seattle could do with his wisdom and leadership.

Signing Suh would be a clear improvement on Poona Ford and Jarran Reed. If they could pair him with an explosive speed rusher like Ngakoue, the Seattle defensive front becomes an entirely different proposition overnight. From that, Seattle can build a pass-rush to get after quarterbacks.