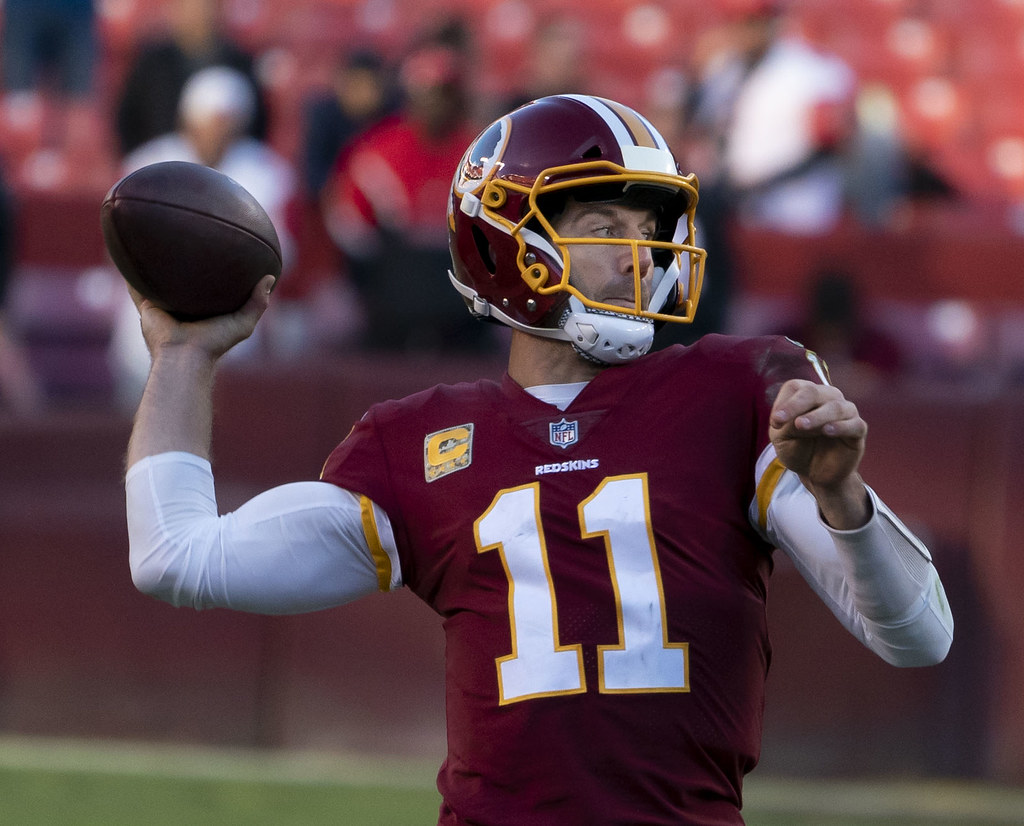 Can Alex Smith Still be a Starter in the NFL?

After coming back from one of the more serious injuries in NFL history, Alex Smith aims to continue playing next year. He played in eight games, taking over as the starter after Dwayne Haskins failed to meet expectations. Smith finished with 1,582 passing yards, six touchdowns, and a 66.7% completion percentage.

Smith just okay in the games he played in. It wasn’t anything spectacular to behold. However, he played well enough to where he could still play at least one more season in the NFL. With the Washington Football Team moving on with Taylor Heinicke and possibly another young quarterback, Smith will be searching for a new home next year.

In an article written by Zach Koons, the author states, “According to ESPN’s Jeremy Fowler, Smith isn’t ready to retire just yet and ‘does want to play somewhere’ next season. He’ll be 37 by the time offseason workouts ramp up this summer, but still hopes to find a role in 2021.”

Although Smith isn’t the QB he used to be, he can still provide excellent veteran leadership for any franchise. There seems to be only one team Smith may earn starting time for, however, everywhere else would use him more as a high-end backup. Here are three top destinations for Alex Smith.

A Potential Starter for the New England Patriots?

The only team who could potentially use Alex Smith as a starter, the New England Patriots are at the top of the list of top destinations for the 16-year vet. The Patriots had one of the worst offenses in the league this season. They finished 30th in passing yards (3,124), 32nd in passing touchdowns (12), and were in the bottom five in interceptions thrown (14).

They’re not one of the most desirable destinations in the league anymore after Tom Brady’s departure. It’ll be difficult for the front office to acquire top talent through the free-agent market. For that reason, this franchise will have to nail the NFL draft before returning to relevancy.

The Patriots may select a rookie in the draft this year, and according to Zack Cox at NESN, finding QB talent in the draft is typically found in the early first round. He states, “Recent history suggests the safest place to find a franchise QB is in the top 12 picks of the draft.”

With that said, it may be a smart move to sign Alex Smith either way. He’s good enough to play competitively and would be a great player to learn behind for any rookie quarterback. However, if Alex Smith is truly searching for playing time, signing a deal with the Patriots is his best bet.

It was a rough year for Drew Lock, as he dealt with injuries throughout the season. Furthermore, while he was on the field, he struggled through most of his games for the Denver Broncos. The team only finished with 3,673 passing yards, and 21 touchdowns, ranking them at the bottom of the league in both categories.

There have been numerous reports of Denver’s front office showing interest in trading for Deshaun Watson. The Houston Texans haven’t made any claims they’re selling their superstar quarterback, but it seems the Broncos are favored to get a deal done this offseason.

It may take quite a bit for the Broncos to pull off that feat. Sayre Bedinger, a writer at Fansided, seems to agree. The author explains, “… Matthew Stafford being traded from the Detroit Lions to the Los Angeles Rams for Jared Goff and three picks, as well as Carson Wentz going from the Philadelphia Eagles to the Indianapolis Colts for two picks…”

The Broncos are clearly interested in trading for Watson, but at what cost? If the front office doesn’t want to give up a ton of draft capital, they may be searching for a veteran leader to take over in case Lock goes south again.

For Alex Smith, this would be a similar situation he was in during 2020. He’d come in as the backup behind a young quarterback but have a fair chance of earning legitimate playing time. I like this potential destination for Smith, as he could provide better QB play to help the Broncos improve next year.

It was a horrendous year for the Philadelphia Eagles as they struggled in nearly every game in 2020. Carson Wentz was recently traded away to the Indianapolis Colts, giving the starting job to Jalen Hurts. The Eagles aim to improve their passing game after finishing with just 3,728 passing yards and 22 touchdowns, making them one of the worst offenses through the air.

The consensus is that Jalen Hurts jumps in as the starting quarterback of the Eagles. However, there are reports the front office plans to bring in some competition for their young quarterback. In Michael David Smith’s article for Yahoo Sports, he claims, “But the job isn’t being handed to Hurts. Instead, the Eagles plan to bring in competition for Hurts, according to ESPN.”

For that reason, this could be a fantastic landing spot for Alex Smith. It’s not likely he plays in Philadelphia, but this could be a great signing for Jalen Hurts’ development. Smith played a similar style throughout his career but stayed in the pocket more often than not. With Hurts a running QB, Smith can be a great mentor for the young prospect.