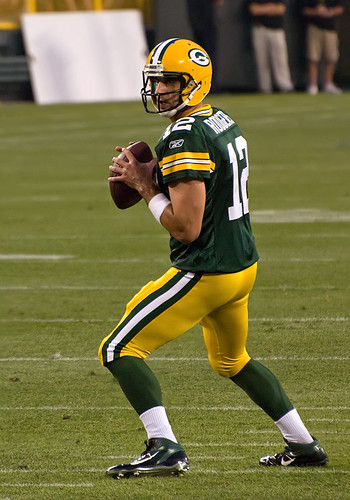 "Aaron Rodgers" by Mike Morbeck is licensed under CC BY-SA 2.0

The Chicago Bears are a storied franchise and have a long history as one of the founding teams in the NFL in 1920. The Bears have accumulated the most wins in NFL history slightly ahead of rival Green Bay Packers founded a year later. These two teams are longtime rivals and have had many battles in the “Black and Blue Division” better known now as the NFC North.

The NFC North as we know it today began in 2002. Since then the Chicago Bears have been named division champions four times, most recently in 2018. Their rival Green Bay Packers have won the North 11 times in that same span. Largely because of superior quarterback play from Favre and Rodgers. Since 2008 when Rodgers became the starter the Packers have really dominated this division including winning the title the last two years.

The Packers NFC North run is now in “Jeopardy!” in relation to the Aaron Rodgers saga. As many know Rodgers has drawn a line in the sand with management and wants things to change. If Rodgers leaves the Packers what does that mean for the NFC North? Do the Bears rise as the frontrunners for this division in the immediate future?

Respectfully we can rule out the Lions. They are in serious rebuild mode and now have downgraded significantly at quarterback going from Stafford to Goff.

The Vikings are in an interesting position. They are projected to win 8.5 games by Vegas oddsmakers. With an extra game in the upcoming season, this means they will be around .500 or so. The offense will be conducted through Kirk Cousins still. Who, if Rodgers leaves, is the best veteran quarterback in the division. Cousins has one playoff appearance and is not the guy the Vikings are paying him to be. Cousins received a massive contract from the Vikings in 2018 and is under contract for two more years. Cousins is 25-21-1 for Minnesota in his career.

Defensively the Vikings were pretty bad last year across all metrics. However, they had some big injuries and a few COVID-19 opt-outs that hampered the defense. With the addition of Patrick Peterson, Xavier Woods, and Mackensie Alexander the secondary will be better. The front gets Danielle Hunter, Anthony Barr, and Michael Pierce back with the addition of Dalvin Tomlinson. The Vikings defense is poised for a bounce back and this will really help their team.

Windy City fans were not pleased with the Bears early in the offseason. Losing out in the faux Russel Wilson sweepstakes and signing Andy Dalton to lead the Bears offensively. Dalton will still likely start a bit of games in 2021 but the Bears offseason improved greatly via the NFL draft. With the steal of the first round and one of the best value picks of the night the Bears drafted Justin Fields at 11 overall after trading up.

The Bears will have two veterans in Dalton and Foles for Fields to learn from. We could see Fields after the Bears Week 10 bye in the newly released NFL schedule. Fields seems like the perfect fit for what Nagy wants to do on offense. Fields has the potential to be the best or second best quarterback in this class. He’s got all the tools and can be coached up to excel with the surrounding cast immediately.

Allen Robinson will be the top receiver for whoever is playing quarterback. Robinson is elite. The rest of the pass catchers include Darnell Mooney who broke out a little bit last year, Anthony Miller, Damiere Byrd, Jimmy Graham, Cole Kmet, and rookie Dazz Newsome. The running back room is very intriguing to me. Montgomery flashed and carried this offense to a playoff run late last year. He will look to prove he is the guy and follow up with a big season. Tarik Cohen will return after injury and the Bears have added Damien Williams who opted out of 2020. Williams’ last game was one in which he could’ve been named super bowl MVP with the Chiefs and he has familiarity with both Nagy (Kansas City 2017) and offensive coordinator Bill Lazor (Miami Dolphins 2014). The Bears also added two rookie backs who produced in college in Khalil Herbert from Virginia Tech and CJ Marable from Coastal Carolina.

The offense has guys to make plays. With one true superstar in Allen Robinson, the rest of the guys will need to step up and make plays when given the opportunity. Quarterback play could be rough with Dalton at times but he is capable of spreading the ball and putting points on the board. The offensive line is the weakest link on the offense and will be a problem.

When you think of the Bears you think of good defense. The Monsters of the Midway dominated the early 1940s, again in 1985, in 2006 the defense lead them to a Super Bowl appearance, and recently in 2018. The Bears defense will take a step back this year. Chuck Pagano retired following the 2020 season. The new defensive coordinator for the Bears is Sean Desai. Desai has been with the Bears on the defensive side of the ball since 2013. A familiar face in the building looks to carry over great schemes from Fangio and Pagano.

After starting 5-1 last year the defense regressed to a top 15 defense. This is likely where the Bears will finish this year as well. They will suffer a major loss at cornerback with the loss of Kyle Fuller. Veteran Desmond Trufant is tasked with filling Fullers’ shoes. Trufant is a former pro bowler back in 2015 and hasn’t played a full season since 2018. Eddie Jackson will be the best secondary player for the Bears, a former All-Pro in 2018. Jackson has 10 interceptions and six fumble recoveries in his career along with six touchdowns. Jackson has shown the ability to make game changing plays but had zero interceptions last year.

The defensive front is still in good hands. Roquan Smith patrols the middle of the field with veteran Trevathan. Mario Edwards and Robert Quinn can create pressure off the edge along with Khalil Mack. When healthy Akiem Hicks is a great Dalvin Cook stopper.

So what does this mean for the Bears in 2021 if Rodgers is not a Packer? Looking at their schedule the Bears have some tough games early combined with some winnable ones. Week 1 the Bears go on the road to play the first game in SoFi Stadium with fans vs the Rams. They play the Browns Week 3 as part of their tour versus the AFC North, and the Bucs in Week 7 both on the road. Those games look to be the testers early in the year. If they can get to the Week 10 bye at 5-5 with Fields ready to start the playoffs could be in reach. The final five games close with a meeting with the Pack at the frozen tundra and two games with Minnesota. If Rodgers is gone I see a 4-2 division record possible for the Bears, splitting with Green Bay and Minnesota while sweeping the Lions. Finding a way to 10 total wins gives them a chance at the playoffs and the division win with the expanded schedule.

The weakest spots will be the offensive line and cornerback. The offense should be better with the quarterbacks looking ahead. If not Nagy and crew will be fired. The defense can make plays and stay solid up front. If the corners step up and push the defense to a higher level the Bears will win the NFC North. A playoff return is in the cards for the Chicago Bears, bearing they play them right.