Why Washington Football Team should look to trade for Marcus Mariota 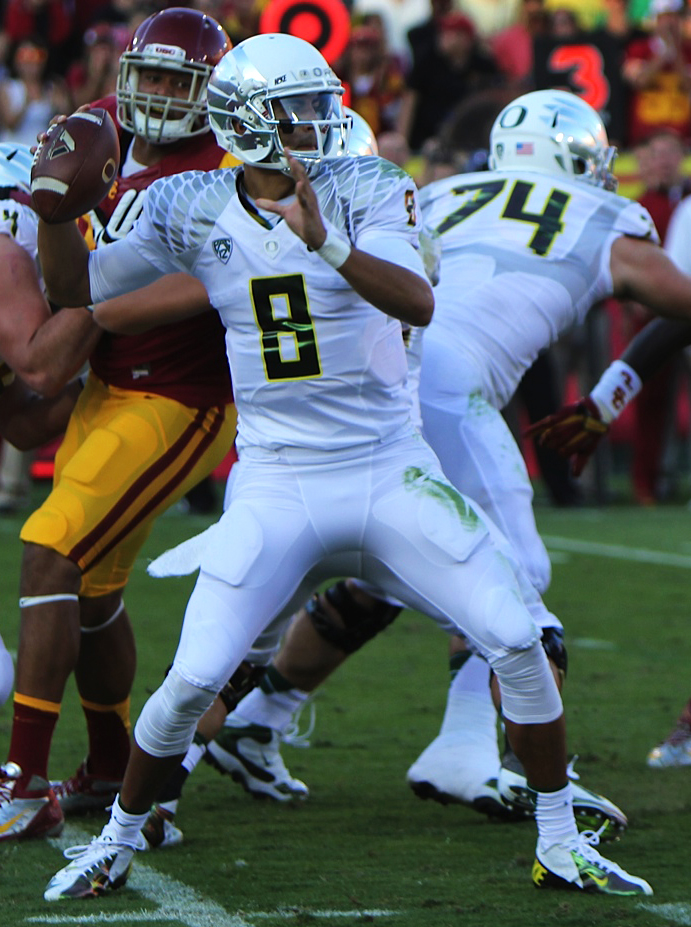 The Washington Football Team has one of the more interesting quarterback rooms in the league as of right now, and not really for a good reason, at least long term.  They currently have Ryan Fitzpatrick who will be a good bridge quarterback while they find another option.  They also re-signed Taylor Heinicke to a two-year deal this offseason, who flashed in the WFT’s one playoff game in the 2020-2021 season.  Neither of these options is seemingly long term though, as Fitz is higher up on the NFL age scale now and Heinicke is relatively unproven so far.

One of the QBs who has been on and off the trade block seemingly as of late is Las Vegas Raiders quarterback Marcus Mariota.  A former Heisman Trophy winner in 2014, and the starter for the Tennessee Titans for a period of time.  Currently he is locked behind Derek Carr as a backup QB to fill in if Carr misses time, as we saw for a game last season.  However, in this article I will be going over three reasons as to why the Washington Football Team should target Mariota in a trade, and why he could be a good QB option for them.

One of the most promising aspects of Marcus Mariota becoming a potential starter again is he now has a year under his belt learning from Derek Carr and Jon Gruden.  Starting with Carr, Derek has experienced quite a bit in the NFL and is a pretty exceptional quarterback for what he has had to work with in Las Vegas and previously Oakland.  Getting experience from an accurate and bigger armed QB like Carr will let him learn more about the NFL and about passing effectively, while being more safe with the ball.

He has also had time under Jon Gruden, who seems to follow the belief that quarterbacks do not need to do everything on the field.  I agree with this point to an extent, but Jon takes it to the level where rushing is extremely important for his teams and defensive aggressiveness and competitive toughness of his players is most important.  Mariota could stand to learn this mentality to an extent, as he was just thrown into a starting role with Tennessee and never given a chance to learn that he does not have to do all the work like he did with the Oregon Ducks in college.  Getting a year to sit behind Carr and learn about what his strengths and weaknesses are and learning how to cater to them in his own way is huge.

An interesting point to be made is how he would fit into the WFT quarterback room, as well as into their offensive scheme.  The two teams Mariota has played for so far are relatively high rush/smash mouth offenses, which makes sense as Tennessee has Derrick Henry and Las Vegas has Josh Jacobs.  However he seemingly would benefit from a team with a more high-flying intermediate to deep passing game offense.  Even though he does not have to do everything as a QB, his improvising abilities would allow for him to create yards where there are none if the pocket collapses.

Another thing to note is Washington has some fantastic weapons around the QB position right now which fit perfectly with this type of offense.  Terry McLaurin is a YAC machine and has really turned out to be a great WR1 in the league.  Curtis Samuel is another great fit, and should be a good WR2 to work with, Antonio Gibson had a great rookie season and was great at receiving out of the backfield, catching 81.8% of his targets during last season.  Logan Thomas is a great vertical threat for a more redzone and goalline style passing, and can really rip off some yards at times.  Finally Dyami Brown who Washington drafted this year is seemingly the slot receiver for the WFT offense, and his raw speed should make QBs jobs easy as he will separate from DBs quickly.

As I mentioned previously, Marcus Mariota is a backup to Derek Carr right now, and the Raiders also signed back another backup QB of theirs Nathan Peterman, who may not be great but should do the job for now.  With this info in hand, there is a good chance Mariota would only cost Washington at most a 2nd round pick, and realistically a mid-round pick, whether it be 2022 or 2023.  Getting a 27-year-old quarterback who’s biggest need development wise is to just settle down in the pocket and think before throwing is a no brainer for that cheap, especially with their need for the position.

The worst that happens is they have a bridge quarterback for next season, and they can draft one in 2022 to take over after a few weeks.  The best-case scenario is having a potential starter for the foreseeable future who fits into your scheme pretty well, and really can improvise situations to keep your offense alive.  The other reason he may be cheap is who knows when Derek Carr is going to either retire or leave the Raiders, so holding on to a quarterback in the prime years of his career would be a pretty bad idea, considering you can get something more useful in a trade for him like picks.

Mariota does not hold much value right now presumably to the Raiders front office because he has not performed exceptionally well to this point in his career.  He underperformed his early first round price tag in the beginning of his career and is pretty much just a decent backup at this point in time as he likely will not jump Carr for the starting role anytime soon.  However, this would be a great fit for the WFT as their other options for the next season or two are minimal at this position, and a cheap option is worth trying out.