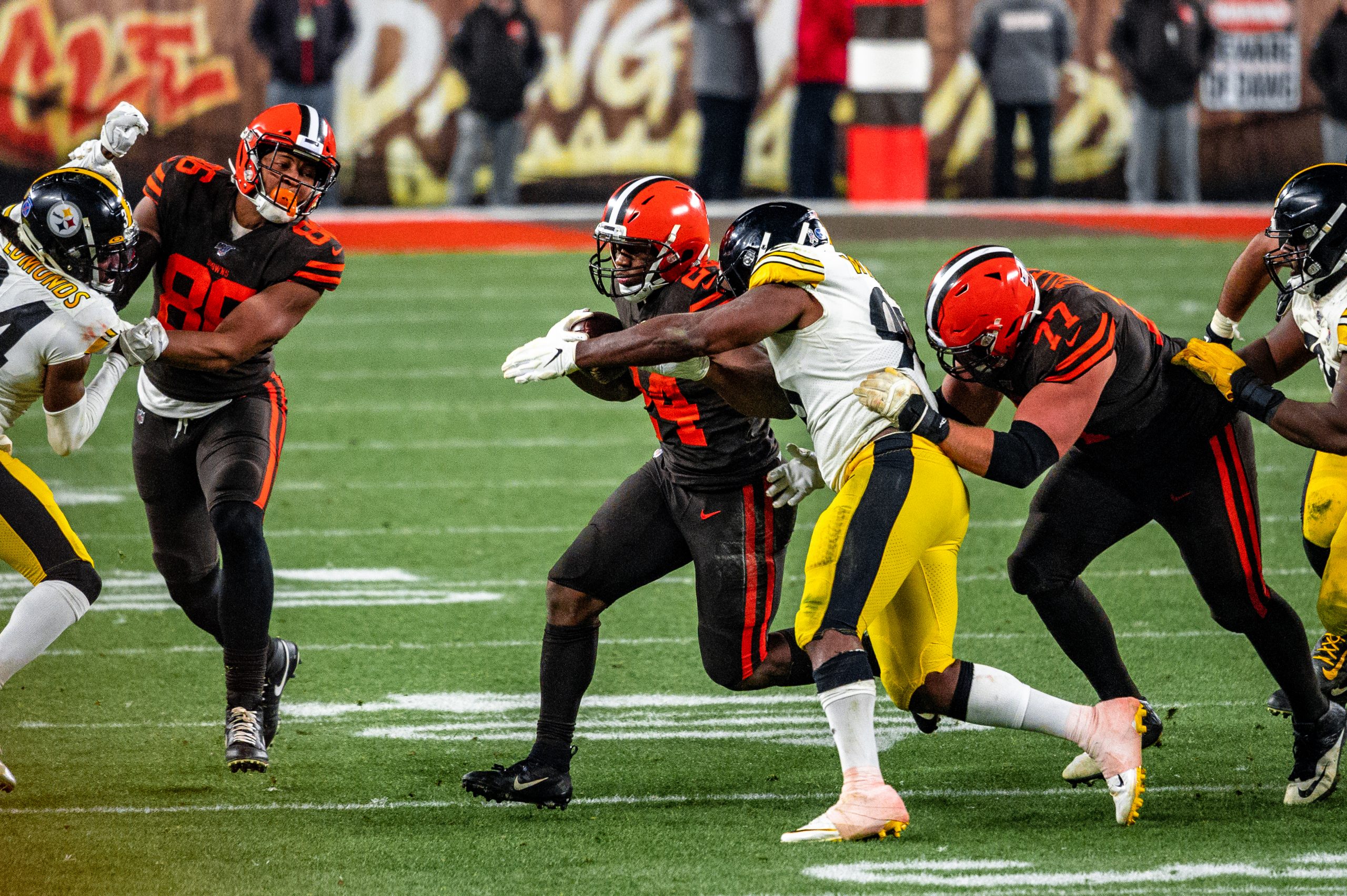 Timing is everything in life. Life tells us this, based on our individual experiences, and when you realize how crucial it is, you do your best to use time to your advantage. So why should it be any different in dynasty football? Dynasty is a timing game as much as anything. Knowing when to buy and when to sell a player is a critical skill similar to playing the stock market. Instead of money, we have players we use as currency. Think back on your best trades, and what do they have in common? They belong in two separate categories. You either sold high on a player before the market collapsed on that player’s value, or you bought low on a player who had not yet reached the upside you saw in that player. Players who are the best at playing the market or zigging while everyone is zagging dominate leagues year in and year out.

Sell Nick Chubb, you say? Have you lost your mind? Now, this has nothing to do with Chubb’s talent. Chubb is one of if not the best running back in the league. Yet Chubb is continually mentioned as someone who possesses that elite upside. My problem is the price you are paying for someone who will not finish as a top-five running back in fantasy. Setting the bar that high for Chubb is setting yourself up for disappointment. Let us look at Nick Chubb’s 2019 season and see why he does not have that elite ceiling in his range of outcomes. Chubb played all 16 games that year and finished top 10 in the following categories:
Snap Share – 7th
Opportunity Share – 8th
Carries – 3rd
Weighted Opportunities – 5th
Red Zone Touches – 5th
Rushing Yards – 2nd
Breakaway Runs – 1st
Evaded Tackles – 2nd
Yards Created – 2nd
Goal-line Carries – 3rd

Now, what does this information tell you? First, I notice that, yes, Nick Chubb is a fantastic running back, but it makes you wonder how someone can finish outside of the top 5 with these numbers. The easy answer is the lack of receiving work. It is the equivalent of inviting Debbie Downer to your birthday party. The music is on point, the food on the grill smells exquisite, the sun is out, and the company is excellent. But, unfortunately, there is still that one person putting a damper on your entire party. That’s what the lack of receiving work is to Nick Chubb. It’s the one missing piece that keeps him from stepping into the genuinely elite fantasy running backs.

In 2020 Nick Chubb had had his best year to date due to his increase in touchdowns. Chubb finished 4th in touchdowns, and in the 12 games he, he played, managed to put up a career-high 17.3 fantasy points per game. Care to guess when the last time that average was good enough to finish in the top five at the running back position? That would be 2012, almost a decade ago. What you need from a running back without receptions is a significant amount of yards and touchdowns. Also known as a Derrick Henry workload, and you would still fall short of the elusive number one running back chair.

I would sell high on Nick Chubb as his value will never be higher in dynasty circles than it currently is this offseason. Add in that Chubb is approaching 26 years old he is reaching the age of the running back age apex (24-26). Do this by pivoting to an elite wide receiver or a younger running back with pass-catching upside plus something on top. You will have to suffer through another top twelve season from Chubb, but your team will be better off long-term in dynasty. There is also one person in your league that loves Chubb. See if you can come close to this deal I pulled off last October.

What did the Bengals do to help Mixon this offseason? They drafted one of the best receiver prospects of the last decade in Ja’Marr Chase. This year Burrow is throwing to Chase, Higgins, and Boyd, yet somehow, Mixon is supposed to have an increased role in passing? That will not help Mixon’s target share or make him or a more efficient fantasy back. We have seen this player given a significant role for fantasy production yet, Mixon has continued to disappoint fantasy managers. 2021 is the last season Mixon is a borderline elite fantasy running back in dynasty circles, currently the lowest ADP for Mixon in his career as his rookie year he was RB12. When Mixon fails again, he takes a significant hit in dynasty circles.

On DLF, here are a few of the deals involving Mixon in June:
Mixon for Stephon Diggs
Mixon for Allen Robinson and a 22 1st
Mixon for Elliot and 22 2nd
Mixon for Ekeler, Jakob Harris, and 22 2nd
I’m #SmashAccepting every one of those deals for Mixon. Now is the perfect time to move on from Mixon as the hype builds around the Cincinnati offense. If you cannot get proper value, wait until a spike week during the season and move him.

I could continue, but you get my drift. The community valued Robinson as a valuable piece when the NFL did not. I would have the same plan for Gaskin as I do Joe Mixon, try to move as we get closer to the season, if unable move Gaskin after a hot start. (I say this as someone who has Gaskin on one of my dynasty rosters.) Are you willing to make that same mistake that burned so many managers this offseason? I, for one, am not. It may take until a team needs a running back for a title push, but someone will offer you a deal to acquire the lead back of the Dolphins the season. Be ready to strike when that moment arrives.

Gibson is one of the best athletes at the running back position in the NFL, which is a significant indicator of future NFL success. Gibson is a former wide receiver who converted to a full-time running back in his first year in the NFL. The upside is tantalizing with this player, and among the top twelve dynasty runningbacks, Gibson is the least expensive with the most considerable upside. If you are wondering what that upside is, it is the potential RB1 in dynasty.

If only a player with the size and skillset came around every year. Gibson is not higher because we are unsure how Washington will deploy Gibson moving forward as he only saw 44 targets to 110 for J.D. Mckissic, another former college wide-receiver. The issue is pass protection for Gibson as he was only allowed 18 pass-blocking opportunities compared to Mckissic’s 65. If a running back cannot protect in passing downs, they will not play. The quarterback is too valuable to a team to have someone miss blocking and give defenders a free runway to the quarterback. If Gibson improves in this area, he will see a massive jump in his snap share and opportunity this year. He ranked 39th with a 45.4% snap share as a rookie. Buy this player now while there are still concerns and his price is reasonable. It may be the last chance you get in dynasty for the next few years.

It’s odd to see a rookie with first-round draft capital have so many concerns without ever stepping onto the field. These are not character-related concerns either, in fact, due to the coaching staff and his teammate in the backfield, Mr. James Robinson.
Let’s dig into concerns about the coaching staff. First, reports of the Jaguars being crushed, Kadarius Toney was drafted ahead of them in the first round. Then, the Jaguars pivoted to Travis Etienne, Trevor Lawerence’s running mate at Clemson. To follow that up, The Jaguars reported using Etienne in a receiver role early this offseason, and dynasty managers pulled the panic button that he would see the field in a position similar to how Urban used Percy Harvin or Curtis Samuel in college. Don’t get me started on how ridiculous that speculation is.

The echo chamber of Twitter began questioning if a prospect with this pedigree was worth an early first-round rookie pick due to the situation. A rebuilding team, which the Jags are, would not use high draft capital on a running back unless they believed that player was a significant upgrade at the position. So let other managers sweat while you send offers to acquire this player and enjoy the PPR success this player will provide to your team. While the Jaguars will not win many games in 2021, the offense will be a fun group that brings back the entire offensive line. With skill players such as Shenault, Chark, and Marvin Jones on the outside, it will be a fun team to watch that should produce plenty of fantasy points. Etienne has a shot to finish as a backend RB1 or a high-end RB2 due to that receiving role he is taking over. At this time next year, you will have to pay significantly more capital to acquire this player. Get out ahead of the market on this player.

The last player on the list may be the most intriguing, given that Dillon costs the least. Aaron Rodgers playing offseason chicken with management puts the entire future of the offense in question. If Green Bay moves on from Rodgers and starts Jordan Love, it will tank every single skill player’s value the Packers currently have. The price of Adams, Jones, Tonyan would significantly fall, whereas Dillon is a younger player now devalued by his backup role. It would not be as steep a fall for him in dynasty circles, making him a much safer investment of the current players on the roster.

If Rodgers does play (which seems the most likely scenario), Dillon has weekly flex scoring upside for this season and beyond, being Robin to Aaron Jones Batman role in the offense. It also helps that it is one of the truly elite offenses in the NFL. Jones has never received a heavy workload or snap share in his time with Green Bay. Ranking no higher than 15th in either category the last two seasons. What makes Jones an elite fantasy option is his efficiency in that offense scoring 30 touchdowns the previous two seasons combined. With Jamaal Williams leaving for Detroit in free agency, Dillon can play a significant role in Green Bay.

I will happily take a flier on a 23-year-old 250 pound running back with elite speed and burst. The payoff is well worth the price, which we will see his value take a significant leap forward. Don’t be the team wishing you had invested in his price when it was at its dynasty floor.

Why the 49ers make a lot of sense for Davante Adams
Projecting Tom Brady’s ceiling and floor for 2021
wpDiscuz
0
0
Would love your thoughts, please comment.x
()
x
| Reply