Why the Ravens will climb in 2021 under Lamar Jackson 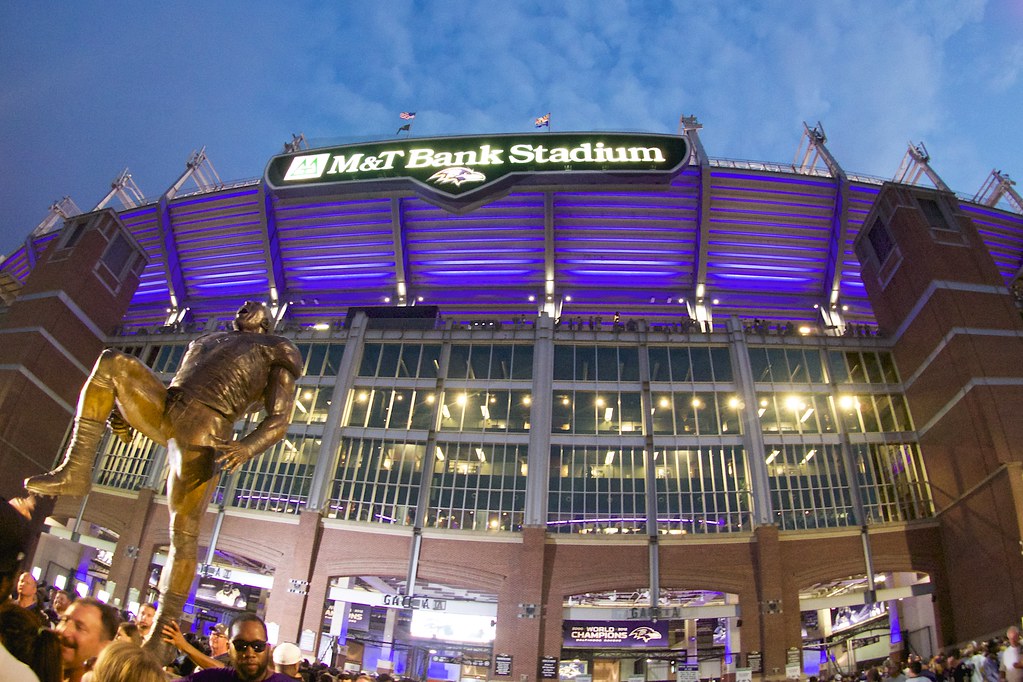 The Baltimore Ravens offense will aim for an AFC North title

Despite the offseason additions, no one appears to have the Ravens in their list of Super Bowl contenders. This is a stark contrast to twelve months ago, where everyone had them playing the Chiefs in the AFC Championship. This is partly due to increasing concerns over the arm talent of Jackson and whether it is good enough to take the Ravens to a Super Bowl.

Jackson v Mahomes was seen as the next Manning vs Brady, but instead Jackson is yet to beat Mahomes in three outings. Can Lamar Jackson and the Ravens bounce back in 2021?

Jackson is often criticized for lacking the same arm talent of the likes of Patrick Mahomes, Josh Allen and Aaron Rodgers but he sure can run. He has a 30-7 record as a starter and was an MVP for a reason.

Lamar initially started his professional career as a backup to Joe Flacco, who had been such an instrumental figure in recent Baltimore history. He won Super Bowl 47 MVP after the Ravens’ 2012 season saw them lift their second ever Lombardi Trophy. In similar fashion to Eli Manning at the New York Giants, it is not easy to say goodbye to figures that have bought you success in the past. On 18th November 2018, Lamar earned his first start, in a 24-21 win against the Cincinnati Bengals.

He may not have thrown for a touchdown pass in the game but it was the start of the Lamar Jackson era in Baltimore. He finished the 2018 season with 1,201 passing yards and 6 touchdowns thrown for.  He also recorded 695 rushing yards and ran for 5 touchdowns. Their season was ended by the Los Angeles Chargers in the Wildcard Round.

When the Ravens took Jackson 32nd overall in 2018, Jackson said that they were going to get a Super Bowl out of him. This could have easily been construed as an over confident comment. However, he backed this up with a sensational season, which won him the MVP award. Jackson threw for 3,127 passing yards in the regular season along with 36 passing touchdowns. He also ran for 1,206 rushing yards and 7 rushing touchdowns in 2019. Additionally, he was responsible for breaking various NFL records as he had a season for the ages.

2019 saw Lamar break Michael Vick’s 2006 record for rushing yards recorded by a quarterback in a single season, with his total of 1,206 beating the 1,039 recorded by the former Atlanta Falcon and Philadelphia Eagle. Jackson had more rushing yards than the whole Miami Dolphins and New York Jets offenses. He had as many rushing touchdowns as the Pittsburgh Steelers and Detroit Lions, with his seven TD’s more than the Jets (5) or Jacksonville Jaguars (3) managed all year.

Jackson is the only quarterback to amass over 3,000 passing yards and 1,000 rushing yards in any single-season and is the only player in NFL history in his position to record over 1,000 rushing yards whilst also passing for 30 touchdowns or more. Along with Aaron Rodgers in 2011, Jackson’s 9% in 2019 is only topped by Peyton Manning (9.9%) for any single-season touchdown rate. Jackson (9) broke the record set by Vick (6) in 2004 for consecutive games with 60 rushing yards or more and Jackson stands as the quarterback with the most ever fantasy points (417.7). He posted a perfect passer rating (158.3) on two occasions, something only Steelers quarterback Ben Roethlisberger has previously achieved. He also had a quarterback rating of 100 or more in nine games.

No quarterback has recorded more rushing attempts than Jackson in 2019 (176), with only 22 players in the entire league recording more than Lamar that season. This shows the faith Baltimore and head coach John Harbaugh have in Jackson using his feet.

The Baltimore Ravens went 14-2 during the 2019 season, with those two defeats coming in weeks 3 and 4. They won their next twelve games, earning themselves the number one seed in the AFC and a playoff bye, with many expecting them to go to and battle it out with the Kansas City Chiefs for a place in Super Bowl 54. Quarterback Lamar Jackson would later earn an MVP award but the Ravens suffered a shock defeat to the Tennessee Titans in the Divisional Round, losing 28-12 at the M&T Bank Stadium.

Despite the surprise defeat, many predicted Baltimore to challenge once again during the 2020 season. Their week 3 matchup against the Chiefs was seen as the preview to the AFC Championship. However, the Ravens were outplayed in the 34-20 defeat and Jackson openly referred to the Chiefs as his kryptonite. The Ravens would go on to win their next three games before only winning one of their next five games, with their playoff hopes in serious jeopardy. They won their final five games, albeit only one of those wins coming against teams with winning records. This included a thrilling 47-42 win over AFC North rivals the Cleveland Browns.

Baltimore got revenge on the Titans in the Wildcard Round but the Buffalo Bills would eliminate the Ravens out of the playoffs in the Divisional Round. He may have finally ended the tag that he couldn’t win a playoff game but there still remains doubt over his arm.

One factor that was often used in support of Lamar was the lack of talent to throw to. Marquise ‘Hollywood’ Brown had an encouraging rookie season in 2019 but struggled for large parts of the 2020 season.

Ravens have addressed the wide receiver issue, with the acquisition of Sammy Watkins via the Chiefs in Free Agency. He spent three seasons in Kansas City, where he won Super Bowl 54. He is reunited with Greg Roman, who was his offensive coordinator when he played for the Bills. Watkins had his best season in terms of yardage whilst with the Bills and alongside Roman. He also recorded two of his three best touchdown scoring seasons during his time in Buffalo. His 2015 sophomore season saw him record more touchdowns than his three seasons with the Chiefs combined.

Baltimore have also drafted help for Jackson, with the addition of two wide outs within the first four rounds of the 2021 draft. Minnesota wide receiver Rashod Bateman was taken with the 27th overall pick before selecting Oklahoma State receiver Tylan Wallace with the 131st overall pick.

Wallace spent four seasons in college and had impressive numbers, particularly his second campaign. 2017 saw a limited role, with just seven receptions recorded. In 2018, Wallace manage to tally up 1,491 receiving yards, 12 touchdowns and 86 receptions at a rate of 17.3 yards per reception and a touchdown every 7.2 receptions. Wallace also recorded 903 yards and 8 touchdowns in 2019 and despite the pandemic, Wallace scored 6 touchdowns and tallied up 922 yards in 2020.

With Brown, Rashod Bateman and Tylan Wallace to throw to along with tight end Mark Andrews, Lamar has plenty of talent to work with.

Will The Loss Of Orlando Brown Prove Pivotal?

In April this year, the Chiefs traded for Ravens offensive tackle Orlando Brown Jr. The Chiefs gave Baltimore their first, third and fourth from this year’s draft along with a fifth round pick from 2022. This was in exchange for Brown and the Ravens’ second rounder from this year along with a sixth-round selection in 2022. Many felt that this would impact the Ravens going into the upcoming season.

Lamar Jackson was the thirteenth most sacked quarterback in 2020 and the Ravens have gone out and beefed up their offensive line this offseason despite the loss of Brown. Former New York Giants guard Kevin Zietler has joined the franchise in Free Agency along with guard Michael Schofield and offensive tackles Alejandro Villanueva and Ja’Wuan James.

Brown will be a hard act to follow, but Baltimore have certainly replaced him along with adding depth to their offensive line. This will help them when it comes to divisional games.

Can The Ravens Claim Back The North?

Speaking of divisional games, the Ravens are in one of the NFL’s toughest divisions. The Steelers won the AFC North in the 2020 season, starting 11-0 before only winning one of their final five games. They were embarrassed by the Cleveland Browns in the Wildcard Round, starting the second quarter 28-0 down. The loss of linebacker Bud Dupree to injury coincided with the end of their unbeaten run and the struggles down the stretch. He left the Steelers in Free Agency, as did cornerback Mike Hilton, running back James Conner and Villanueva. Wide receiver Juju Smith-Schuster has struggled to make the jump from a number two to a number one receiver, with his TikTok dances causing nothing but a negative impact.

Last season saw the long wait for a Cleveland Browns playoff appearance and playoff win come to an end as the Browns made it all the way to the Divisional Round where they came ever so close to reaching the AFC Championship, narrowly losing to the Chiefs. The Browns have continued their momentum with an excellent offseason. They added safety John Johnson and defensive end Jadeveon Clowney in Free Agency, the latter who is a great player when he decides to turn it on. They have also added linebacker Jeremiah Owusu-Koramoah, who is seen as one of the top prospects of the draft in his position. These players will join a franchise with a roster already filled with a plethora of talent.

Quarterback Baker Mayfield had a resurgent season in 2020 and has Jarvis Landry to throw to along with Odell Beckham, who saw his season cut short thanks to injury. It is safe to say Beckham’s time in Cleveland has not gone to plan so far, with his relationship with Baker on the field yet to develop. On his day, he can be an excellent receiver and the Browns need to find a way to make it work. There is also the best running back duo in Nick Chubb and Kareem Hunt. All of these offensive weapons have a great offensive line ahead of them, with Jedrick Wills, Joel Bitonio, JC Tretter, Wyatt Teller and Jack Conklin. Defensively, Clowney will line up in the defensive line alongside one of the league’s best in Myles Garrett.

The Cincinnati Bengals have an encouraging quarterback in Joe Burrow who will be reunited with his college teammate Ja’Marr Chase, who was seen as the top receiver in the draft. However, they are too early in their rebuild to aim for the AFC North but can beat any of their division rivals on their day. They can have an impact on the overall division standings, even if they won’t be the ones benefiting.

Baltimore has a tough task in winning the division, as do all four teams in the AFC North. The Ravens defense is excellent and will take them far. Calais Campbell, Patrick Queen and Marlon Humphrey all make the Ravens a threat on that side of the ball. If they are to win the division, they need Jackson back to his 2019 form, with the addition of the receivers and offensive lineman likely to play a big part in Lamar’s success throwing the ball.

Daniel Jones is the Giants long term QB
How the Jacksonville Jaguars Can Win the AFC South
wpDiscuz
0
0
Would love your thoughts, please comment.x
()
x
| Reply