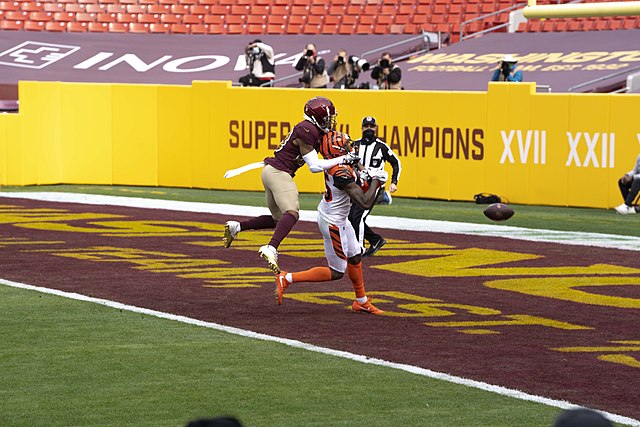 The Cincinnati Bengals have a gifted wide receiver in Ja’Marr Chase, who unveiled 1,455 receiving yards as a rookie (second-most receiving yds in a rookie season of all time). Per NFL.com, Chase stated, “Now I’ve got all the small details down, like learning how to set people up before the next route. And I feel more comfortable with the offense. Maybe I can move around a little more when we see different things on film. I feel like all of that’s going to make me a lot better this year”.

Chase will certainly benefit from his team upgrading their offensive line – as Burrow will have more time to hit him for big plays in key moments.

The Bengals second-year wideout will certainly look to climb the ladder and show that he is more potent than the likes of Justin Jefferson, Ceedee Lamb, and even Cooper Kupp. Perhaps Chase will oust his first All-Pro season in 2022 that could have similar magic to Randy Moss’s 2003 (1,632 yds and 17 TDs) or 2007 season (1,493 yds and 23 TDs).

Tee Higgins may not be the most popular wideout in the Bengals building, but he is capable of being the best WR2 in the NFL. Per NFL.com, Higgins had the best CROE (catch rate over expected) in the entire NFL last season. If the 23-year-old Higgins takes a positive step in his third season and Chase continues to improve as the football world expects – the Bengals WR duo may really be the best receiving pair in the NFL by the end of 2022.

After the two most attractive WR faces on the Bengals, the Bengals have a sharp WR3 in Tyler Boyd. Boyd nicely has 800+ receiving yards in each of his past four seasons. Boyd is quite the reliable WR3 and he will still be under contract with the team until 2024. It’s clear that Joe Burrow could be an MVP candidate within a couple of seasons, as he grows with his big three WR toys and a noticeably more talented OL.