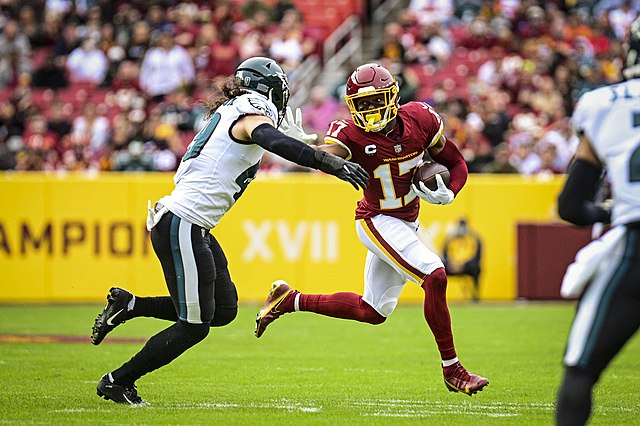 Why Nick Sirianni could really win coach of the year

The Philadelphia Eagles have started off the season hot going 3-0 and being the only team in the conference that is currently undefeated.  This has largely been the product of a few different factors, including a revamped roster via way of Howie Roseman, Jalen Hurts developing exceptionally well, and some all-around great coaching by 2nd-year head coach Nick Sirianni.  In this article, I will be covering 3 reasons why Sirianni could win coach of the year this season, and why I believe he is in the top 3 to be nominated for the award at this moment.  So without further ado, let us start with the first reason.

One of the main benefits for the Philadelphia Eagles this season would be their strength of schedule, as they are tied for playing the least amount of 2021 playoff teams this season at only 6.  According to Sharp Football Analysis, the Eagles have the 2nd easiest strength of schedule, only more difficult than the Giants’ schedule.  Why does this play a role in how Nick Sirianni can win coach of the year?

The reason this has such a huge impact is that despite teams improving over the offseason, the odds that the bad teams remain bad are pretty high.  This should allow the Eagles to make a pretty easy playoff push, with a 93% chance of making the playoffs according to FiveThirtyEight (see tweet below).

A coach taking a team that was 4-11 the year before he came into the head coaching position to 9-8 last season, and 3-0 already this year, is a drastic improvement in only two seasons.  With such a seemingly weak schedule as well, if the Eagles can take a top seeding, this should all but guarantee Sirianni the coach of the year honors.

Drastic production increases on both sides of the ball

A very interesting statistic to monitor for NFL teams is points for/points against, as well as points differential, which is notable for offensive and defensive production, and how much one may outweigh the other.  The Eagles are on track for 487 points this season, which would be their highest total in team history, the next closest being 474 in 2014.  As for points against, they have only allowed 50 so far, which would mean they are on pace to allow approximately 283 points this season, the lowest total since 2004 in which they went 13-3 and made it to the Super Bowl.  If you take the points differential for these stats, it would be 191 in favor of the Eagles, meaning they outscored all opponents on the season by 191 points.  This would be their highest total since 1949 in which they won the Championship, and 1948 respectively in which they also won the Championship (both pre-Super Bowl era).

Now granted, the likelihood of the Eagles keeping this up all season is pretty slim.  But the fact that they had a -84 points differential prior to Sirianni joining, and then immediately went to +59 and now are on track to set records for points differential on their team is immensely impressive.  It goes to show how much impact good roster development and coaching have on a team.

Let’s just take a look at the players Sirianni has developed in the last two years to be high-tier draft talents or better than they were before:

While Sirianni has not necessarily been the best developmental coach of all time or anything, he has done well to turn the prospects he has into functional contributors to the team.  This is key with any new head coach who is taking the spot after previously being a coordinator, as it shows they not only know how to call plays for their side of the ball, but also know how to develop talent, and work other parts of the team.