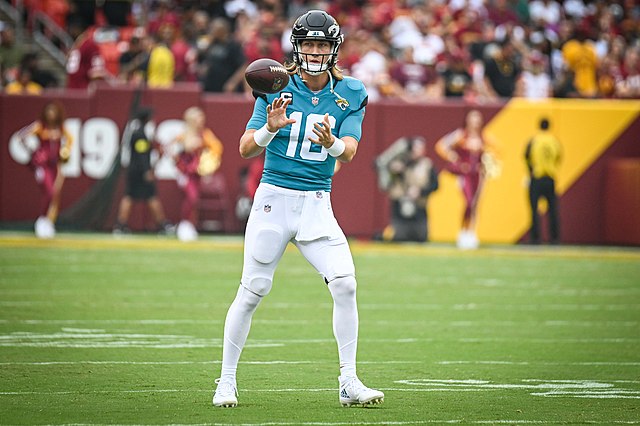 Why the Jaguars can still make the playoffs in 2022

The Jacksonville Jaguars are seeking to return to their old ways of dominance (which was last shown in sacksonville). They have shown improvement from their 2021 version (3-14) in 2022. The former Eagles Super Bowl-winning HC Doug Pederson has lifted the Jags offense from the ashes and jolted Trevor Lawrence’s all-around ability (as T-Lawrence has thrown 1,232 passing yards, 8 passing touchdowns, and 4 interceptions thus far). The sophomore RB Travis Etienne has also been effective alongside James Robinson up to this point (by way of obtaining 339 all-purpose yards).

The Jags haven’t only witnessed growth and production from their young QB-RB duo, but they’ve also been competitive in each contest this season. They lost in Week 1 by a score of 28-22 against the Washington Commanders, but they bounced back and dismantled the Indianapolis Colts by a score of 24-0 in Week 2. They had the most surprising Week 3 victory against the Jacksonville Jaguars with a score of 38-10. They weren’t able to beat the Philadelphia Eagles (aka the last undefeated NFL squad) in Week 4 — as they lost 29-21. I’m confident that I’m not the only NFL die-hard to acknowledge that the Jags had a surprising effort against Philly. Unfortunately, the Jags had a shocking loss against the Houston Texans in their latest battle.

I still feel the utmost confidence in the Jaguars’s direction and chances of reaching the postseason in 2022. The Jags will reap growth from Lawrence (despite his worst game on the season in Week 5), Etienne, and their first overall pick in 2022, Travon Walker.

Their schedule in 2022-2023 is quite tasty, as well. The Jags battle the New York Giants, the Denver Broncos, the Las Vegas Raiders, the Kansas City Chiefs, the Baltimore Ravens, the Detroit Lions, the Tennessee Titans, the Dallas Cowboys, the New York Jets, the Houston Texans, and the Tennessee Titans. I feel that the Jags can edge out the Broncos, Raiders, Lions, Titans each time, Jets, and then not be swept by the Texans.

It may not be sunshine and rainbows for the Jags, but they have certainly taken monster steps from last season. I foresee the team led out by the scrappy HC and motivated QB to continue to improve, defeat the mediocre competition, & punch their ticket to the postseason for the first time since 2017.