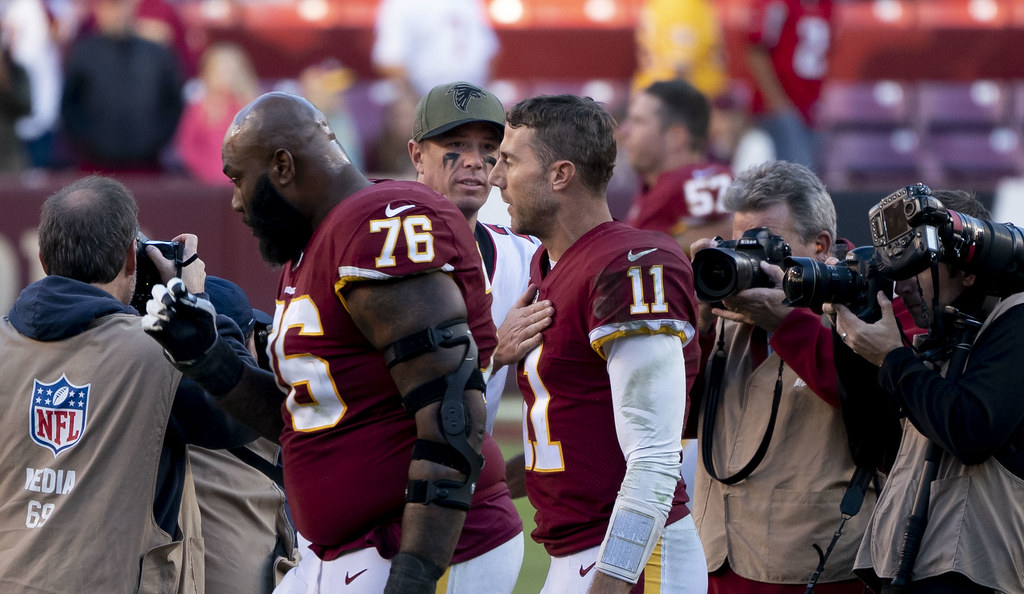 What is the best landing spot for Taylor Heinicke?

Taylor Heinicke’s performance in the Wild Card game this past Saturday against the Tampa Bay Buccaneers was electric even though the Washington football team did not come up with the win.

Taylor showed a lot of promise throwing for 306 yards, 1 touchdown, and 1 interception with 26 completions on 44 attempts. Heinicke also ran for a spectacular touchdown on a 3rd and 5 play in the 3rd quarter after the pocket collapsed rather quickly. Lunging from the 4-yard line, Taylor laid out for this rushing touchdown by knocking into the pylon with the football.

Taylor Heinicke received the approval of his teammates during and after the game. After the game, speedy wide receiver Terry McLaurin stated, “I’ll take No. 4 on my team any day of the week, twice on Sunday. I hope we’re teammates in the future. That dude plays with no fear. He’s going to give his players a chance to make plays. He extends plays, he runs, he takes hits. He does everything you ask a quarterback to do in this league. He gave us a chance.”

Six years later Heinicke returned to finish his college degree. The Washington football team gave him a call and moved him to their practice squad on December 8th for emergency purposes. He was soon moved up to the active roster and was told on Friday, January 8th, 2021 that he would be starting in the Wild Card game the very next day.

Heinicke then found his way onto the Minnesota Vikings roster as an undrafted free agent in 2015. He also found his way on the rosters of the Patriots and Texans in 2017, followed by the Carolina Panthers in 2018. He most recently was the backup QB for the St. Louis BattleHawks in 2020. Taylor Heinicke hasn’t been in the NFL for two years so when he saw his opportunity to play in a NFL Wild Card game he did not take it lightly. He even put his college finals on hold in order to play in the game.

So where could Taylor Heinicke play football in the National Football League? Well, it would be ideal for him to be a part of a spread scheme offense, which is the type of offense he excelled with behind Brian Scott at Old Dominion University.

The spread offense usually has the quarterback in shotgun formation with four or more receivers in order to “spread” out the defense. Now, Heinicke has shown he can be a passer as well as a runner so he could fit into a few other schemes as well. There is no shortage of NFL teams in need of a QB, some teams with the primary need of a quarterback are: 49ers, Broncos, Colts, Cowboys, Falcons, Jaguars, Jets, Lions, Patriots, Saints, and of course the Washington football team.

With the Jaguars and Jets both looking to draft a Quarterback with their high overall draft picks, we can rule those two teams out of the conversation.

The 49ers struggled to be healthy all year long in many areas, but especially at the quarterback position. Jimmy Garoppolo has struggled with two high ankle sprains for most of the 2020 season.

It obviously wouldn’t hurt to get Taylor Heinicke in the lineup as another option behind injury-prone Jimmy Garoppolo.

Next, it is no secret the New England Patriots are having trouble filling Tom Brady’s shoes. We aren’t sure if Cam Newton will still be with the Patriots next season because he was only signed to a 1 year deal.

Are the Patriots going to draft a quarterback in the upcoming draft? Most likely they will with the deep quarterback class entering the NFL draft this year, but it sure wouldn’t hurt having a backup QB like Taylor Heinicke on the roster.

Backup QB Jarett Stidham received plenty of playing time this season with Cam Newton’s inconsistency, but Stidham did not perform any better. Heinicke is a great option for Bill Belichick even if the team decides to keep Cam Newton.

With Kyle Allen dislocating his ankle in week 9, Alex Smith was able to extend his comeback story and start in the NFL once again. However, Alex Smith also had a calf injury limiting him from playing in the Wild Card game.

The Washington football team now has multiple injury-prone quarterbacks on the roster, why not allow Heinicke to stay with the team? The rest of the team sure seems to support the idea of keeping Taylor Heinicke in the lineup, therefore I do as well.

The guy showed a lot of heart in the NFL Wild Card game this past weekend, many would say the heart is exactly what Washington needs. Who knows maybe next season this could be Taylor Heinicke’s team.