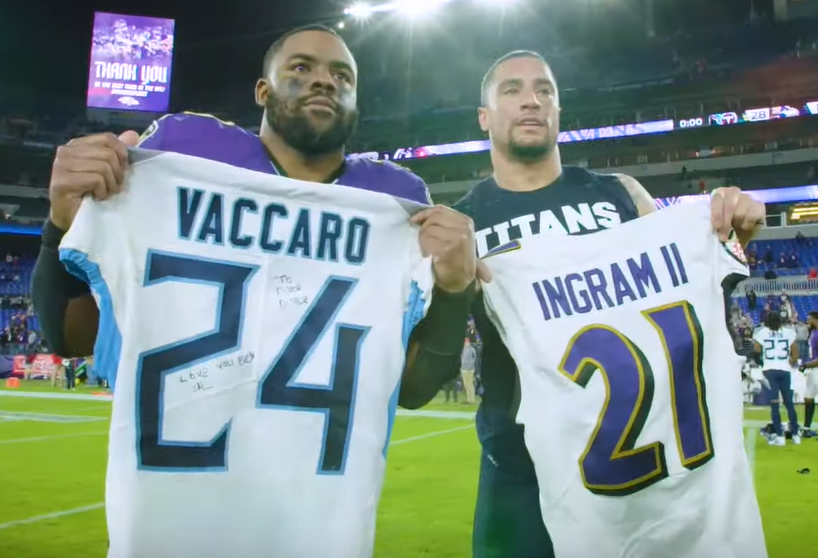 "File:Ingram and Vaccaro.png" by Tennessee Titans is licensed under CC BY 3.0

What are the best landing spots for Mark Ingram?

More than any other team sport, the NFL is the most slippery of slopes in regard to job stability of its players. You could be a pure roster depth stash or a street free agent one week and find yourself starting at Wide Receiver (WR) next weekend (Greg Ward, Miles Austin, Wes Welker, Rod Smith are all erstwhile examples); on the flip side, you could go from being a stud Running Back (RB) to being on the unemployment line next season — Mark Ingram being the latest example.

A Pro Bowl RB in 2019, and one-part of the fearsome backfield-duo of Ingram-and-Kamara for the New Orleans Saints from 2017-2019, Mark Ingram signed a multi-year contract with the Baltimore Ravens in 2019. His first year with Ravens was better than expected — more than 1250 scrimmage yards and 15 TDs was in-line with a top-tier RB caliber performance. However, prior to the 2020 season, the Ravens signed exciting rookie JK Dobbins to be their neo-version of Ray Rice. Dobbins was every bit as exciting as they envisioned, and over the course of the season, Baltimore steadily moved away from Ingram; to the point, where the veteran was a healthy inactive the past few weeks, including in the playoffs. After their loss to Buffalo last week, the team sealed Ingram’s future as a Raven by cutting him.

So where does Ingram go from here? My piece today looks at three teams that will be in the reckoning to sign and effectively use the veteran RB. Although the league has gravitated more and more towards a pass-oriented offense, good RBs are always in demand. Ingram most certainly qualifies as a “quality back” that teams desire; here are three of them who come foremost in mind as the front-runner for his services.

The Chicago Bears were the prototypical good-bad team — a bad team that wins against worse teams to become a good enough team to make the playoffs. Their playoff run should not, therefore, divert their think-tank from the reality that the team needs a serious overhaul in its skill positions, especially on offense.

In the backfield, David Montgomery was a late-season lifesaver, consistently carrying the load for positive results. However, the fact is that he is NOT an elite runner — he gets what is available. His partner in the Bears backfield, Tarik Cohen, was lost due to a torn ACL, and his return (particularly, in full form) is debatable next season.

Ingram will fit in nicely for the Bears on two fronts. One, he will be the perfect complement to D-Mont as a yards-churner, and to spell him on some possessions. Second, he can be a mentor to Montgomery, as well as the younger, unrefined bench crew of Artavis Pierce and Ryan Nall.

In fact, one of the themes of Ingram’s stay in New Orleans and Baltimore was his positive influence on younger players, such as Kamara, Dobbins, and Gus Edwards.

Todd Gurley was a huge bust in 2020. The uber-stud from two years ago labored for 195 carries to amass 678 yards in a disappointing campaign for the Falcons. Given that he was signed on a one-year deal, he is as good as gone in 2021.

Under a new coaching staff, the Falcons will look to retool their offensive skill personnel, especially in the backfield. A key requirement in a Matt Ryan-led offense is for the RB to catch the ball — as is evident in the glory years of Devonta Freeman and Tevin Coleman. And Mark Ingram fits the bill perfectly in this regard.

As good a rusher that he was, Ingram’s value as a pass-catcher out of the backfield was under-rated purely because his counterpart was the super-freak Alvin Kamara. He is solid at the underneath and wheel routes and will be of tremendous use as a safety valve to take the pressure off Ryan, as well as a third option in the passing attack behind All-Pros Calvin Ridley and Julio Jones. If Ingrams signs with the Falcons, a return to his 2017 form should not be a huge shock.

Robert Saleh, the Jets’ newly appointed Head Coach, had this to offer as his team’s mantra for the future – “all gas, no brake.” His prior team, the San Francisco 49ers, emphasized multiple RB-sets and creative play-calling from the backfield; these are aspects that Saleh will be sure to bring to fore for the 2021 Jets.

In terms of existing personnel, it is all but obvious that Frank Gore’s stay as a NY Jet is done, and other backs like Ty Johnson and Josh Adams are journeymen.

LaMichael Perine will be the one stayover from 2020, and while he showed promise as a rookie, he lacks breakaway speed, and his elusiveness is fair, not elite. At best, he can be a solid part of a committee. This leaves the door open for a true-and-tested back with documented success, and that is exactly what Mark Ingram offers.

Ingram is also the type of back that thrives on extended opportunity — the more carries he gets in a game, the better he gets (kind of, like a poor man’s Derrick Henry). For the Jets to stay in games next season, they will, therefore, need sustained drives. And to do so, they will need to emphasize the run a lot more; all of which portend a move to bring in someone of Ingram’s stature.