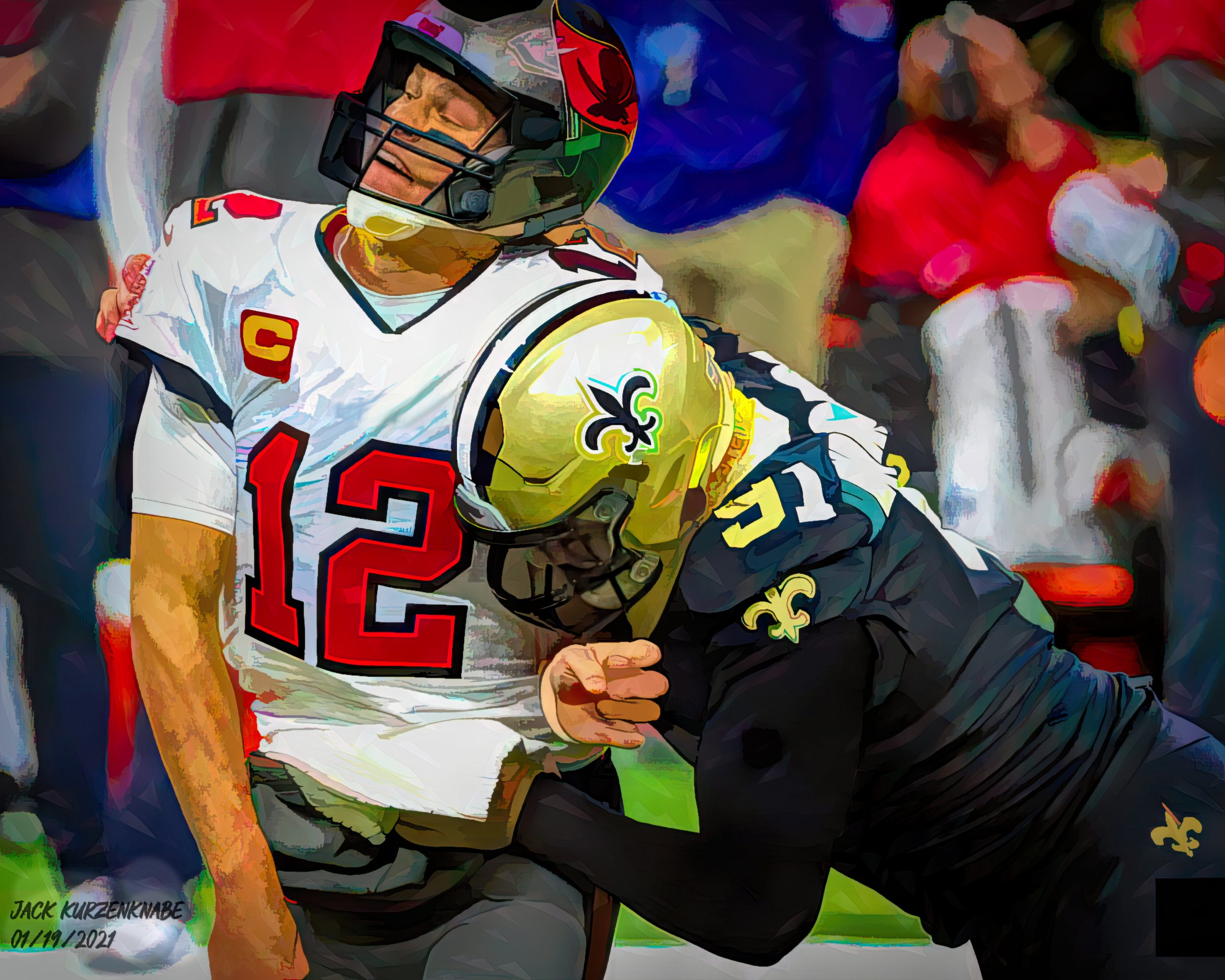 With the 2021 offseason only a few weeks away, and many players being off of long-term contracts, this is the prime time to start talking about where free agents should go.

The best team to start with in this is the New Orleans Saints, as they have very minimal cap room to re-sign their free agents.  With this, there is a good chance at least 2-3 of their major players could slip away into free agency and wind up on another team come training camp time.

The most interesting of these players will likely end up being defensive end Trey Hendrickson.  Hendrickson has had a career year this season, putting up 13.5 sacks (Tied for 2nd most in the league), and tied for 15th in QB pressures (32).

With these notions in mind, he will be a very valuable player for teams to look into during the free agency period.  Here are the five teams that would be the best fits for him if they were to sign him this offseason.

The Patriots come up in almost every single one of these for a reason, and it is because they have the cap space to bring in nearly anyone they desire.  They are currently projected to have around $57.3 million in cap room entering 2021 free agency, and that is before they move any players.  One of the main positions of need for their team is edge rushers.  The Patriots defensive rushing stats looked like this:

The Patriots secondary has carried the defensive load of the team for quite awhile now, with players like Stephon Gilmore, J.C. Jackson, Devin and Jason McCourty, as well as others.

The return of Dont’a Hightower at linebacker will help slightly with getting pressure onto opposing quarterbacks for sure.  However, adding a young talented edge rusher like Hendrickson to their front 4 would do wonders.

Since the Patriots run a 3-4 defense and run the Fairbanks-Bullough system (which I will explain in a second), Hendrickson’s versatility to shed lineman would come hugely into play within that system.  He would definitely have to conform to the 3-4, rather than the Saints 4-3, as he would have to take on more than just an offensive tackle on either end.

This is what the Fairbanks-Bullough system entails.  They have 3 defensive linemen on the field, and each is responsible for the gaps created to the left, and right, of the lineman they are up against.  Here is a diagram of this system:

Overall, this would be a big system switch for Trey, as he would have a much larger role in this version.  However, as a younger player, he definitely has the adaptability to change his style a bit.

For those wondering if Hendrickson was part of a 3-4 defense in college, he was not.  FAU (Florida Atlantic University) is where Hendrickson played college ball, and he was part of a 4-3 defense there as well.  This is why his transition to the NFL and to the Saints defense was relatively seamless, minus some minor corrections.

If there was a better scheme fit for Hendrickson outside the Saints, it is the Seahawks.  While the Seahawks defense is not as good as the Saints most times, it is an extremely similar style of defense.

Their defensive coordinator Ken Norton Jr. is a former NFL player, and was the only NFL player to this day to win 3 back-to-back Super Bowls.  He is a fantastic defensive coach, he just does not have much to work with at this time.

If memory serves me correctly, the Seahawks also run a little bit of Nickel formation now as well due to the NFL evolving into a pass heavy league.

Something to note however regarding the Seahawks in this situation is they are pretty low on cap room.  They are projected to start the offseason with about $2 million, however they could clear a bunch of that by moving pieces around.

The Seahawks do not really have much of a defensive edge currently that can break through the offensive line at will.  The addition of Carlos Dunlap in a late season trade with the Cincinnati Bengals could change that statement, however.

Dunlap performed well to round out the season, so having Hendrickson on the outside opposite of Carlos would be even more lethal for the front 4 linemen.  They will have to clear quite a bit of cap space to bring in Hendrickson however, so this is probably not the most likely destination.  However, it would be the best scheme fit at the end of the day.

The Jaguars may be the best suited team on this list in terms of having the most qualifications across the board.  They have a large amount of cap room.  They have other young pieces to go around him (K’Lavon Chaisson, Myles Jack, Dawuane Smoot, etc.).  They also run a 4-3 for a large majority of the time and are very good at doing so.

The 2017 Sacksonville was accompanied by a not so effective offense, so having Lawrence, D.J. Chark, James Robinson, and others may make this team a competitor sooner than people realize.

Hendrickson would add the raw explosiveness to the front-4 or front-3 of the Jags defense and would bring the ability to let Myles Jack play at his own pace rather than being forced to rush constantly.  They should certainly look to bring in a defensive tackle or two in the offseason as well, if this is the route they plan on taking.

Their defense has been relatively stout throughout the last few years, but it is lacking the explosive “pop” off the line per say.  This would also allow the Jaguars to focus on using their draft picks elsewhere on other positions of need rather than getting a defensive end.

Plain and simple, the Broncos need an edge rusher.  Dre’Mont Jones is definitely developing now which is beneficial for the Broncos, but they could use another one on the other side.

I would argue this is their biggest need on the defensive side of the ball currently, as it is the easiest position to find a lack of high-level talent at.  You would also be giving Hendrickson a chance to work with and learn from arguably one of the best linebackers of this era in Von Miller (provided he gets extended).  Putting Hendrickson in front of Von as well as Bradley Chubb would be fantastic for him, as even if he does not break into the pocket, the linebackers will.

Another thing to look at would be the defensive coordinator of the Broncos, Ed Donatell.  One of the most experienced coaches in the NFL, he has had 41 years of total football coaching experience, 29 of which being in the NFL.

He is an extraordinary coach who has really solidified himself in the league, however, not many people have heard of him, unfortunately.  He has 2 Super Bowl victories as a coach, back to back in 1998 and 1999.  Both of which coming as a Broncos secondary coach, and these are 2 of the 3 that the Broncos have won ever.

Pairing up Hendrickson with a coach like this is a mix for greatness, we have seen what Donatell can do with Bradley Chubb, why not Hendrickson?

A team that is really looking for a stud defensive end to wrap up the list.  The Cardinals are also an interestingly schemed defense, as they run multiple defensive ends, but only one nose/defensive tackle.

As a 3-4 defense, they rely heavily upon edge rushers on the line, but they really have not had a highly talented one in quite some time.  This is another situation where Hendrickson would flourish behind a coach, this time being Vance Joseph.

Vance is a relatively good defensive coordinator and is a very smart person at the end of the day.  He makes adjustments to help the unit as much as possible and does very well with playcalling.  All he needs is some more young talent and this unit could be fantastic for Arizona.

The Cardinals will be looking at about $24 million in cap room moving into the 2021 offseason, which is a pretty respectable amount for a good team.  This would be plenty to pay Hendrickson, as well as bring back some of their own players if they really desire to go that route.

This unit has always been “one piece away” for the last few years now.  Bringing in an elite young talent in Trey Hendrickson to really bolster up their front-3 linemen would be a fantastic move, especially to put in front of Chandler Jones.

Despite this being a pretty big adjustment for Hendrickson to make as a player, there is a good chance he could make it in Vance’s system.  I would like his odds to continue producing at a 12+ sack level no doubt.

Why Brandon Beane Deserved Executive of The Year
Why Justin Herbert Will Be The Next Great QB
wpDiscuz
0
0
Would love your thoughts, please comment.x
()
x
| Reply