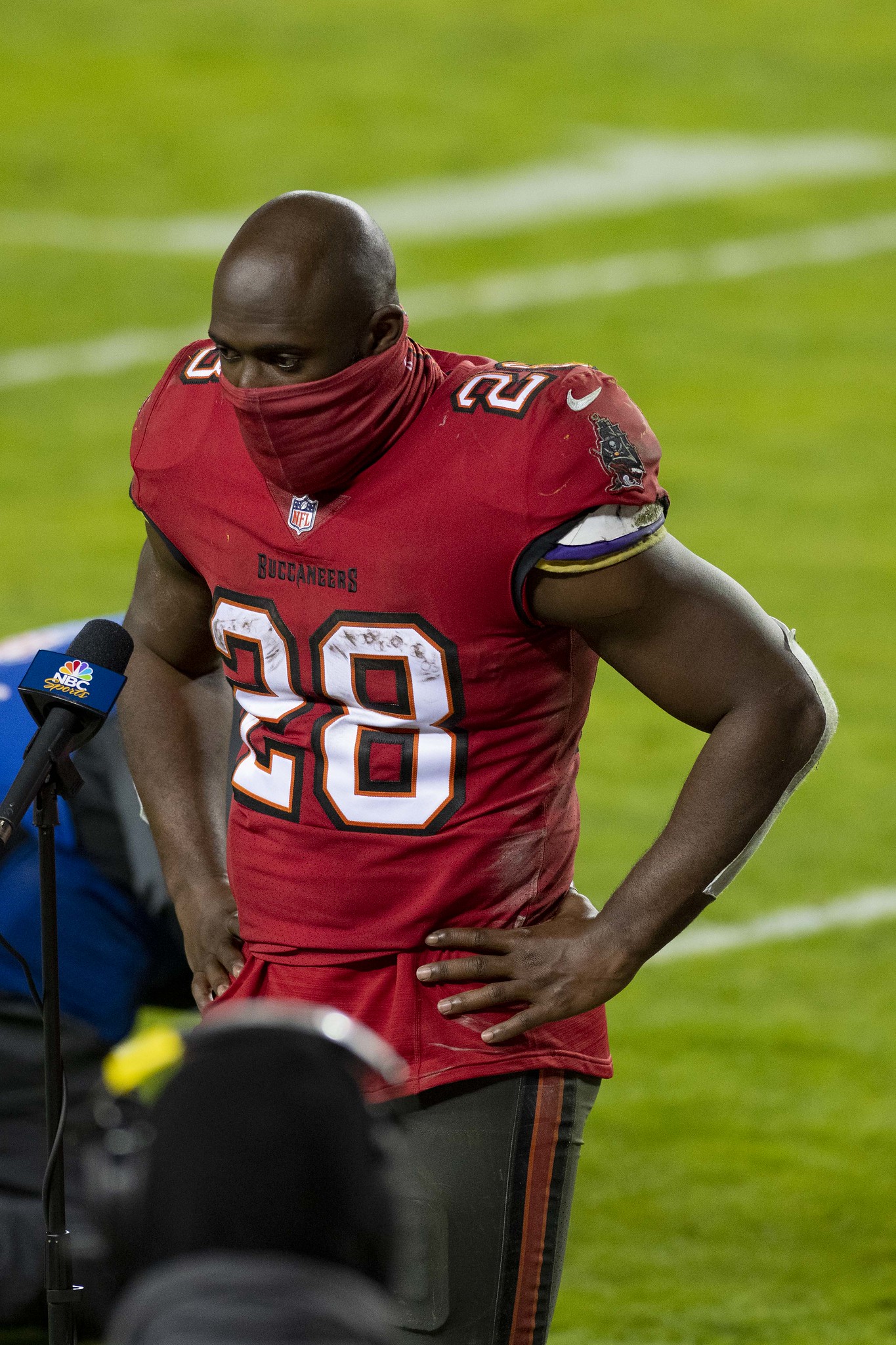 For starters, congratulations to the Tampa Bay Buccaneers for the recent Super Bowl win. They weren’t dominant during the regular season, but this team was never made for October.

Any team with Tom Brady is made to be a January football team. The downside is the question marks surrounding the team with a lot of key pending free agents.

Running back is one need, with Leonard Fournette heading to free agency. Ronald Jones was serviceable, but I wasn’t sold on him being a RB1. I truly think he needs a partner to keep his workload down. Let’s head into what I think the Bucs should do at the position in this season’s free agency.

This route is very similar to the one they took last year. If they fail to resign Leonard Fournette, Mike Davis is someone who can come in and replace the role admirably.

Filling in for Christian McCaffrey, he was more than capable of handling a full workload. They have very similar skills, both bringing bowling ball type builds and showing receiving chops out of the backfield.

He totaled 1,015 yards and even added 59 receptions during 2020. Davis also showed he can block well enough to be the third down and pass catching back.

He will turn 28 before the season starts and will more than likely sign a 2-year contract. This is perfect for the Bucs window with Tom Brady. As stated earlier, he can fill admirably into the role that Leonard Fournette carved out.

I think that he can be a nice complimentary piece to Ronald if he can figure out the offense in time.

If Tampa want to run it back and try an in house approach, Leonard Fournette needs to be top priority. Lombardi Lenny earned his nickname, totaling 448 total yards on 82 touches and scoring in each playoff game.

He wasn’t as effective in the early going, having a very inconsistent role and struggling being nicked up. Despite these struggles, he was big during their seven game win streak and got better each week. This kind of stretch is one that can carry into the next season if they choose to keep him.

If the Buccaneers are adamant on keeping their core for another run, they showed the kind of 1-2 punch that goes deep. I think that this is a very possible option, but Leonard could be heading to a pretty nice payday. I don’t blame him if he wants to chase the money and go to another destination.

This route is a bit trickier. Marlon Mack is the closest thing to Ronald Jones that the NFL has. If the Buccaneers want to go with a true 50/50 time share, this is the perfect move.

Both backs offer the same skill set and they can more than likely total about 1,800 yards together. They even have very similar 40 times and underlying stats like yards per carry and red zone participation. If they chose to go this route, they will more than likely need a pass catching back.

I don’t think either can develop into one by this time next season. Ronald Jones should end up with the most touches in this scenario, but this will ultimately limit both players upside.

However, in the event of an injury, either back will be an immediate RB1. This scenario is less likely, but a great option for a team that is trying to have a balanced offense.

Next up we have Chris Carson. This is a scenario that is more likely if Tampa Bay decides to let Ronald Jones walk.

Chris Carson will fit perfectly in this offense. He works really well in pass protection and runs with ferocity. This should complement the stout O-Line they have.

The former Seahawk has been very effective averaging over 15 fantasy points per game the past 2 seasons combined. He has shown his well-rounded ability, routinely showing burst and having 74 catches in the same time span.

I also think that the Post-Brady Bucs can use him as a safety valve for whoever comes in next. He is the kind of back who can take pressure off of a new quarterback. I don’t think Ronald is an amazing back, as he struggles with pass catching and is not consistent enough. If they choose to let him play out his contract and not resign him, they will have Carson locked up long term.

Finally we have my favorite route, with Tampa Bay taking Najee Harris at 32nd overall in the draft. Will he fall there? Maybe not, but in this scenario he does.

Najee will fit perfectly and will be the next Alabama running back to be a  stud workhorse in the NFL. He has everything you want in a workhorse. He has proven his ability to catch out of the backfield, totaling 70 receptions the past 2 seasons.

We all know that he is a ferocious runner. He had over 5.8 yards per attempt and 1,466 yards his senior season. Harris will be amazing in any offense, and I think that an offensive guru like Bruce Arians will get the best out of him, even in a pass heavy offense.

He has the best physical profile out of any rookie and the best chance to have an immediate impact. Ronald Jones will likely help ease him into the NFL speed his first season, but I think that we will see early and often the upside of Harris and that he will be the future workhorse in Tampa Bay.

While I do not believe that Ronald Jones is the future of the Buccaneers organization, I think that he is more than capable to be a complimentary piece.

My favorite outlook is the last one we talked about with Najee Harris going there in the draft. I don’t know if they’ll get Harris, but if they get Travis Etienne or Javonte Williams, they can fill the job as well.

Ronald Jones will more than likely be used as a transitional piece and won’t be someone I would necessarily want in a redraft league. In dynasty however, I think that he is interesting to see if someone wants to take a shot on him in the future and make him the lead back. I can see him having future success, I just don’t believe it is in Tampa Bay.