PFM Roundtable: One Non QB to Start a Franchise With 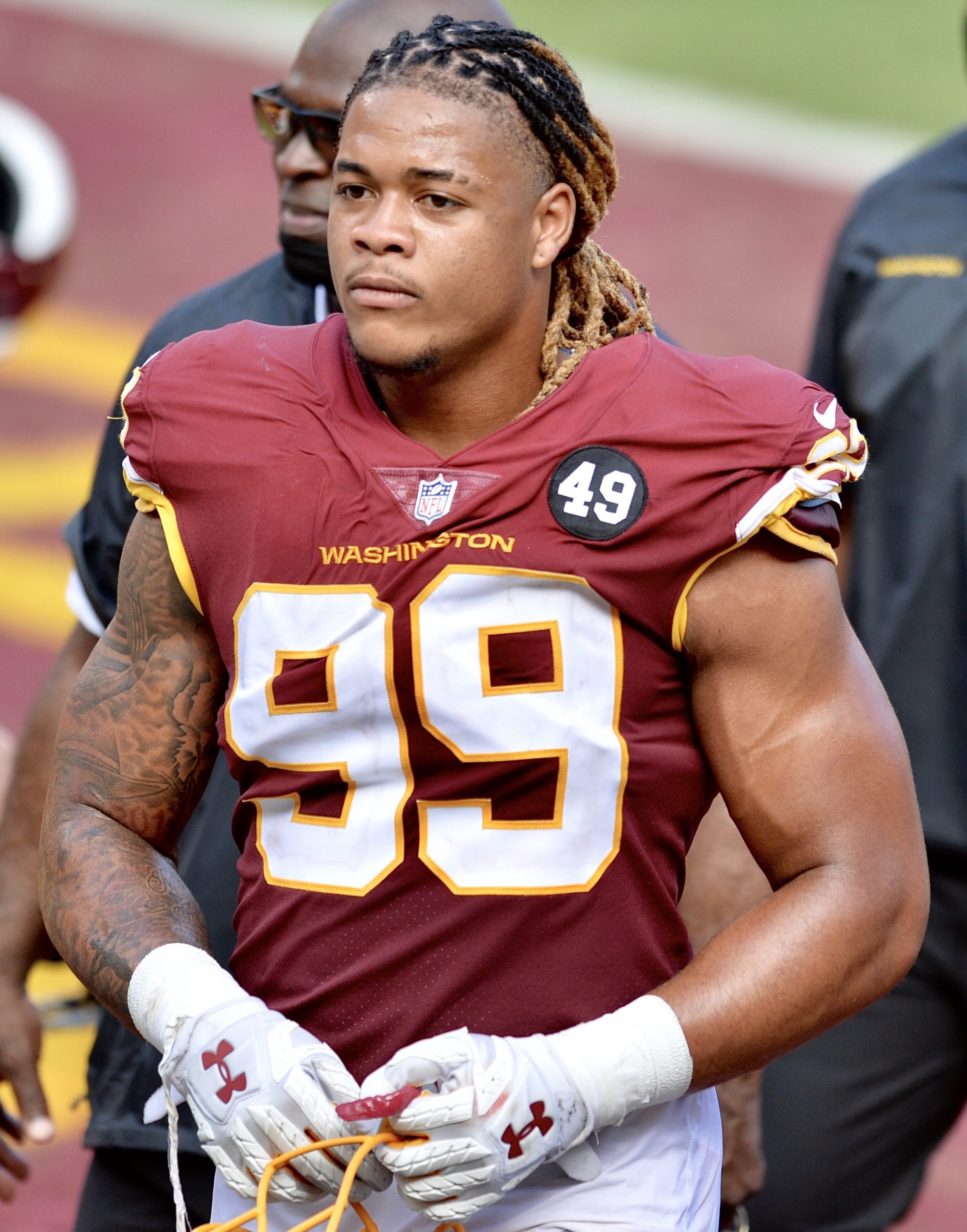 See Which Star Players Are Discussed

Ever wondered who you would pick to build a franchise around if you could not pick a quarterback? I have, and the answer to me is a no-brainer. Chase Young is who I would pick, and let me tell you why.

Premium Position: There are only a few premium positions in the league, and Defensive End is one of them. Grabbing a player at this position can set up your defensive line for years. âœ”

Prospect Profile: Below is ESPN’s Todd McShay, one of the biggest analyst raving about Chase Young as a prospect. âœ”

Athletic: You do not need numbers to tell you how athletic Young is. You see it on the field when he plays. It absolutely jumps out at you on the screen. If you need confirmation, Next Gen Stats has it for you. âœ”

Difference Maker: Watch the tape his rookie year and you see an offensive disruptor. A guy who continues to win his matchups, while being the focal point of offenses each sunday. âœ”

Contract: Young has a cap hit ranked 26th at Defensive End and 17th at Outside Linebacker. For a player as talented as he is, that contract is an absolute steal. âœ”

Wow Factor: Young has the “It” factor as he is a household name, and someone everyone takes notice of on the field. Somehow who was graded that high according to PFF is a major WOW! âœ”

The saying “you win in the trenches” is a tried and true football clichÃ©. Turn on the Bucs Chiefs Super Bowl tape, and you see the impact pressure can have on an offense. It came down to two options for me. Chase Young or Myles Garrett. They are two of the best defensive ends in the league, so the differences came down to age, and as it often does money.

Chase Young checked every box for me. Was the best player on the field for the Washington Football Team in 2020. He is the type of player you create on madden playing as a kid. Has the tools to be the best player at his position for the next decade. He is young, has a team-friendly cap number, plays at a premium position, looks the part, and is a marketing team’s dream.

A.J. Brown will transform your team

Within weeks of A.J. Brown’s 2019 rookie debut, it was clear that he was a star in the making. He has already established himself to be one of the best wide receivers in the game, and perhaps the best tackle-breaker at the position. Brown is the epitome of the modern NFL game; he has strength, speed, route running, and contested-catch skills.

Besides quarterback, the most important positions on the field are pass rusher, pass catcher and pass protector. While there is no clear second most valuable position (the top salaries at all three are relatively similar), the easiest way to improve an offense is to give them a playmaker. When starting a franchise with an unknown quarterback, give him a safety blanket like a top-tier wide receiver. The 2019 trio of A.J. Brown, Terry Mclaurin, and D.K. Metcalf is one of the best groups in recent memory, but none can dominate in as many ways as Brown.

Because The Titans drafted Brown in 2019, he is still on his rookie contract. A franchise that drafted him would only pay him 1.3 million dollars per season for two more seasons while players like Deandre Hopkins and Tyreek Hill cost $27.5 million and $18 million respectively. The salary cap is something that every NFL franchise is always conscious of, so paying A.J. 20 million dollars less than receivers with similar capabilities is advantageous. Brown is also only 23 years old, potentially giving him another decade of elite production.

Perhaps the best case for taking Brown is his talent. The most relevant factor in any decision should ultimately be if it helps the team win games in the short term and set the team up for sustained success in the long term. A.J. Brown is already seen as one of the premier young weapons in the NFL, and it is only a matter of time until the public wises up and gives Brown the title of best wide receiver in the National Football League.

When I was asked who would I start my franchise with that wasn’t a quarterback, my answer was easy. Give me the guy who made the “griddy dance” a national phenomenon, Justin Jefferson. Not only is the stellar wide receiver an excellent dancer, but also a record breaker. Since 2003, the most receiving yards by a receiver in their rookie season was held by Anquan Boldin at 1,377 yards. This past season, the 3-star recruit out of Louisiana State University broke that record finishing with 1,400 yards on the dot.

What makes this feat even more incredible is that this record stood for more than 17 seasons, and even all-time greats like Calvin Johnson, Antonio Brown, AJ Green, and Julio Jones couldn’t conquer it. Other than breaking this impressive record, Jefferson comes with great size at 6’1, youth at 22 years old, a winning attitude, and the motivation to be the best. After not being a highly touted recruit, the all-around receiver has always worked harder than his peers to get to the next level, and I don’t expect that trend to stop anytime soon. With his strong work ethic, likeability, and opportunity to break several other receiving records over the next decade, I couldn’t think of a better player to build my team around.

The most electric RB in the league is hands down Alvin Kamara. Kamara may not throw defenders or rush over 2,000 yards — matter, in fact, Kamara has never rushed over 1,000 yards in a single season. Yet, AK is still the top all-purpose ball carrier in the league.

Kamara captured a career-high 21 touchdowns in 2020. He’s also been a consistent, elite player in the receiving game at the RB position. The Saints RB has had over 700 receiving yards in three of the last four seasons.

AK is so dynamic that he could be a WR3 on many rosters across the league.. outside of being an elite player “inbetween the tackles”.

I know RBs start to breakdown after 26 years old, but the Saints should have little worry about their do it all 25 year old RB showing any signs of slowing down moving forward. They made a smart decision to extend the player that puts up freakish workout videos in the offseason to a long term contract in the 2020 offseason.

With the NFL season officially through, it’s time to start looking at who the best players are in the league. With an interesting twist, I’ll be aiming to pinpoint the perfect non-quarterback in the NFL to build a franchise around. That should be none other than Aaron Donald.

After having another impressive season, Donald finished 2020 with 45 total tackles, 13.5 sacks, and four forced fumbles. He obviously dominated the year and put on another magnificent performance.

When building a franchise, it’s important to have a staple to build around. He provides everything a team needs to wreak havoc on the defensive line. Donald is one of the main reasons why the Los Angeles Rams’ defense has been so good the last several years.

In comparison to other positions to possibly build around, starting in the trenches is usually the smartest route to go. NFL games are won on the line. So if you have solid linemen, then you’ll always have a chance to win games.

Everybody is familiar with the saying, “offense wins games, but defense wins championships.” That point was proven this season as we witnessed the Tampa Bay Buccaneers defense demolish the Kansas City Chiefs offense. When building a franchise, Donald provides that tough, hard-nosed defense that’s needed to win in the trenches. Giving any roster a huge advantage on the defensive line.

At the end of the day, Aaron Donald is a franchise player. He has the size, speed, agility, and strength to completely take over a game. The Rams should feel incredibly lucky having him on their team, as he doesn’t seem to be slowing down any time soon. It doesn’t matter he’s already 29 years old, as I foresee Donald to continue playing at a high level for at least three more years.

If I’m building my franchise around one player, he must’ve proven he can be elite and still have his best years ahead of him. Calvin Ridley checks both of those boxes and is on track to be the next great receiver in the NFL.

The former-Alabama standout was in full-on breakout mode in 2019 before an injury cost him the final two games. His teammate, Julio Jones, exploded to overshadow his progress. No such thing happened in 2020, and Ridley showed the league that he can be the WR1 in any offense. In 15 games, the 2017 first-round pick tallied 143 targets, 90 catches, 1374 yards, and nine touchdowns. He made the All-Pro second team and was top-10 in yards, touchdowns, and receiving yards.

If you want further proof that Ridley belongs in an elite company, look no further than the following stat. Only nine receivers in NFL history have at least 200 catches and 25 touchdowns in their first three seasons. Ridley is one of those nine. Here’s the rest of the list.

The difference between those other eight receivers and Ridley? They didn’t have a future Hall of Famer across the field from them. The 26-year old is destined for greatness, and I would gladly start a franchise with him as the centerpiece of my offense.

If you want to build a franchise you need star players all around. However, one of the most important positions is wide receiver. D.K Metcalf has shown in his two years of being in the NFL he is the guy to build around. At 6ft 3 and 229lbs he is a big bodied receiver who can battle for any catch against the defense. We all saw how quick he could be at the 2019 combine recording 4.33 seconds for the 40 yard dash. This guy was considered a freak of nature after the combine but he has reproduced it in the NFL as well.

In his first year he received 900 yards from 58 receptions and seven touchdowns. He then surpassed that in 2020 receiving 1,303 yards from 83 targets and ten touchdowns. The real question you have to ask yourself is can he improve even more in the future? There is a strong argument that he will get more targets so in theory more targets means more yards and touchdowns.

Another reason you should pick Metcalf is that he has shown how reliable he is. In two seasons he has suited up for all the 32 games he could of played in. This is a massive positive as you need your main franchise guy to be fit and healthy as much as possible. Hopefully this will be something he will be able to keep up through his career.

Metcalf showed how good he is this year and was rewarded with a pro bowl selection. There is no reason why he cant make this a regular thing and become the number one wide receiver in the NFL. On top of that if he could keep fit and carry on with these averages over ten years he would be a hall of fame standard receiver. So the question is why wouldn’t you want to build your franchise around him?