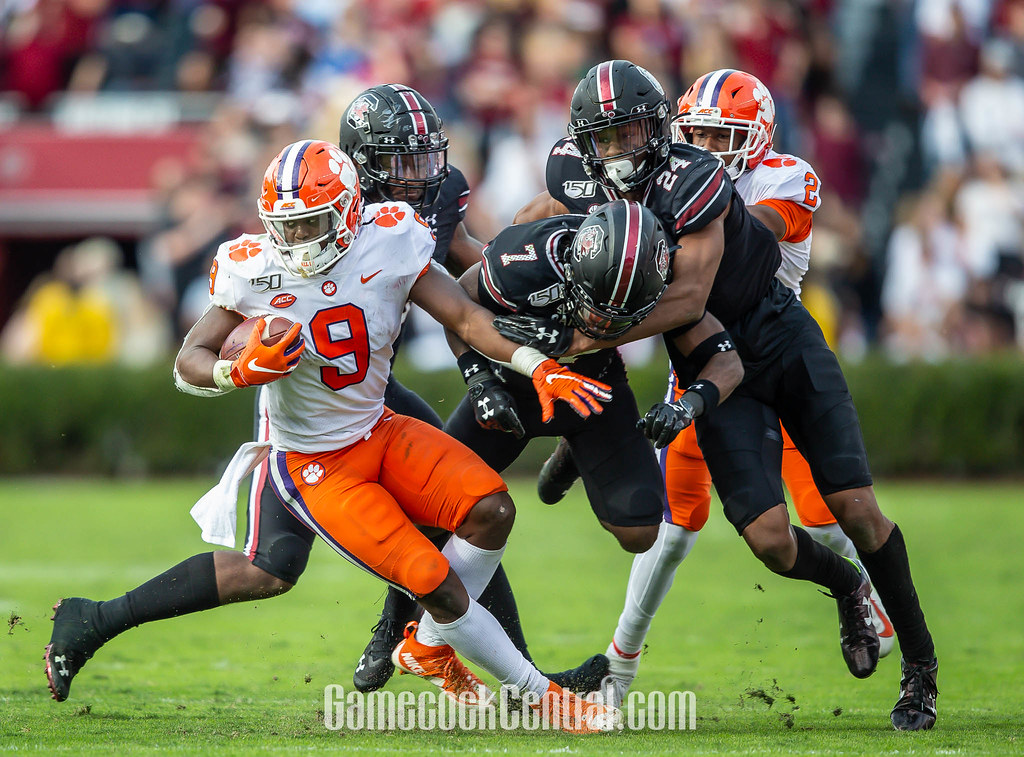 Where Will Justin Fields Land?

I’m still scribbling this pick in. It is quite obvious that the Clemson quarterback is going to Duval County. Trevor Lawrence will be the Jacksonville Jaguars franchise quarterback for a decade plus.

Zach Wilson is a step-above Sam Darnold and fits the pro-style mold. The BYU signal-caller was this year’s high riser in college football. Wilson has top-tier arm talent, can make precise throws off-platform and mobile enough to extend plays. Zach Wilson with Mike LaFluer is a dream combination.

Tua Tagovailoa’s success will be predicated on the pieces around him and he needs all the weapons he can get. Pairing Tua with his former college teammate turned Biletnikoff winner is a brilliant idea. Devonta Smith would bring amazing route-running, fantastic hands and elite body-control to the Dolphins offense.

The Atlanta Falcons are reportedly keeping both Matt Ryan and Julio Jones for the 2021 season. That removes the Falcons from drafting a quarterback with the fourth pick. Grabbing the best defender on the board is the move for the Atlanta Falcons. Pairing Patrick Surtian with A.J. Terrell is an innovative way to generate a young duo on the outside for Dean Pees defense.

This is another obvious selection. The Cincinnati Bengals MUST protect Joe Burrow if they’re to generate possible long-term success. Burrow is coming off a major knee injury and will need major body guards upfront. Sewell is exactly that, his play-strength is insane and his mobile frame makes him the best tackle prospect since Joe Thomas.

The Carson Wentz Era is over in Philadelphia. The Justin Fields dynasty is about to begin. Fields has all the physical tools in the world with his tantalizing deep ball, extremely mobile and pristine accuracy. He needs some polish in his internal clock work and throw velocity but otherwise he is a complete quarterback. Lastly, Pairing Justin Fields with a quarterback guru like Nick Sirinana would generate a young can’t miss duo in the city of brotherly love.

The Detroit Lions have a lot of work to do on both sides of the ball, so grabbing the best available player is the right way to go. Jaylen Waddle is as explosive as they come and if the Lions don’t retain either Kenny Golladay or Marvin Jones, Waddle could be wide receiver one come week one. Waddle’s skillset is perfect to help the Lions compete in the explosive NFC North.

The Carolina Panthers have one of the NFL’s worst secondaries on paper, that is about to change. Caleb Farley is everything you want in a corner and more, he would fit in naturally opposite of speedster Donte Jackson. Farley has long-arms, can hinder the receivers at the point-of-attack and best of all, use his frame to box out and erase receivers. Farley has the potential to be a Pro-Bowl cornerback in the NFL.

The Denver Broncos are in search of a partner for rising Bradley Chubb as Von Miller’s days in Denver could be numbered. Rousseau’s insane athletic profile would look amazing next to Chubb’s. Gregory Rousseau is 6ft 7in and 265 lbs, yet moves faster than outside linebackers. He has a great speed to power combo. Vic Fangio’s tutelage would allow him to unlock his full potential and become one of the NFL’s best pass-rushers.

Tyron Smith is only getting older and it may be time to consider drafting his heir apparent. Samuel Cosmi has the highest upside of any tackle in this class, but is relatively raw in terms of technique. Sitting behind Smith would allow Cosmi to polish all his bells and whistle before taking the field. Also, it is very Jerry Jones-esch to fall in love with a homegrown Texas product.

Daniel Jones is starved of a top-tier weapon and Chase could step in day-one and be that guy for him. The last-time we saw the LSU star on the field, he was creating history with the tigers. Ja’Marr’s physical playstyle and never say die attitude when catching the football should pair well Joe Judge and his culture in the Big Apple.

This is another example of having a young franchise quarterback and not allowing his offensive line to be his downfall. Grabbing Rashawn Slater would give the Changers offensive line versatility that they have lacked in recent years.

Kwity Paye is a perfect scheme fit for Mike Zimmer’s defense. Paye can slide inside on a pinch and play the run. Kwity Paye is the best run defending edge in this class. He is also a skilled but developmental pass-rusher.

The New England Patriots spent two third round picks on tight ends last year but I don’t think it was enough. Kyle Pitts is a special talent who can come in day-one and instantly produce in the passing game. The Patriots lakc weapons overall and Pitts can line up at Y for them. This is a great combination between player and team picking.

Patrick Peterson is only getting older and the Arizona Cardinals need to get better in pass-coverage. Jaycee Horn’s physical playstyle will put the NFL on notice. Horn could be the best man-to-man corner in this cycle. Pairing him with Pat P, Budda Baker and Byron Murphy would be a major step up from Will Muschchamp’s defense last season.

Micah Parsons slide attributes to attitude and behavioral issues, not because of athletic ability. Parson can blitz, cover running backs and tights as well as contain the run. If Parsons can get back on track with a fiery coach like Jon Gruden, he could be the best linebacker in all of football.

Jeremiah Owusu-Koramoah is the most versatile defender in this draft. JOK can play linebacker in packages or play safety in nickel or dime packages. The Butkus award winner can play at the line of scrimmage as well and plays with umph behind his pads. Versatility and ferocity are both traits Brian Flores covets and are why JOK is a perfect fit for the Miami Dolphins.

Christian Darrisaw is a perfect fit for Washington’s run-first offense. Darrisaw is a technically sound tackle with great footwork and this cycle’s best reach and combo skills. The Virginia Tech tackle has an uncanny ability to make it to the second level in run blocking. Christian Darrisaw will start day one and rip open holes for Antonio Gibson and J.D. McKissic

The Chicago Bears are primed to lose Allen Robinson this offseason and they will need to replace his talent and production in this offense. Rashod Bateman is a copy of Allen Robinson, Bateman has pristine route-running skills and wins contested-catch situations. By adding Bateman to the offense, the Bears are less significantly hindered by Robinson’s departure.

Dillon Radunz next to Quenton Nelson would create the most physical duo in NFL history. Dillon Radunz had an amazing week in Mobile and should be a consensus round one player now. Radunz’s play-strength and leverage are unlike anything I have seen this cycle.

The Tennessee Titans are desperate for pass-rush help and it is on the way. Phillps is the most boom or bust prospect in this class. His injury history is very alarming and could cause some teams to take him off their boards entirely. However, when healthy, Phillps has dominated in all facets of football and will dominate in the NFL.

Terrace Marshall is a touchdown machine and an overall playmaker on the outside. Wilson-to-Marshall already sounds like a good-ahead score. Marshall is a big physical receiver who dominates at the point-of-attack and punishes opposing corners. The former LSU would pair well opposite of Jamison Crowder.

Jenkins fits the Pittsburgh Steelers profile, physical playstyle and never-say-never attitude. Jenkins could slide in at right tackle on day one and allow for Chuks Okafor to man the left side. Pairing Jenkins next to David DeCastro is one way of getting the run game reinvigorated too.

The Jacksonville Jaguars have a horrendous offensive line and they need to beef it up to protect their young commodity in Trevor Lawrence. Eichenberg can step-in day one and derive success, Eichenberg is a better run-blocker than pass-blocker. Jaguars franchise running back James Robinson will love running behind a force like Eichenberg.

Denzel Ward hasn’t had a partner-in-crime since being selected in 2018 and that is about to change. Ifeatu Melifonwu had an amazing senior bowl and he’s shot up draft boards. The Syracuse defensive back oozes physical talent and has some of the longest arms I have ever seen. He is sticky in man coverage and has a large enough frame to combat both physical receivers and tight ends. Joe Woods will be pounding the table for a defensive back like Melifonwu.

The Baltimore Ravens still need pass-rush help, a tale as old as time. Azeez Oljuari is a perfect scheme fit for the Ravens. The AFC powerhouse likes more agile pass-rushers who can follow the outside track and have a bag of pass-rush tricks on hand. Ojulari is a master of the outside track and has the dip-and-rip plus the cross-chop down. Defensive coordinator Wink Martindale will be ecstatic to find out he landed Ojulari.

Marshon Lattimore’s future in New Orleans is on the rocks due to his expiring contract and the team’s lack of cap space. In the event he is not resigned, it is crucial that they look for potential replacements now more than ever. Eric Stokes is a primarily man corner who can shadow other teams wide receiver ones (like Lattimore) did in coverage. Stokes has incredible ball-skills and is one of the more smooth cornerbacks in the draft cycle.

The Green Bay Packers need help all over their ramshackled defense. Zaven Collins will help seal up the middle of the defense and give them a true field general. Zaven Collins has a traditional linebacker build with a 6ft 4in and 260 lb frame. The Bednarik award winner is a stellar run-defender and can develop splash plays in pass-coverage.

The Buffalo Bills could not keep Patrick Mahomes on the bench during the AFC Championship and that was their downfall. Najee Harris would help reinvigorate Buffalo’s run-game and push them over the top. Harris can make plays when holes break down and can be a receiving back for Josh Allen to rely on. This is a perfect marriage between prospect and team.

Mac Jones is a mold of Tom Brady. The Tom Brady system has been clicking in Tampa Bay and if success is going to continue post-Brady, they need a quarterback who fits the mold. Mac Jones’s game smarts, overall football IQ and athletic profile is very similar to Tom Brady. Bruce Arians and Byron Leftwich coaching up Mac Jones while letting him sit behind the G.O.A.T. is a perfect way to ensure he can command this offense once the reins are given to him.