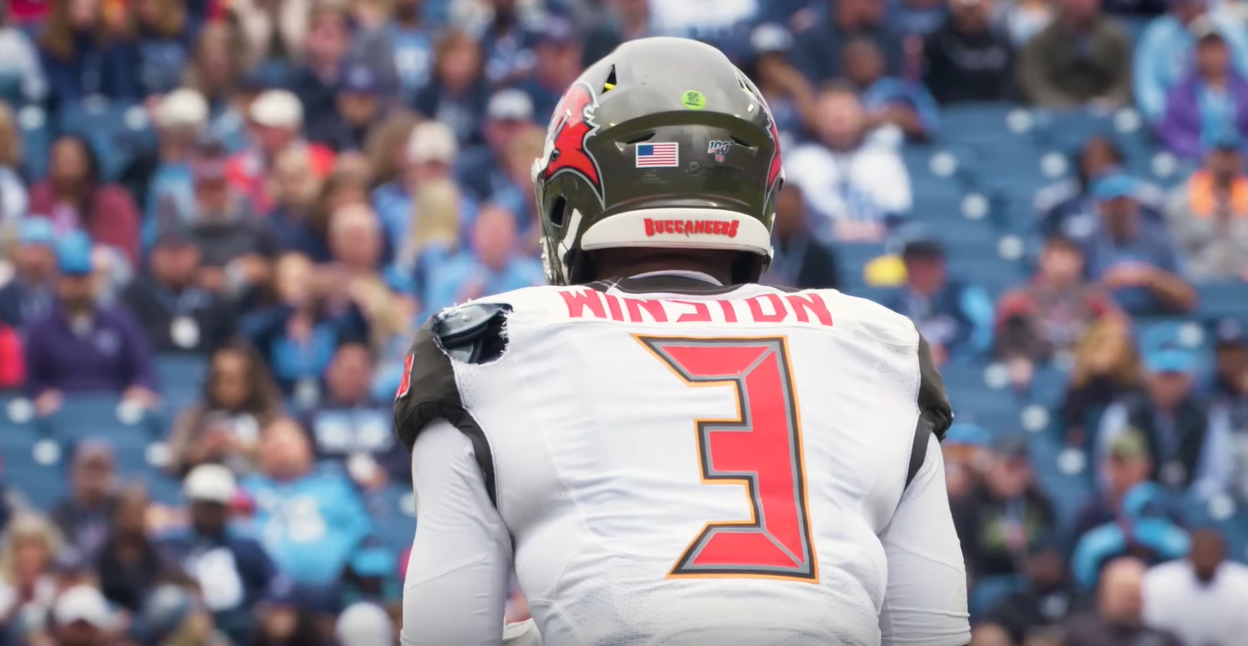 "File:Jameis Winston 2.png" by Tennessee Titans is licensed under CC BY 3.0

Which NFL Teams Should Get Jameis Winston?

Jameis Winston has taken a fall from grace since he was the number one pick in 2015. The former Heisman trophy winner spent five years in Tampa Bay but was unreliable. His last year in 2019 saw him throw 33 touchdowns but also 30 interceptions in a crazy year. He has spent this year at New Orleans sitting behind Drew Brees but is now a free agent. Winston has the ability to be an NFL starter and he may have developed with a season out of the limelight. With that in mind we look at which teams should go and get Jameis Winston.

The Washington Football Team made it to the playoffs this year despite using four different QB’s this season. They have got a strong defense that will take them a long way for the next few years. On the offense, they have got a high-quality running back in Antonio Gibson and a quality wide receiver in Terry McLaurin. However, the one area they desperately need to improve is at QB.

Washington currently have Alex Smith, Tyler Heinicke and Kyle Allen on the roster. Smith has done amazingly well to get fit and play again after his horrific injury that nearly cost him his life. He has shown he is still capable of winning games but he isn’t the answer for Washington to take the next step. Tyler Heinicke has been signed to a two year deal but apart from one playoff loss he hasn’t played. Kyle Allen missed half the season due to injury but has shown in his past that he isn’t a massive talent.

Money is not an issue for Washington this off season as they currently have $41m in cap space. Winston is not going to cost much as he is being estimated to cost around $5m a year. Washington are not in a position to draft a top end QB out of college this year so a free agent move makes sense. Winston might not of shown great reliability but he has shown that he can perform at a higher level than what is currently there.

Verdict : Washington have the potential to become a quality side but they are missing a good QB. Winston has the upside to be much better than what they have and it wont cost them much to find out.

The New England Patriots had a tough year finishing with a losing record for the first time since 2000. Last year they finished 7-9 with Cam Newton as their main QB for the year. Newton was only there on a one year deal to see how he went and wont be back for another go. This team is not looking that attractive to QB’s that want to move considering the team that is there. The wide receiver core is a mixture of poor or ageing players and the running back room doesn’t have a star man in it.

The one area where the Patriots are looking good is that they have got plenty of cap space. They currently sit with $68m to play with and so spending $5m a year on Winston will be easy to afford. On top of that they will be able to go out and bring in some offensive talent to help him out. Defensively they are still a strong team but they need to spend this extra money otherwise they could be in a long slump.

One of the biggest problems with Jameis Winston is his unreliability. He showed that unreliability at Tampa and so needs a quality offensive coach who is experienced. The Patriots have got someone like that in Josh McDaniel’s and head coach Bill Belichick. Winston has a massive upside and maybe this coaching team has the experience to control his aggressive play.

Verdict : The Patriots have got Jarrett Sitdham and Brian Hoyer at QB. They desperately need to bring someone in and Winston is cheap if they cant get a permanent solution.

The Chicago Bears had an up and down season this year but managed to finish with an 8-8 record. This was enough to get them in the playoffs but they lost in the wildcard game against New Orleans. One of the main reasons for them not to be able to push on was due to the poor quality of QB’s in Chicago. Mitchell Trubisky and Nick Foles shared the work load over the season but neither showed they could be the main guy.

Trubisky has now become a free agent as the Bears chose not to pick up his fifth year option. Foles however, is still contracted to Chicago until the end of 2022. Despite this he showed that he is not the guy with ten touchdowns and eight interceptions over nine games this year. Winston showed in his last year at Tampa that he can be just as good as these two if not better.

One reason that this move might not happen is the cap space that the Bears currently have. They are currently over spent by $1.8m but they do have the ability to maneuver some money. It wouldn’t be to hard to renegotiate some contracts in order to make the money available. Currently the Bears have a solid team, especially on the defensive side but they need a better QB to make the difference.

Verdict : This is unlikely but they do need a QB who is better than what they have. They need to make cap space but that shouldn’t be to tough for them to do.

The New Orleans Saints had a good season but ended up losing out in the Playoffs to Tampa Bay. Drew Brees looks to have retired after a decent season but not to his normal standard. When Brees missed time out due to injury Taysom Hill took over as the starter but Winston is liked in New Orleans. Sean Payton has said before that he believes Winston should be a starter and wants to bring him back.

One problem for the Saints is that they are in a massive hole when it comes to cap space. They currently are $65m over spent and need to make lots of changes before they can resign anyone. They also will be picking late in the draft so it will be unlikely that they will get a QB who is ready to play. Winston will only cost around $5m a year but even that will be tough to make happen.

However, the Saints should do everything they can in order to get Winston back. He has sat behind Brees for a whole season and knows the team well. He has got an experienced play caller in Sean Payton who wants him to come back. If anyone can manage Winston and turn him into a more reliable QB then it Sean Payton.

Verdict : This is where Winston should end up but it will depend on if the Saints can create the cap space to bring him back.