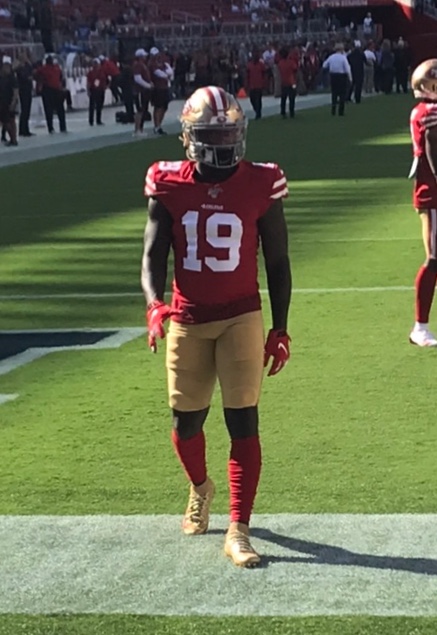 With one of the most dynamic receiver groups in the entire National Football League, the San Francisco 49ers are going to be an exciting team to watch in 2021 and beyond. Even though we are unsure at this point who will be under center out in the Bay next season, we do know that he is going to adore the plethora of play makers that will be surrounding him.

Wide receivers Deebo Samuel and Brandon Aiyuk are looking to set the league on fire next season. After just playing in five games together in 2020, the hope for the 49ers is that both players will be healthy and ready to terrorize defenses next Fall. Not only are the Niners excited about their wide receiver duo being on the field at the same time, but “the Faithful” get pumped up when they are on the field together as well.

As the rest of the world is excited about these two studs, dynasty football managers should be as well. Both players are young, capable of running the entire route tree, and possess the ability to score every time they touch the ball. Looking ahead, I want to share with you all why I believe you should buy or sell these dynamic receivers in your dynasty leagues.

DEEEEBO is not only a fun name to announce, but one hell of a football player. Selected in the 2nd Round of the 2019 draft out of the University of South Carolina, the all around receiver has been a joy to watch. In his rookie season, Deebo brought excitement to his fantasy owners by finishing as the 32nd ranked reciever in PPR leagues.

With a WR3 finish in his rookie campaign where he played in 15 games, Samuel has shown that he can be productive. From Weeks 8 to 16 in 2019, Deebo averaged 14 points per game in full point ppr. Even in 2020, the five games where Deebo was healthy and played over 60% of the offensive snaps, he averaged 14.5 ppg.

Now I understand that there’s a lot of concern about Deebo’s durability as he was limited to just seven total games in ’20, but his consistency when he plays as shown above and talent makes him a buy for me. And if there’s one thing that every good dynasty owner knows, is that you buy low and sell high. There’s no better time to buy a young, stud receiver than when he misses some time the season before.

Other than only being 25 years old and a great buy low candidate after a disappointing season, the wide receiver in a running back body is tough to bring down. Since 2019, Deebo averages 9.8 yards after the catch which is the best across the NFL in that span. With this league leading ability, it’s easy to see why the Niners also get the swiss army knife receiver involved in the running game as he averages 8.4 yards per rush in his career.

I can’t say that I don’t blame managers for wanting to move on from the big bodied receiver after this past season, but the return you would get doesn’t match the potential that he still possesses. I view Deebo as a “poor mans” AJ Brown, and honestly there’s a real chance that he finishes as a top 24 WR in 2021. Buy now while you still can, and before we know who will be throwing him the ball next season.

Out of Arizona State University, the former Sun Devil showcased his talent in 2020 and showed football fans why the 49ers moved up in the first round to draft him. In his rookie season, the 6’1 receiver finished as the 35th ranked wide out in in ppr leagues, and 33rd in standard. His 12.5 yards per reception and 12.8 yards per carry are big time numbers, and justify why his owners are excited for his future.

What is exciting about Aiyuks outlook, is that he was still productive last season when all three of the 49ers top receiving options saw the field. Weeks 4 through 7 saw Kittle, Deebo, and Aiyuk play together, and the first round pick saw 21 targets while hauling in 13 of them for 189 yards and a score. When you throw in his 38 yard touchdown run in week 4, he averaged 12 ppg.

However, I find myself struggling to want to buy Aiyuk in my dynasty leagues. Even though he finished as WR5 among the rookie receivers, I have concerns about him always being the third option in San Francisco’s passing attack. The Niners finished last season as the 16th highest team in regards to pass attempts, but that was with a 6-10 record. I don’t expect them to pass the ball as much as they did this past season as the defense will be healthy again putting them in more winning situations.

As you can see above, the impressive rookie receiver is capable of helping out his fantasy owners, but a few dominoes have to fall for him to be the weekly starter you may want him to be. When both Kittle and Deebo play, Aiyuk’s production was that of a WR3, but those numbers may be hard for him to sustain as his team will be vastly improved in 2021.

I do love Brandon Aiyuk the player, and I believe in his talent, but I’m willing to be bold and see what I could get for him. If I needed help at another position, I believe you could dangle the soon-to-be second year receiver out there to address your team’s needs. His first round pedigree and impressive rookie season warrants a nice return.