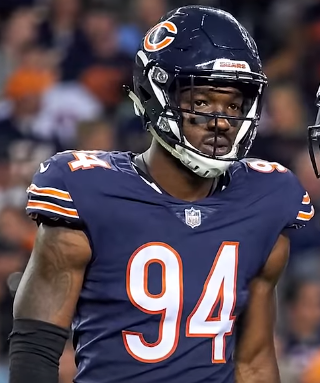 Who Needs Leonard Floyd on Their Team?

Los Angeles Rams linebacker Leonard Floyd is a free agent this offseason and has garnered attention from multiple teams after a strong 2020 season. He is valued to cost around $6-7 million a year which makes him affordable to a lot of teams. During his time in Chicago and LA he played 70 games and produced 29 sacks and 139 solo tackles and probably should have made this year’s Pro Bowl after a great year with LA.

With that in mind we take a look at who the top fits are for Leonard Floyd.

The Buffalo Bills had a great season winning the AFC East for the first time in 25 years. They then had a playoff win against Indianapolis but lost the AFC Championship game to Kansas City. One area that the Bills were weaker was in the defense, especially at the linebacker position. Also, their main linebacker, Matt Milano, is a free agent this year and it will cost a lot to keep him. There is also some debate as to whether the Bills should keep A.J Klein as he wouldn’t cost much to get rid of.

The biggest question the Bills need to ask themselves is how do they want to set up defensively. Last year saw a mixture of a 4-3 defensive formation but also at times they used coverage linebackers. However, a player like Leonard Floyd showed his versatility with the Rams this year as they used different formations. Floyd is the type of player that could make a big difference for the Bills defense.

One potential issue for the Bills will be finding the cap space to make the move but they could do it. They currently have just over $3 million of free money to use and with a few adjustments could get the room for Floyd. Given the potential changes that could happen at the linebacker position for the Bills, this is a move they need to make.

Verdict : The Bills would be a good spot for Floyd as he would want to go to a contender. The main issue is if they can find the money and that might stop it from happening.

The Indianapolis Colts were another team who made it to the playoffs after a good season. They couldn’t quite make it past the Buffalo Bills in the Wildcard round but showed how good they can be. Defensively the Colts had a really good season and finished ranked the third-best defense in the league.

Affordability will not be a problem for the Colts as they have a large war chest to go into free agency. They currently have around $50 million to spend so the expected value of Leonard Floyd won’t be an issue. On top of that, the Colts are a team looking to take that extra step and make it to the Super Bowl. This will appeal to a player like Floyd who would be leaving a Rams team that should be legitimate title contenders in 2021. He won’t want to leave LA and miss out unless the team he goes to can compete as well.

Verdict : The Colts have got the money and look like potential Superbowl contenders. They need an extra linebacker to help Darius Leonard and Floyd could be that guy.

The Miami Dolphins had a decent season and were a little unlucky to miss out on the playoffs. They finished the season with a 10-6 record and lost a few games they feel they should of won. A big decision to make in this offseason for the Dolphins will be if they stick with rookie QB Tua Tagovaiola. If they stick with Tua then we could see more free agent acquisitions in Miami. If they trade for a more experienced QB then they will have less money to spend.

The Miami Dolphins have got a good young defense and will develop in time. However, one area that needs a bit more cover is at linebacker and a potential Pro Bowler makes sense. Jerome Baker has shown positive signs at the position but he needs help and Floyd would be a good choice.

The money to sign a player like Leonard Floyd isn’t a problem for the Dolphins. They have $28 million to spend if they choose to and Floyd’s guide of $6/7m won’t break the bank. The Dolphins had the fourth ranked defense in the NFL last year and Brian Flores knows a strong defense is needed. An experienced head who is in his prime would make a lot of sense to push the Dolphins into the playoffs next year.

Verdict : The Dolphins have got plenty of cap space in order to make this move. They were close to the playoffs this year but they may want to spend their money on other areas first.

The Cleveland Browns have had a massive transformation over the last few years and are now a playoff team. They finished the season with an 11-5 record and gave the Kansas City Chiefs a good game before losing. New head coach Kyle Stefanski has turned to a strong run game and defense in order to win games. However, the Browns were ranked as the 17th best defense and one area that needs improvement is at linebacker.

The linebacker unit in Cleveland has been a problem for a long time now and that needs to change. They bought in B.J Goodson and Malcolm Smith but neither have been spectacular. If the Browns want to progress and become a regular playoff team then they have to bring in better. Leonard Floyd would be better than both of these guys.

Cleveland is in a nice spot when it comes to cap space and so can get some upgrades in. Currently, they have got $25 million worth of free money so Floyd would be very affordable.

Verdict : Linebacker is an area that the Browns have been trying to fix for a few years now and Floyd could be it. They have the cap space and are moving in the right direction.