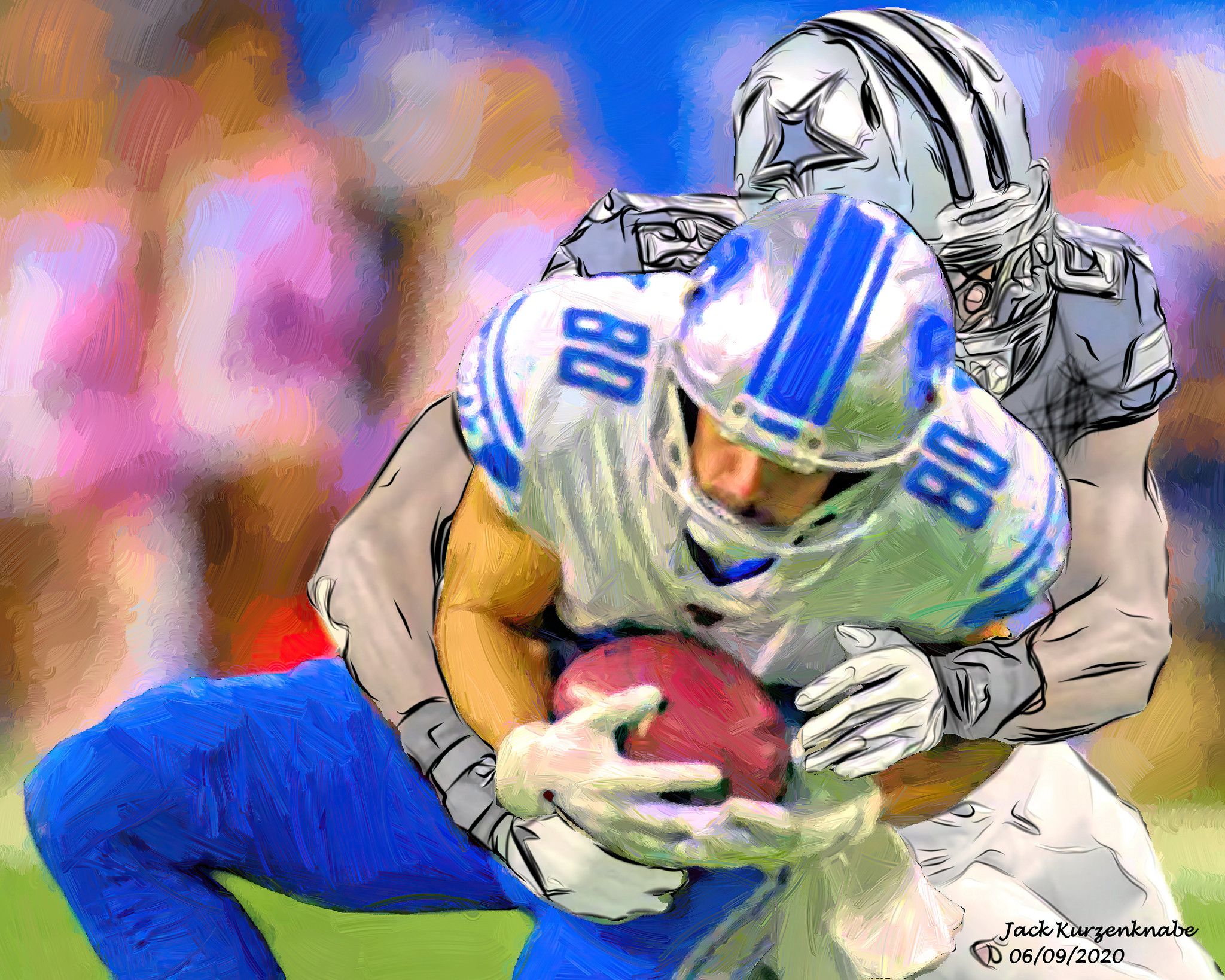 Should The Lions Bring Adrian Peterson Back?

Okwara had a career season this year in Detroit notching 32 tackles, 10 sacks, and 3 forced fumbles. He was one of the only bright spots on an otherwise lackluster defensive front.

At just 25 years old, Okwara is at an age where many pass rushers in the league tend to hit their stride. He’s due for a payday, but in my opinion is one piece to the puzzle the Lions just can’t give up. With so many other free agents set to clear up cap space, if I’m the front office, I’m trying to make sure Okwara is putting pen to paper on an extension.

Despite many fans cries to extend Golladay, it now seems the star receiver’s future in Detroit is uncertain. On one hand, I could see that it would make sense to hold onto to Golladay to give Jared Goff a solid weapon and a better shot to show the league what he’s got.

On the other hand, the type of money Golladay seems to be looking for just doesn’t seem to fit the Lions current situation as far as their rebuild and cap space. It has been rumored that Golladay wants a top 10 wide receiver type contract.

Golladay only played 5 games in the 2020 season while struggling with an injury to his hip. Even though he still managed to score 2 touchdowns and average 16.9 yards per reception in those games, the nagging injury may be too big of a concern to overlook. It pains me to say this, but if KG can’t come down on his asking price, I’m letting him walk.

There are too many other wide receivers hitting free agency this off season and too deep a wide receiver class in the draft for me to think that the team needs to cough up $16mil/year plus.

Jones Jr. proved to be Matthew Stafford’s go-to weapon in a season that saw Kenny Golladay miss a majority of the games. At 31 years old, Jones Jr. is still not showing signs of slowing down and is a fantastic contested catch wide receiver that can also create surprising separation at times.

Jones Jr. put up 978 yards and 9 touchdowns in the 2020 season. His highlight reel speaks for itself.

Alas, Jones Jr. has been quite open with the media about his desire to hit free agency and end up with a “contender”. Not much to argue there as this team most likely is not going to be that for some time. If he’d come back on a reasonable 1 year deal, I’d be happy to have him. But, in the interest of respecting his wishes, the Lions should let him go.

Prater had an uncharacteristically down year in 2020. Many Lions fans gasped in shock as he missed field goals from what would seem to be reasonable distances. In fact, Prater finished the season with a 75% field goal percentage. That’s the lowest percentage on a season for Prater since 2008 in Denver where he posted 73.5%.

But, hear me out, Prater has still got the boot! The Lions (now former) special teams coordinator, Brayden Coombs said, “I can tell you guys that Matt Prater has not lost his fastball. He can still crush the ball. We’ve talked all year about how he’s had a little bit of inconsistencies with the field goals, but make no mistake about it, the guy still has a cannon for a leg so I’m not worried about that right now.”

And to be perfectly honest, I’m not either. You don’t just let a kicker like Prater walk. He is consistently one of the best in the league. I’m not going to let one down year scare me off. After all, Mason Crosby once missed 4 field goals and 1 extra point in 1 game versus the Lions at Ford Field. He recovered just fine…

Sanu did not see a crazy amount of playing time during the 2020 season, but the time that he did see had a mainly positive impact. In 7 games for the Lions Sanu tallied 16 receptions for 178 yards and 1 touchdown. Of those receptions, 12 went for first downs.

At 31 the question remains as to how much longer Sanu plans to play in the league. But, all things considered, and with a wide receiver corp that looks to be depleted by free agency this offseason, I’d re-sign Sanu to keep a veteran presence in the locker room.

He will most likely not demand a contract that will hit the Lions in the cap space where it hurts.

What a rollercoaster ride it has been for Agnew in Detroit. His play from season to season has certainly had its ups and downs.

Although the team’s attempt at transitioning Agnew to wide receiver this past season did not pan out well, his value truly lies in his punt-return and kick-return abilities. Agnew walked out of the 2020 season with a 12.7 yard punt return average, ranking 2nd in the league. He also averaged 28 yards on kick returns throughout the season, ranking in the top 5.

Agnew’s 1 punt return touchdown was a thing of beauty. There is plenty of value in a returner of his caliber. For a reasonable deal, and as a returner only, I’d give him a shot to keep going and re-sign him. Plus, it sure sounds like he wants to be here:

Harmon had an alright season in Detroit. Just alright. It’s hard to say much more than that as the whole defensive unit suffered a meltdown of epic proportions the further into the season they got.

Harmon finished the year with 54 tackles and 2 interceptions. Although it is intriguing to think about what he may offer as far as leadership through a rebuild, my gut says to let him walk and let Tracy Walker get back to some semblance of his 2019 self.

Additionally, at 30 years old, would Harmon even want to stick it out through a top to bottom rebuild?

I’m not even sure I remember Lions football with Don Muhlbach. I mean seriously, in 2004 I was in 8th grade. I was just beginning to really get into football games with my dad. The man is living legend!

Albeit, retirement is in store for Muhlbach certainly sooner rather than later, I’m letting him stick around for as long as he sees fit. He doesn’t command very much cap space and you’d just hate to see him go.

It also seems like he may not want to go just yet. According to Pride of Detroit, Muhlbach stated, “I’ve done it before. So maybe I could help with (the rebuild). I do feel like I want to get this thing going in the right direction before they get rid of me.”

Please do Don, please do.

I totally see why the Lions were eager to bite at Everson Griffen this season when they did. At that point, the Cowboys were having a fire sale, the Lions were desperately trying to fix their defense to make a playoff run, and Matt Patricia and Bob Quinn were eagerly vying to keep their jobs.

In 7 games in Detroit, Griffen posted 3.5 sacks and tied the franchise record for quarterback hits in a game at 5 against The Washington Football Team.

I love Griffen’s enthusiasm, but at 33, easily where most pass rushers’ careers begin to wind down, I’m willing to say thanks for your time here and best of luck.

“The Patriot Way” is no longer THE way in Detroit. That most likely means that those players that were brought into specifically fit that mentality will be walking out the door this offseason too. Example: Amendola.

Nonetheless, I think Amendola will see fit to move on, and I’m A-OK with the Lions letting him in hopes of creating their own culture with their own guys.

Listen, All Day can still play. And yes, he’s definitely not what he used to be. But, he showed us this season that he still has enough gas left in the tank to make a few plays. He finished the 2020 season with 604 yards and 7 touchdowns.

D’andre Swift is easily the starting running back of the future here in Detroit, but Peterson’s veteran leadership cannot be understated. One of the best to ever do it is exactly the type of person you want in the locker room.

Peterson’s 1 year deal this past season was already seriously cap space friendly at just $1.05 million. My guess would be that he would come back for a similar contract, or less. If that’s the case, I’d re-sign him based on his value as an influence to the younger players alone (his ability to run it still doesn’t hurt either).

Peterson told Josina Anderson, “I’d still like to stay in Detroit. I believe we still have a good team. We just need a few more pieces to improve.”