Why The Dallas Cowboys Must Keep Dak Prescott 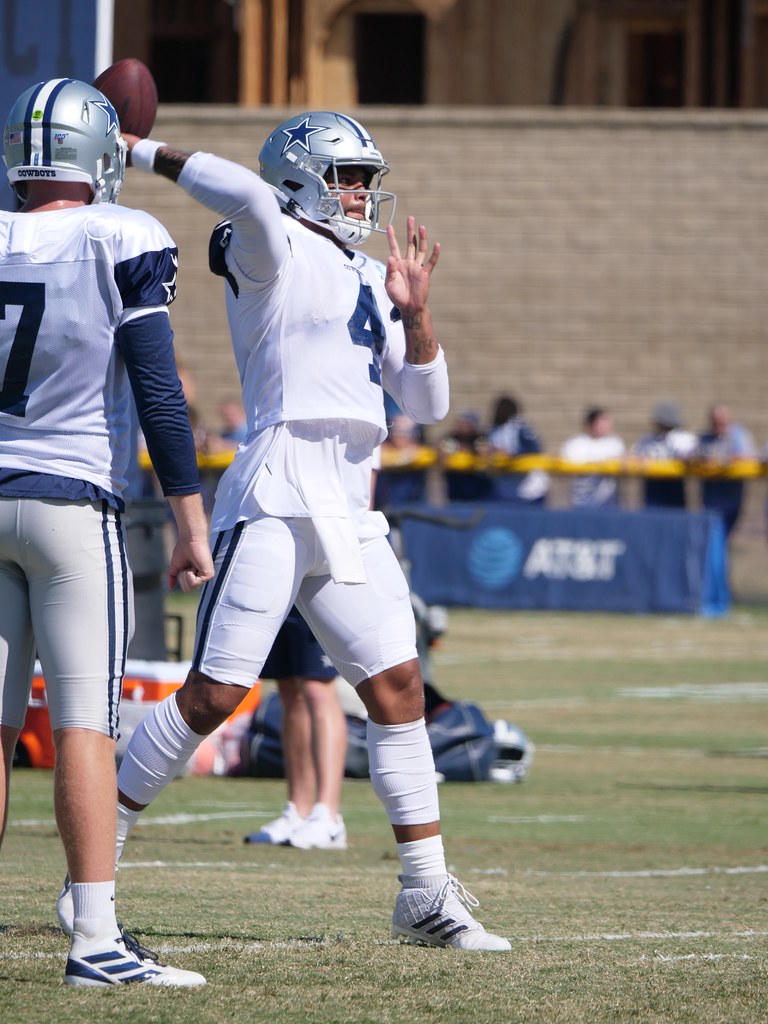 Why Prescott Is The Future

This offseason the Dallas Cowboys face one of their biggest decisions in the past decade, do they re-sign their franchise quarterback Dak Prescott?

The Dallas Cowboys and Dak Prescott have been at somewhat of a standstill over the past two years, and it’s all coming to a head this offseason. Prescott has expressed his desire for a long term deal after performing extremely well over the past four years, but nothing has been worked out yet. Both sides seem to have great interest in an extension, yet no deal has been made.

The idea of potentially moving on from Prescott has been thrown around this offseason in the media, the idea heightened by Dak’s season ending injury, as well as new potential trade targets in Deshaun Watson and Russell Wilson. Here’s why the Cowboys should make the right decision and hammer out an extension with Prescott as soon as possible.

Under Dak Prescott, the Dallas Cowboys have consistently been a winning team. Over the five seasons before Prescott took over the reigns, the Cowboys had one winning season. The year before Dak was drafted, the Cowboys finished bottom of the division with a 4-12 record. The ”˜Boys finished second to last in points per game, with a measly 17.2.

The next year under breakout rookie Prescott, the Cowboys finished with a 13-3 record, and lost to the Packers in the divisional round off of a last second Mason Crosby kick. Dallas was 4th in points per game, and 5th in yards per game Dak’s rookie season.

The Cowboys would regress a bit over the next two years on offense without a true #1 option. Dez Bryant was no longer the star he was in the earlier part of the decade, and the Cowboys did not have any other potential #1s on roster. Dallas would make a great move to bring in Raiders wide receiver Amari Cooper midway through 2018.

Prescott would rebound greatly in 2019 with Amari Cooper and Michael Gallup as his wideouts, leading the Cowboys to the most yards in the entire league. They were 6th in points per game as well. Cooper and Gallup both were the Cowboys’ first 1,000 yard receivers since Dez Bryant in 2014. With weapons, the Cowboys had a top five offense in the league.

This past year, before he got hurt, Prescott looked like he took even another step in his game. With Cooper and Gallup returning and new 1st round pick Ceedee Lamb joining the fold, the Cowboys were becoming even more of an offensive juggernaut. Prescott through five games had 1856 yards and 9 touchdowns, alongside a usually great 68% completion percentage. For comparison, Dak’s successor Andy Dalton only had 2170 yards and 14 touchdowns through 11 games.

Through Dak’s five starts (he was injured in that fifth game as well), the Cowboys averaged 32.6 points per game. That would’ve made them the top offense in the league above the Packers and the Bills. Even if they slowed down a little bit, they still would’ve comfortably been one of the league’s best offenses.

Before he was injured the Cowboys were a top five offense in the NFL. Yes he will cost a lot of money. He might even be the highest paid player in football, but can the Cowboys really afford not to have him on their team? There certainly isn’t a player in free agency that can replicate what Prescott can do for you. Currently sitting at the #10 pick, the Cowboys are most likely out of range for a top quarterback. Even if they could draft one, there’s no guarantee that the quarterback will even be good”¦ much less as good as Prescott.

Dak since taking over for the Cowboys has been one of the best quarterbacks in football. When given weapons, he thrives. He is an extremely accurate and smart quarterback that doesn’t turn over the ball much, and gives Dallas their best chance at winning. He is arguably a top five quarterback in the NFL, and is just entering his prime at 27. When you have a really good quarterback in his prime, one that keeps getting better and better, you do not move on from that. You do everything you can to lock him up and make him the face of your franchise for the foreseeable future.