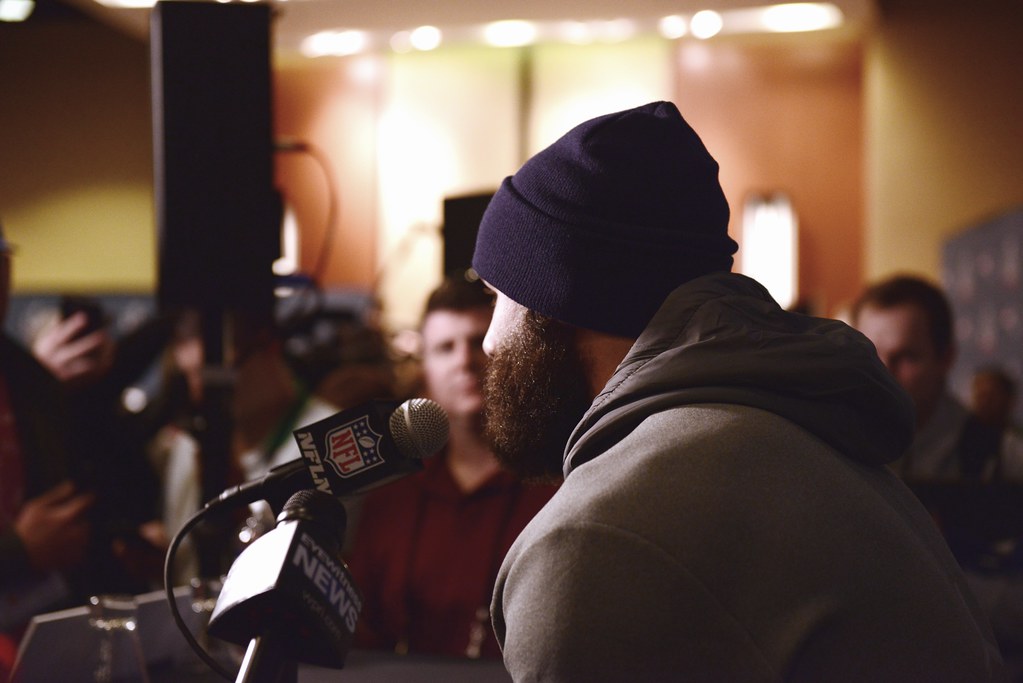 "Julian Edelman answers questions ahead of SBLI" by WEBN-TV is licensed under CC BY-ND 2.0

Which WRs Will The Patriots Target?

The New England Patriots put in a very binary effort with their future QB/WR situation this past offseason. Since Tom Brady’s departure, the WR room has been a wasteland from Mad Max.

The leading WR in 2020 was the second year, undrafted Jakobi Meyers with 729 yards. After Meyers was fifth-year wideout Damiere Byrd with 604 receiving yards. The third leading option was none other than RB James White with 375 yards.

The WR situation has been dimmer than any WR group in recent memory and now things might just have taken a turn for the worse. According to NBC Sports, Julian Edelman is “unsure” if his knee will be well enough to even play in 2021.

“Everything is proceeding as I have forseen”

The Patriots sorely missed a deep threat at WR in 2020. Cam Newton was playing Josh McDaniels game of dink and dunk, but it wasn’t freeing up the 6’6 dual-threat QB to consistently scare defenses over the top.

Newton and the Patriots deep passing attack was actually quite efficient last year. According to Playerprofiler.com, Cam Newton was ranked fourth in the deep-ball completion percentage. Yes, you read that correctly. Yet, the problem is: Cam Newton was ranked 32nd in air yards per attempt.

Perriman wouldn’t only be a big play waiting to happen with his 16.8 YPC and 4.3 speed flexed on a pedestrian Jets offense a year ago, but he could be a weapon the Patriots don’t have to break the bank for. He made $6.5 million rightfully so last year, but that number should around the same ballpark in his next contract. If Belichick wants a player to stretch the field in the free agency period or draft room, he should call Perriman’s agent in the coming days.

I believe that AJ Green isn’t the same player that he was in 2015. Yet, I believe his recent performances are closer to a negative trend of injuries and poor QB play (an exception to Joe Burrow), versus the belief he needs a nail on the coffin and he has two-three years left.

Green is still one of the utmost well-balanced wideouts in all of football. He can be a lethal third-down target, red-zone threat, and he’s still very effective at the point of the football.

Green missed nine games in 2018, missed all of 2019, but remained healthy in 2020 for all 16 contests. He registered a career-low 523 yards, but it didn’t help that the Bengals have had franchise-low success and their starting rookie QB Joe Burrow missed six games.

Green is absolutely a No. one WR that can handle the attention as such. The Patriots could be very creative with their more underrated, young wideouts, while Green takes the attention away. Much like the Patriots are missing a speedster, they are lacking a true No. one or No. two-possession WR.

Paul Dehner Jr. of “The Athletic” writes that there’s a 1% of Green returning to Cincinnati. Green played under an $18 million dollar franchise tag last year — he could be making half of that moving forward. Belichick should consider a three-year deal with the physical 6’4 32-year-old. Green would be nice welcoming to the new signal caller in 2021.

One of the WR targets for the Patriots should be one of the most forgotten players in the league: Taylor Gabriel. Due to the COVID, Gabriel decided it was best to forgo the season and sit the 2020 season out.

Taylor Gabriel would be a great value signee for the Patriots. Gabriel fits the bill of a slot, nifty wideout that could excel in Josh McDaniels orchestra. Why not get a more athletic version of their preference in WR?

Gabriel has quietly averaged 499.5 yards per season over the last four years. And Gabriel has been a steady third option for the Bears revolving door of a QB offense in of that time. In 2018, the workhorse veteran unveiled 688 receiving yards and a career-high catch rate of 72%. The Patriots could maximize his production to this standard in no time.

The Patriots could get a versatile weapon for not much pricer than a prove-it deal in Gabriel. It would be smart to have a reliable slot weapon if Edelman does in fact miss the 2021 season, as well.