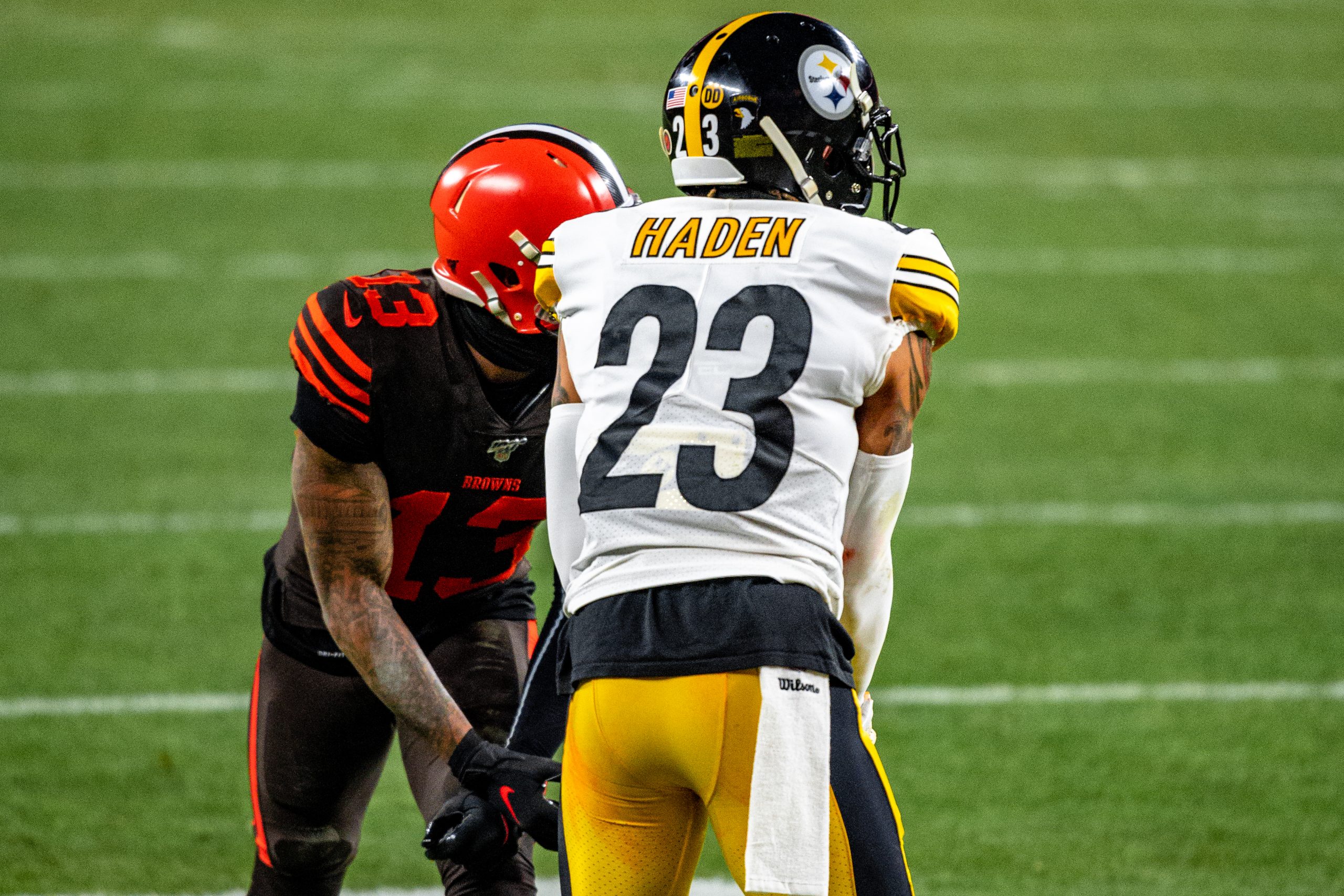 The Pittsburgh Steelers set the league on fire with an 11-0 start last year. With Big Ben back things were looking like a super bowl return for the yellow and black. However, injuries piled up, and the Steelers faltered down the stretch and finished with a 1-4 record in the last five and wound up losing to the Browns in the Wild Card round of the playoffs.

Heading into the offseason the Steelers had aging players to decide on. However, to the surprise of many, the Steelers ended up losing two starting corners during the free agency period. Starting corner Steven Nelson was released and slot corner Mike Hilton signed with the division rival Cincinnati Bengals.

That leaves the Steelers with holes to fill in the secondary. Minkah Fitzpatrick at safety combined with Terrell Edmunds helps out these corners play a lot. Joe Haden remains on the roster and will be the number one corner moving forward. Haden has had a resurgence in his career since joining Pittsburgh. Haden has totaled 10 interceptions in 56 games over four seasons with the Steelers including a pro bowl nod in 2019. Other corners currently on the roster are Cam Sutton who will have a large role moving forward as a versatile player and two young outside players in Justin Layne and James Pierre. The two youngsters have produced on special teams thus far but the 2019 draft products look to compete for a starting role in 2021.

With a lack of depth at cornerback, the Steelers will look to address that need in the draft. Along with the cornerback need the Steelers do need offensive line additions, running back, and an edge rusher with Dupree leaving. With the Steelers having the 24th pick overall they will let the board fall to them. Some high ranked corner prospects that could make it to them in round one but if not the Steelers have pick 55 in the second round and pick 87 in the third round.

Who will the Steelers have their eye on at cornerback? If you’ve been keeping up with the draft and following prospects the two at the top of the cornerback lists are Jaycee Horn and Patrick Surtain II.

Horn played seven games in 2020 and was voted second-team all-SEC. The 6’1 205 pounder from South Carolina is possibly the best cornerback in the draft. Horn has NFL pedigree. The son of former Saints wide receiver Joe Horn.

Horn had a very impressive pro day that allowed him to jump up as the best corner to some. He was clocked at a 4.39 40 yard dash and 41.5 vertical. Horns measurable showed on top this year too. He played quite well against the talented players at Florida as well as shut down Seth Williams in the Auburn game. Evaluators like the edge Horn plays with and how he competes in coverage.

Another son of a former NFL player, Surtain II is a well-regarded prospect. At 6’2, 203 pounds Surtain II took home the 2020 SEC Defensive Player of the Year Award. Surtain II is a big playmaking corner that lacks elite speed. He is a top pick in this draft and a player who can be the most productive defender in this class.

Surtain II held matchups to under 25 total yards in 10 of his 13 games. Surtain II plays well in press coverage and uses his leverage to jam receivers. He also has good ball skills and the length to break up passes.

After these guys, the next best player is Caleb Farley.

Farley is likely to be a first round pick. Some have graded him above the two guys above and think he could be the best of the group. Farley has injury concerns. Farley skipped the 2020 season with concerns for his health and family and to get ready for his NFL career. Undergoing back surgery on March 23 of this year Farley didn’t have a pro day.

Farleys injury history dates back to his first practice as a collegiate athlete. As a receiver, Farley suffered a knee injury. He flipped positions to cornerback and had a knack for playmaking. In 2019 he earned First Team All ACC Honors with four interceptions in 11 games. Farleys speed and size will allow him to run and compete athletically with anybody. As he gets coached up his instincts and talent will make him a great player.

It is likely all three of these guys are gone before the Steelers pick. If they do fall the Steelers will have to prioritize who is left on the board. However, I think it is most likely the Steelers end up with a player in this next group of cornerbacks in the middle rounds of the draft.

Newsome II is graded as a late first by some and solid second round pick. Newsome II was productive for Northwestern in his career the only mark on him is the durability concern. He only played in 21 games as in his college career. Last year he was playing at his best before suffering a groin injury in the Big Ten championship. He sat out the bowl game and declared for the draft.

Before competing in his last game Newsome II only allowed 11 catches on 34 attempts. None were completed for touchdowns nor third down conversions. He was named Third Team All-AP and First Team All-Big ten last year. Playing a multitude of coverages in his collegiate career many see him developing as a starter early in his NFL career.

Robinson has a second round grade on him with the  potential of sneaking into the first round. Robinson played his senior season at UCF but originally started his college career at Alabama. Robinson stood out to me at the Senior Bowl this year.

Primarily played in the slot and showed great press coverage skills. In the Senior Bowl, his tackling was crisp, and was able to defend well in the run game. Scouts have expressed some concern about his coverage skills as he loses the ball and his size creates openings at times. I think Robinson is a solid day two pick and a good slot fill for the Steelers in 2021.

There seems to be a theme with corners this year. His father was a four time pro bowl corner and the skills translated. Samuel Jr played well at Florida St. Despite the team being horrible Samuel Jr. made plays in coverage and was excellent in the run game.

He has been labeled as undersized at 5’10 and 184 pounds. In his last full season of games, 2019 he was named Third-Team All ACC. He opted out midway last year but led the team in interceptions with three. Samuel is seen by most fitting a zone heavy scheme but he has the athleticism and skills to play man and develop as a quality corner. Likely a slot player in his rookie year Samuel Jr. is one to watch.

Ifeatu is an intriguing prospect. Standing 6’3 and 313 pounds, his frame combined with athleticism allow him to cover all receivers. Was named to the Third-Team All ACC last season and accepted an invite to the Senior Bowl.

His size, athleticism, and footwork allow him to be disruptive at the line of scrimmage. This is his biggest asset right now as his coverage skills improve. When he lines up off man he is often allowing too much space for plays to be made and can get tricked on double moves.

Melifonwus’ older brother Obi was a second round pick back in 2017. Ifeatu has an interesting skillset that will intrigue teams. If corner doesn’t work out his skill set suits well for the safety position. He is a solid mid round prospect.

Another SEC player, from the University of Georgia, Campbell put some production on tape in 2020. A likely day two prospect he struggled last season among the best in this class in Kyle Pitts. Campbell was able to stay healthy in 2020 and was clocked with a 4.34 40 yard dash.

Campbell only totaled one interception in college. His press coverage skills are a plus but teams will likely use him in a zone scheme. Campbell is a player that needs development but has the ability to produce at the NFL level.

The Steelers will have their choice of cornerback. I think they use their first round pick on a bigger need on offense. The mid rounds will be prime for selecting a corner back. Any of these guys would fit the Steelers scheme and learning from Haden will be a huge help. Having talented safeties to help in coverage the young corner will be in a position for success in the NFL.

RB Targets For Arizona Cardinals
RB Draft Targets For Buffalo Bills: Should The Bills Draft a RB in Round 1?
wpDiscuz
0
0
Would love your thoughts, please comment.x
()
x
| Reply