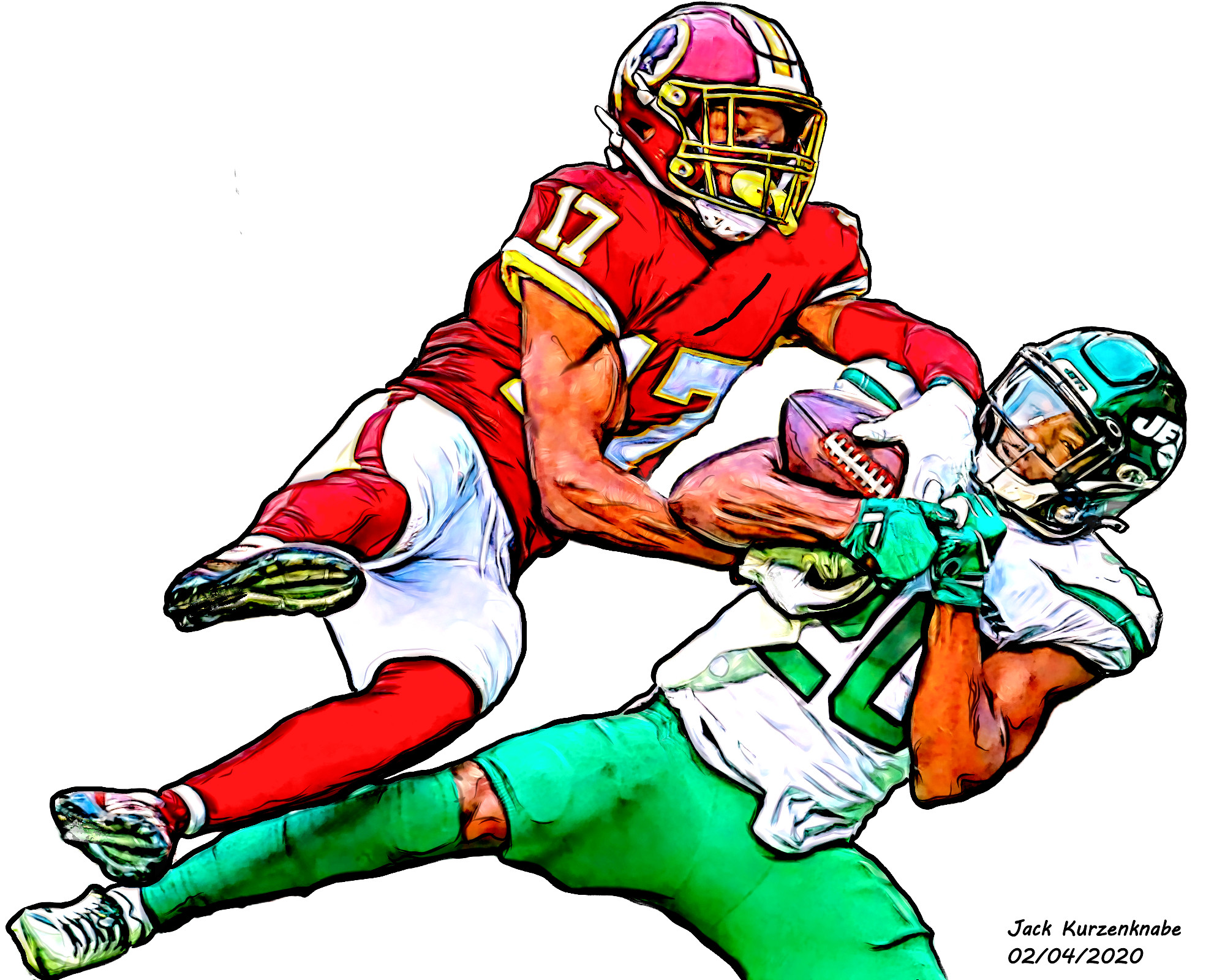 The New York Jets are a blank slate. After winning just two games in 2020, and not having a season above .500 since 2015, things are starting to change for Gang Green. The franchise just hired a new head coach, had a nice spending spree in free agency, and more recently, traded away Sam Darnold, a player presumed to be their franchise savior just a few short drafts ago.

Now, the Jets have the chance to make up for that missed pick. The bad news? With the Jaguars picking in front of them, New York will likely miss out on the man expected to be an instant NFL star, Clemson’s Trevor Lawrence.

The good news is that the Jets just so happen to be in need of a quarterback in what might be the deepest class of passers in NFL history. There are five potential signal-callers that could realistically be selected in the first round, four of whom should be available for New York to select with the second overall pick.

Here, we’ll make the case for all of them.

The Case For Justin Fields

Justin Fields was a star before taking the stage in a national championship, before even arriving at Ohio State, for that matter. Originally, the Buckeyes’ star enrolled to play for Georgia, shined bright in backup duty, and made the switch to Columbus in 2019 where he made a name for himself through two seasons of remarkable play.

2019, Fields’ sophomore season, stands as a testament to how special a talent the quarterback was in college– and the talent he has the potential to be as a pro. Through 14 games in his second college season, Fields torched the college football world with 41 touchdowns through the air, 10 on the ground, and just three interceptions.

And while 2020 marked a step back for Fields on the stat sheet, nothing he showed on film should have scouts worried. He was still an accurate thrower, completing over 70% of his throws in an eight-game season. He was still a good-enough playmaker with his legs, adding five touchdowns on the ground to his 22 through the air. He was the same strong-armed, physically tough, high-potential quarterback we all saw in 2019, and all thought he could be dating back to his Georgia days.

Maybe the step back from his sophomore season to his junior will scare some teams off– but the Jets shouldn’t overthink it if they get the opportunity. Fields took a step back from perfection to almost perfection. Build an offense around him, and he can be the first franchise quarterback the team has seen since Namath.

The Case For Trey Lance

The New York Jets had themselves a solid off-season. Robert Salah was an inspired head coaching hire. Corey Davis was a nice free-agent signing, same for Carl Lawson and Jarrad Davis. And with the second overall pick in 2021, the Jets, dare I say it, might be a fun team in the coming season.

But they are still far from a good team, and even further from a finished product.

Perfect. Draft the guy that’s far from a finished product himself.

Trey Lance is the wildest wild card imaginable in the 2021 quarterback class. In a best-case scenario, Lance’s college tape shows that he has the potential to be a cross between Lamar Jackson and Tom Brady. An incredible athlete capable of making defenders look silly on the ground, breaking 1,100 rushing yards in 2019 with 14 touchdowns as well, all on just 169 carries. And not to outdo himself, but Lance’s numbers as a passer might be even more staggering. 28 touchdowns, nearly 2,800 yards, and zero, zero, interceptions.

For those counting at home, that’s 42 touchdowns and not a single interception. It’s the explosiveness of Jackson with the decision-making of Brady. The ceiling on Lance is unrivaled, even by Trevor Lawrence.

But, of course, Lance’s potential isn’t destined to become reality. There are a few question marks still around his game. Lance played for North Dakota State, can he play at a similar level against NFL-caliber competition? Lance played just one game in 2020, and completed just 50% of his passes, was 2019 a fluke?  Will he be rusty heading into the pros?

Luckily, the Jets don’t need Lance to hit his ceiling immediately. They could roll the dice with the North Dakota State quarterback at second overall, bet on his overwhelming potential, and slow-play the process, letting Lance develop for a couple of seasons while building up the team around him.

Who knows, with the flashes he showed in college, Lance could be the best player to come out of this class.

The Case For Zach Wilson

BYU’s Zach Wilson came onto the college football scene like Joe Burrow a year before him. Unexpectedly, but spectacularly.

Wilson went from a relative unknown to a potential second-overall pick, all in the course of one 12- game season. How did he get there? By overnight becoming one of the most electric players in college football.

Wilson’s game is defined by his ability as a passer, but he’s no slouch as a runner either. Not the most explosive, or the quickest, but has enough ability with his feet to extend plays and find the endzone, adding 10 rushing touchdowns to his resume by the end of the year.

But, of course, it is Wilson’s arm that will stand out on tape. Throwing for 33 touchdowns and just three interceptions, all while completing well over 73% of his throws is impressive enough on it’s own, but some style points should also be credited to Wilson’s name. The BYU quarterback time and time again through 2020 showed a willingness to take the deep shot, and oftentimes hit it with pinpoint accuracy.

Can make any throw you need, adept at extending plays even without possessing top-tier athleticism, and one of the most accurate deep passers in the class. Those are the hallmarks of Wilson’s game, but they’re also the traits of one of his most lofty pro comparisons, Chiefs’ quarterback Patrick Mahomes.

Of course, player comparisons are often wrong. And Patrick Mahomes is a one of one type football player. But if you’re New York, and you have a chance to draft Patrick Mahomes-lite, it might be hard to pass up.

The Case For Mac Jones

Justin Fields has elite arm strength and toughness. Trey Lance has unbelievable athletic skill and worlds of potential as a prospect. Zach Wilson has pinpoint accuracy, and a ”˜Patrick Mahomes-esque’ play style that has some draft scouts salivating at the thought of what he could be as a pro.

What does Mac Jones, the junior quarterback from Alabama and reigning national champion have? Well, it’s not super easy to gauge. His arm isn’t as much of a strength as Fields’, and nobody will confuse Jones for being an athletic specimen. But what Mac Jones has isn’t so much in his ability to outshine the competition in one or two aspects of his game, but rather, it’s found in the complete nature of his playstyle.

Sure, maybe Jones was boosted by the talent around him. Having a Heisman-winning wide receiver in Devonta Smith, and two other projected first-round picks in Jaylen Waddle and Najee Harris at the skill positions definitely makes life easier.

But Jones’ play under center is what brought that talent together. It was the 77.4% completion percentage, tops in the FBS for 2020, that helped pilot Alabama’s explosive offense. It was the 41 touchdowns to just four interceptions that made the Crimson Tide such a powerhouse, even by their standards. In fact, run down the stat sheet, it will tell you everything you need to know about what Jones brings to the table.

He’s an accurate thrower. He’s a sound decision-maker. With 11.2 yards per attempt in 2020, the numbers would suggest that Jones has a good enough deep ball. And with three years on the Alabama roster to his name, Jones also has had the benefit of three years worth of established success with a college dynasty.

He’s not the fastest, or the strongest, but Mac Jones has shown the accuracy, big-play ability, and solid decision-making that could make him a worthy candidate for the second overall pick.