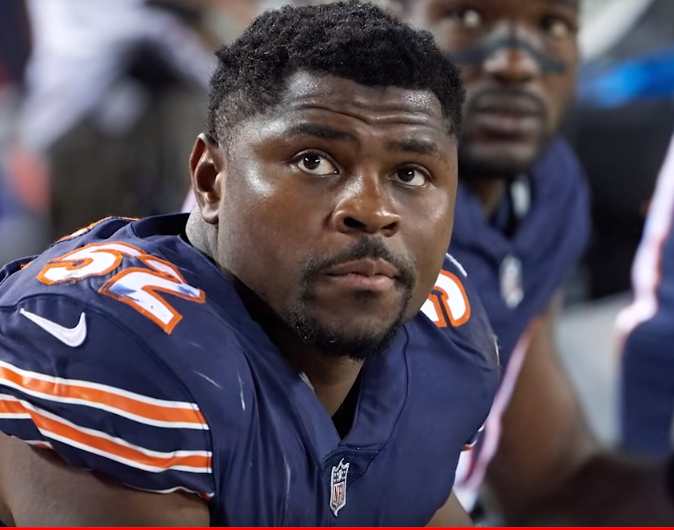 Mack is top in Chicago but is the edge rusher in the NFL’s top five?

Khalil Mack has been one of the best edge rushers in the league for a few years now. He was drafted by the then named Oakland Raiders in 2014 before moving to Chicago in 2018. Although the Bears have not been the best team around they have been a strong defence for a few years now. This has mainly been due to Mack and his leadership in the front seven. With that in mind we look at if Khalil Mack is currently a top five defender.

Why Khalil Mack is in the top five

One of the biggest reasons that Kahlil Mack should be considered a top five guy is his consistency. The guy has played 16 games every season apart from in 2018 and even then he only missed two games. Its all well and good being on the field but Mack has also produced every year he has played. He has averaged 10 sacks a season throughout his career and there is no reason that wont continue. He has also averaged around 60 tackles a season showing that he produces all of the time.

Although you can look at Mack’s stats and say that he did more with the Raiders many years ago that was because he had to do more. Since being in Chicago he has been in a better team and more importantly a better defence. Having players like Robert Quinn will bring Mack’s numbers down compared to who he had helping him out at the Raiders. Mack’s numbers may have reduced but his quality is still high and he is still impressive.

In 2018 when he moved to Chicago he produced a total of 45 tackles and 12.5 sacks in a big opening year. However, since the 2019 season people have been saying that Mack is in decline which is just untrue. In 2019 he had 45 total tackles and 8.5 sacks and then in 2020 he had 47 total tackles and 9 sacks. Aaron Donald won the defensive player of the year with 44 total tackles and 13.5 sacks. Mack had more tackles in the season showing how consistent he was. Ok, he didn’t get as many sacks but your comparing him to the top defensive player in the NFL. Although they play in slightly different positions the stats still show how strong Mack is.

On the whole it shows that Mack is still a quality defensive player and is not far away from being the best in the NFL. He is on a team that has some other strong defenders that will help him keep them stats up. Mack is only 30 years old and has a few more years left in the tank at the top level. If the Bears have a good season this year, especially on the defence, he will easily be a top five defensive player.

Why Khalil Mack is not in the top five

The biggest reason anyone has for Mack not being a top five defensive player is the signs of decline. When he was at the Raiders he was producing some insane numbers. Now that he is at Chicago his numbers have slowly fallen although still good. During his four years with the Raiders he had 282 total tackles and 40.5 sacks. In his three years at Chicago he has only produced 137 total tackles and 30 sacks. He has no chance of reaching the numbers in Chicago in the same time as he did with the Raiders.

On top of the slide in stats in Chicago he is now 30 years old and that will only hinder his ability. He still has a few more years of potentially elite talent but normally players start to drop off now. There are so many players who are reaching the latter stages of their career and you see they cant do what they did. Mack is starting to show signs of this already and it could get worse quite quickly.

It is not surprising that Mack is starting to slow down given the amount of work he got through with the Raiders. Currently Nick Bosa is considered one of the best in Mack’s position but he didnt do anywhere near as much as Mack did. If you just take their rookie year Bosa had 42 total tackles and nine sacks in 14 games started. Mack was forced to play all 16 games with 72 tackles and four sacks. That was the story for all four years he was with the Raiders and now the burnout will be there to see.

Mack is a quality player but there is some serious competition at this position which might stop him being a top five player. Nick Bosa is expected to come back from a long injury and he could be back to normal. Za’Darius Smith has been excellent for Green Bay and will likely be a top five guy. Shaquil Barrett is back with Tampa Bay looking for another Superbowl. Plus there are guys like Chandler Jones, T.J Watt, Cam Jordan and Joey Bosa. It will be tough for Mack to get back to the numbers he previously produced in order to get back in to the top five defensive players.

Overall you have to feel that Khalil Mack is still a quality defensive player but he is not what he was. He has shown in the last two years that he has declined and at his age it will be tough to get them numbers back. Also with the other defensive players around Mack wont make it into the top five defensive players.