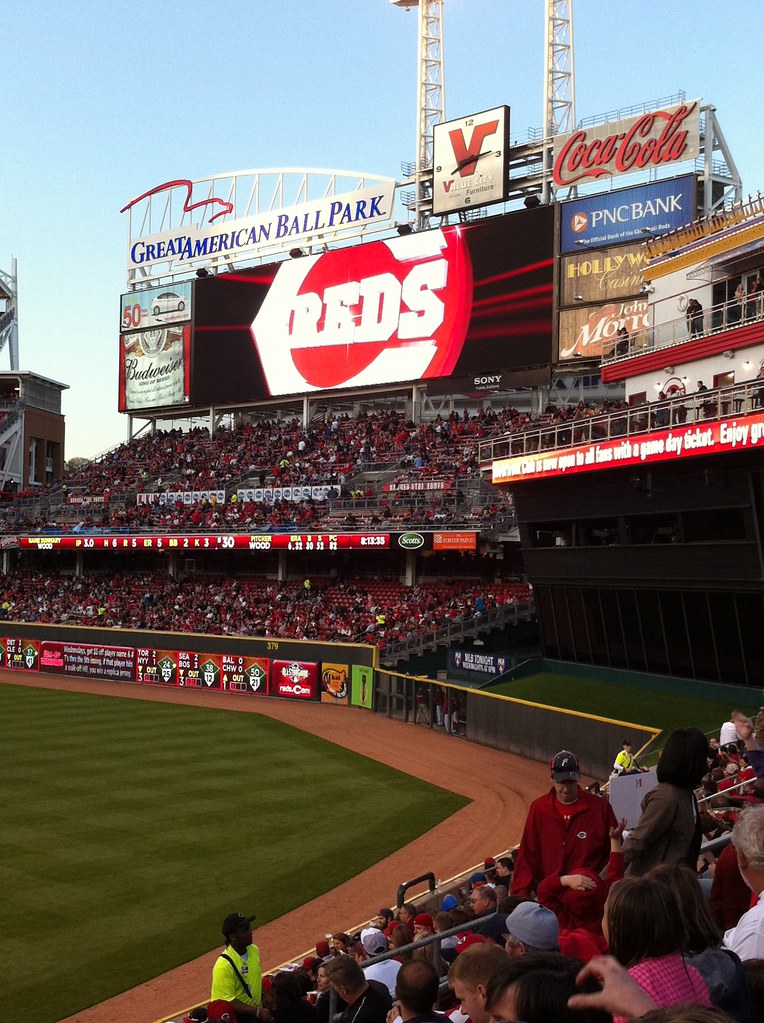 "Cincinnati reds scoreboard" by ChipMahaney is licensed under CC BY 2.0

Young arms are exciting. Luis Castillo has electric stuff with the potential to dazzle every time he takes the mound. In 2020 he made 12 starts and ended the year with a 3.21 ERA and, even better, a 2.65 FIP all despite having what was likely a pretty unlucky .329 BABIP (so he could have been even better).

Going into the season, he was a highly sought-after commodity – pitching was going fast and furious and people wanted an ace. In NFC drafts that took place between January 1 and March 31 of 2021, Castillo’s average ADP was 29.19, the 10th pitcher off the board overall right behind Max Scherzer and ahead of Jack Flaherty, Brandon Woodruff, Clayton Kershaw, and 28.42 spots before Corbin Burnes.

The players with ten spots of him, before and after, were:

I’m sure you’re yelling at me right now: “Yes, yes. You’ve made your point! He was supposed to be really good. But he’s not and I need to know why! I NEED YOU TO TELL ME THE FUTURE WITH 100% ACCURACY OR I WILL TROLL YOU ON TWITTER!”

So what’s up with Luis Castillo this year? He stinks. So far he is 1-4 in 7 starts with a 6.42 ERA (his 4.56 FIP means the fielding behind him is hurting him a bit, but not to a point where he’d be otherwise good and that bad fielind ain’t changing any time soon) and absolutely horrid 6.95 K/9.

Scratching the surface, we can also see that his ground ball rate is down from 2020 to 50.5% (from 58.4%) and his HR/FB ratio is up to 18.5% from 12.5%. This makes a lot of sense when you also notice that his SweetSpot% is up to a bloated 35% from 28.7%; more than a third of the contact against him is square. And while I am not a huge fan of citing average exit velocity, it may be worth noting here that it is up 3.3% from last year as well. Barrel% is up. Average launch angle is up. His K% is cut nearly in half. As you may have noticed, none of this is good news.

Let’s take a closer look at the zone data and see if things get any more promising (narrator: they didn’t). Castillo is in the zone slightly less, down 2.8% from 2020. This, on its own, isn’t necessarily bad, but batters are swinging at his pitches outside the zone 4.6% more and are making contact 70.9% of the time (this is way up from 52.0% in 2020). We already know hitters are making BETTER contact, and now we know they are making MORE contact on balls outside the strike zone.

Despite being in the 89th percentile for velocity, his fastball contact is up 19% while the SwStr% has gone from 15.8% to just 6.8%. The line-drive rate on the four seamer has gone from 33.3% (a career-high) to an incredible 48%. It has never been his best pitch, but it is now downright dreadful. His changeup and sinker are both being hit more often and yielding far fewer swings and misses as well. The contact rates on his slider are off the charts as well. Here’s a table comparing hitters’ chase rates, contact on sliders outside the zone, overall contact percentage, and swinging-strike rate from last year to this year:

Luis Castillo won’t be this bad all year, but I would not be expecting a stretch of DeGrom-esque brilliance that will even this stretch out. More than likely, the regression to the mean will help him, but not save his season. In fantasy, I’m not sure that if you try and sell him now you’ll get anything close to what it would take for me to trade him which means it’s best to leave him on your bench and hope he rights the ship sooner than later. That said, if you get an offer for somewhere around 80 cents on the dollar, and it helps your team right now, it is worth considering.

Let’s raise a glass to better days for Luis Castillo, for baseball is better when he is great and far worse when he is not.