Fantasy: Who are the “explosive” ball carriers in the league? 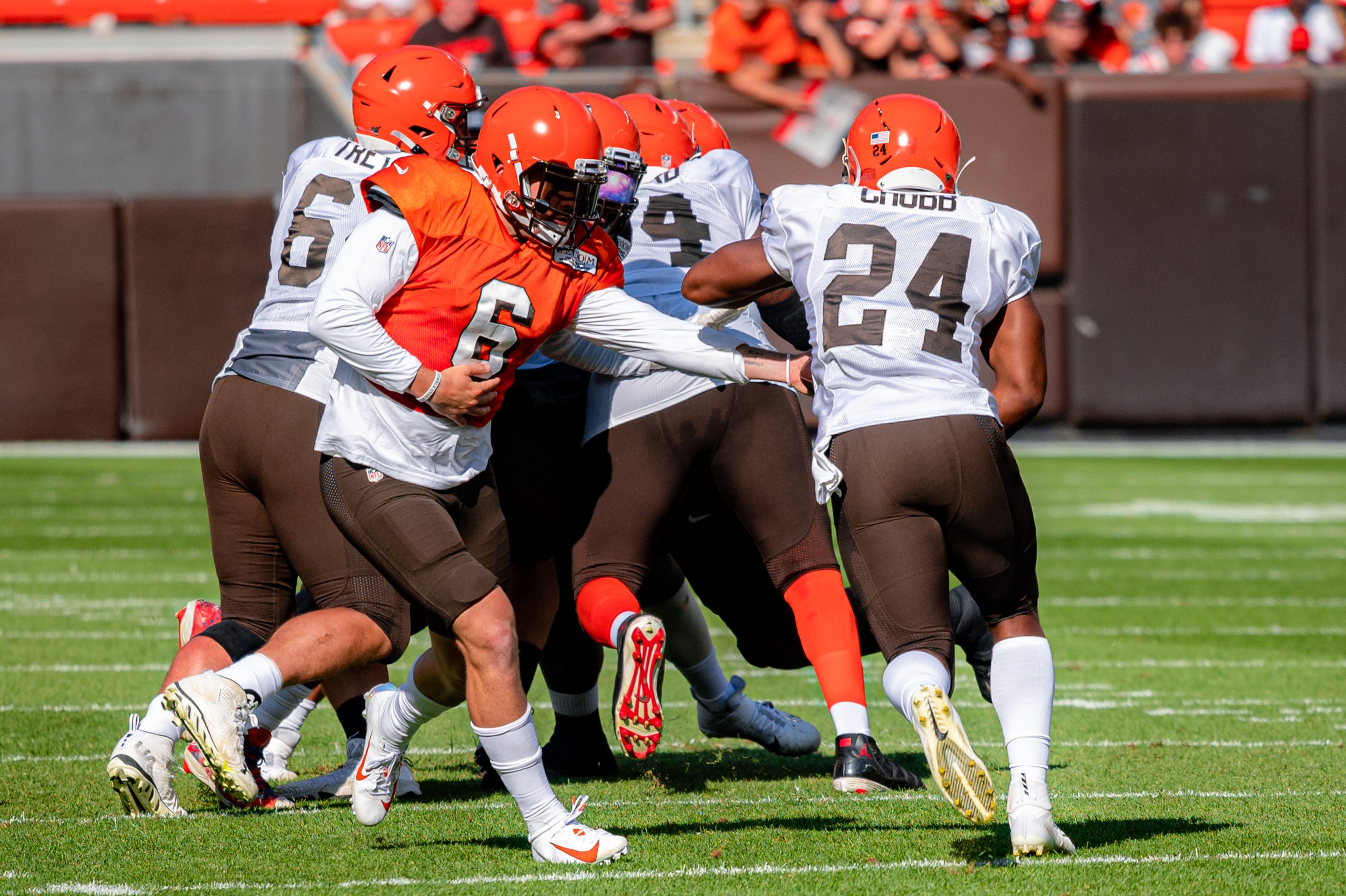 Who is the most explosive RB?

Ball carriers that have the chance to break off a big run can be a huge boost for your fantasy roster.  I analyzed all ball carriers with 100+ carries in 2018, 2019 and 2020, and how many carries went for 20+ yards.  Almost all of the ball carriers are running backs, but there were some QBs (Lamar Jackson, Josh Allen, and Kyler Murray). 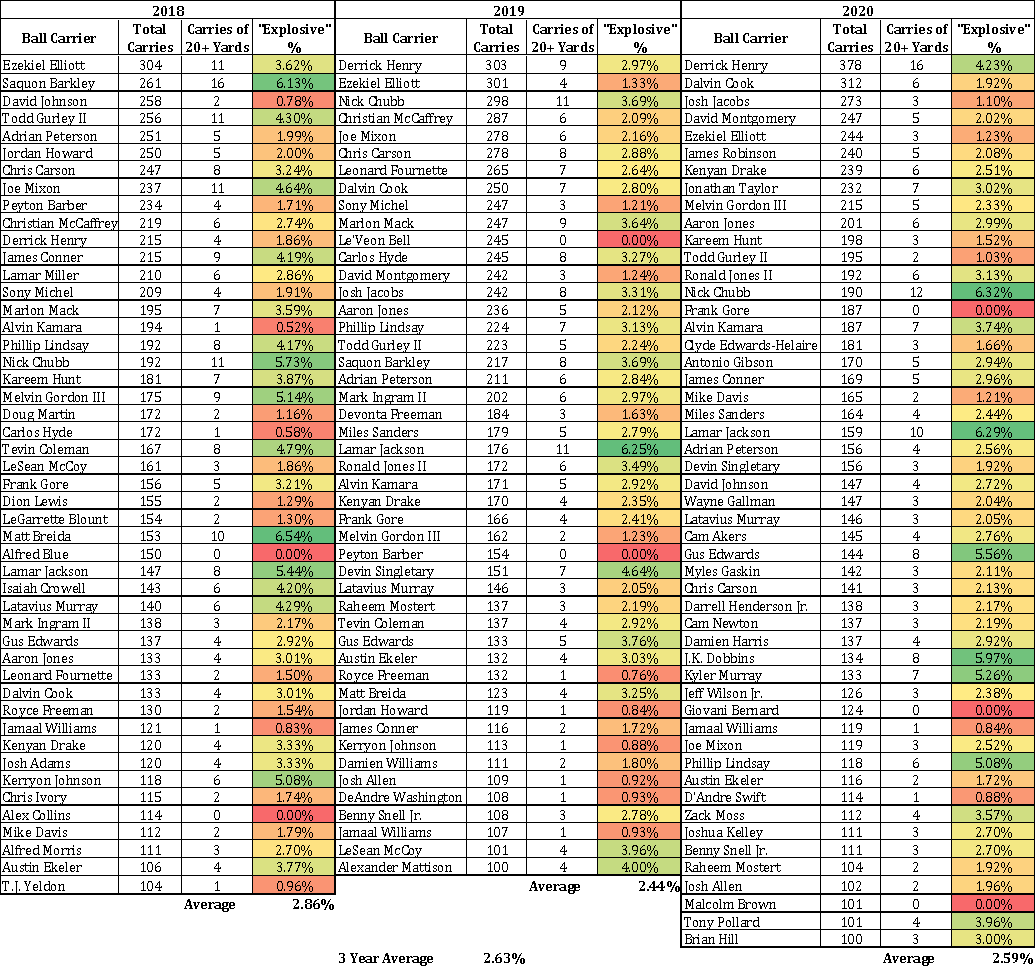 The average ball carrier is going to break off a 20+ yard run just under 3 times every 100 rushes (2.63 times).  However, there are a few players that stand out and more than double that, which can be an x-factor on your roster.  The biggest standout from 2018-2020 is QB Lamar Jackson with an “explosive” percentage of 5.44%, 6.25%, and 6.29%, respectively.  Lamar Jackson is the definition of a “Konami Code QB” that manufactures significant fantasy points with his rushing.  The RB that stands out the most across all three seasons is Nick Chubb, with an “explosive” percentage of 5.73%, 3.69%, and 6.32%, respectively.

In 2020, the Baltimore Ravens rushing offense was an explosion waiting to happen!  Lamar Jackson was at 6.29%, J.K. Dobbins was at 5.97%, and Gus Edwards was at 5.56%.  I was not expecting Gus Edwards to be so explosive, but clearly the Ravens running style knows how to create explosive plays.

Some top fantasy RBs that are clearly not explosive are Ezekiel Elliott and David Montgomery.  Both RBs still have finished as top RBs, but that is more due to volume and not explosive plays.  Elliott has been trending down the last three seasons after being above average in 2018 (3.62%, 1.33%, 1.23%).  This could be because the Dallas Cowboys offensive line has been sub-par the last couple seasons due to injuries, or the wear and tear of volume since Elliott had back-to-back seasons off 300+ carries in 2018 and 2019.  David Montgomery has played behind a bad offensive line and a mediocre passing offense.  That is a recipe for defenses stacking the box to stop the run, which limits the chances for Montgomery to break through for a big play.  The new addition of QB Justin Fields could help with some of those team deficiencies, and we will see if Montgomery can actually be explosive now or if that is just not the kind of RB he is in the NFL.

Derrick Henry has seen a significant increase in volume of carries over the last three seasons, but his explosiveness is also increasing too!  In 2020, Henry led the league in “explosive plays” with 16!  I do not know when the heavy workload will eventually slow Henry down, but so far he is trending as getting stronger.

As you get later in your draft you could use this data to try to pick up some “home run hitters” that have a chance to explode in your flex spot or RB2 spot because of bye weeks.  Based on where you can select them in the draft and their explosive potential you should pay attention to Gus Edwards, Phillip Lindsay, Tony Pollard, Zach Moss, and Ronald Jones.  None of those players are the RB1 on their teams or they have a significant split with another RB, which is why you can draft them later.  However, they are one injury away from seeing a substantial workload and have even more chances to make big plays.  Gus Edwards and Tony Pollard are the two that really stand out to me.  Both are on dynamic offenses, only have one player above them on the depth chart, and already had at least 100 carries in 2020.   When you are drafting this year try to select at least one player that can make a bang on your roster!