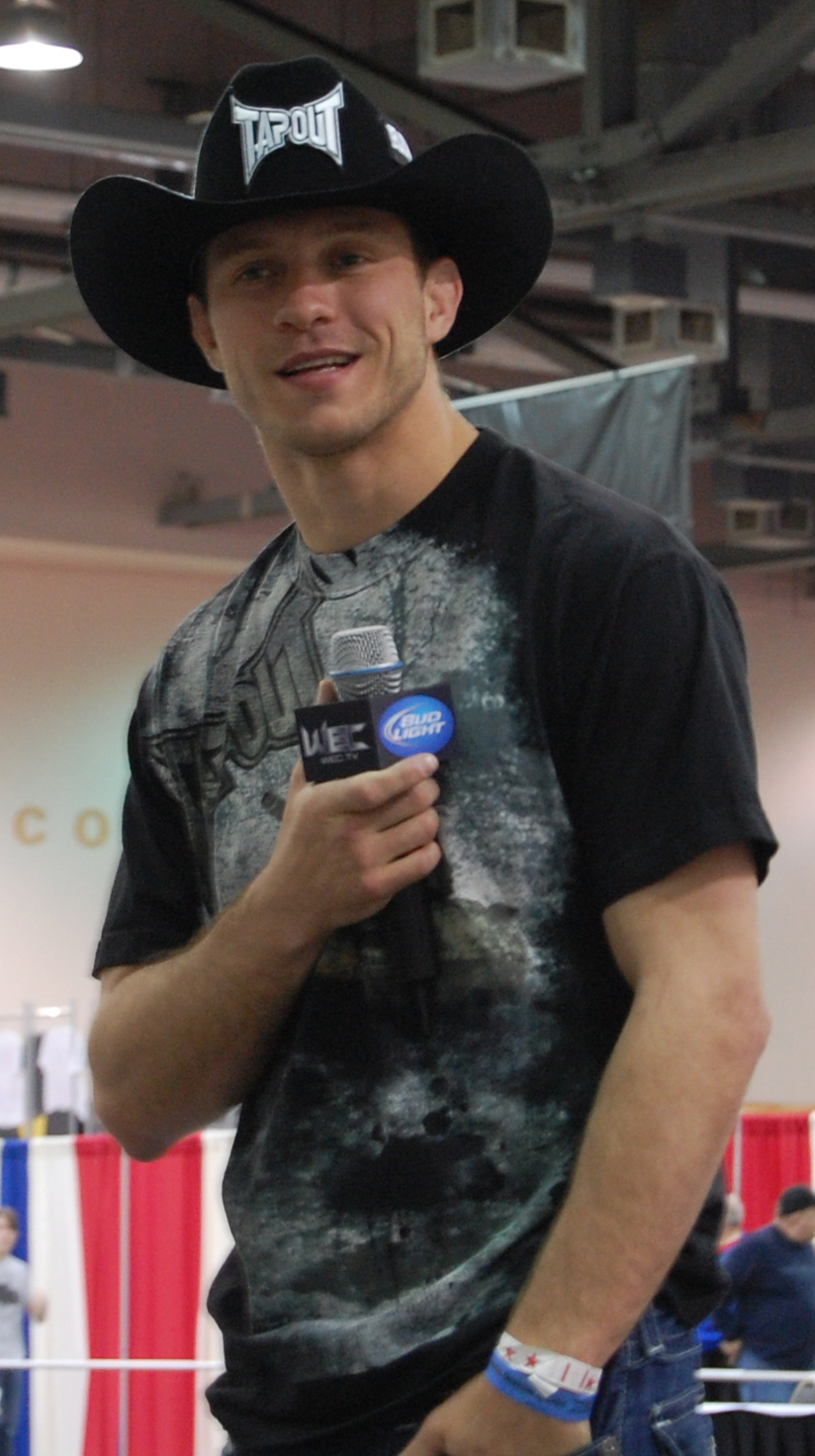 2009 at WEC 45, Donald “Cowboy” Cerrone headlined in a non-title fight, against Ed Ratcliff, there were only 1,700 fans in attendance, and yet, Cerrone made that fight feel larger than life. He and Ratcliff went to war for the screaming audience. Even though it was a small event every fan that night got a show they were happy to pay for. This is the legacy of Cowboy Cerrone. He’s a man who likes fighting and wants to put on a show. “I don’t care where I fight on the card, but to get people motivated or excited, like, ‘Cowboy’s fighting!’ that’s my overall goal.” Even if damages him. He never won a major title and yet holds one of the largest followings in the sport.

“I didn’t really have intentions of fighting in MMA; it just kind of fell into place. Once I started fighting, though, I loved it.“

Donald “Cowboy” Cerrone began his career fighting in the WEC. It was a match made in heaven. The WEC was targeting smaller weight classes with a smaller cage in an effort to push the action. Cerrone was a standup focused fighter, Muay Thai based, with a great knowledge of Jiu-jitsu. The WEC and Cerrone worked incredibly well together. Even today, a decade on from the end of the WEC, many people still largely recognize him for his fights in the organization. And for good reason.

Cowboy Cerrone cut his teeth in the WEC and every fight out he was willing to go to war. He fought standout fighters such as Benson Henderson, future UFC champion, Jamie Varner, James Krause, Chris Horodecki, and others. Even though he never won a major title within the organization he left a major mark in the WEC.

Out of his ten appearances in the WEC he won fight of the night honors in five of them. In fact, he got fight of the year 2009 in his title shot against Benson Henderson, according to Sherdog, Sports Illustrated, and MMAFighting.com. This bout was a back and forth memorable war. Here is the play-by-play of just the last few minutes of this fight of the year, “Cerrone looks fresher at this point, with 3:30 to go. Henderson misses a left to the body and loses his balance. Cerrone engages him on the ground, but Henderson rolls out and reverses, though Cerrone immediately tries an omoplata from his back. Cerrone then goes to a triangle and an armbar. Henderson escapes the armbar but falls back into an omoplata. The attempt doesn’t finish Henderson, but it controls him. Cerrone then torques a kimura. Henderson escapes again and struggles for a double against the cage. Cerrone goes to his back and immediately returns to the triangle choke and then an omoplata to a straight armbar as the bell rings.”

“If you’re in the UFC, you’re one of the baddest dudes around.“

The man fought frequently and would fight anyone. Between his times at welterweight and lightweight, he’s fought in the UFC for 37 bouts in his ten years with the organization. That’s averaging more than three fights per year. “You don’t have to get ready if you stay ready, alright? I’m always in the gym, always training, all the time.“

His coach John Wood said of the man, “He’s game, man,” He told MMA Fighting, “I don’t think there’s anyone more in the sport that’s ready to fight whenever you make the phone call. If you told him he had to drive out there tomorrow to do it, he would. He’s just that kind of guy.”

In his home state of Colorado, the UFC celebrated its 25th anniversary. Cerrone picked up an armbar victory against Mike Perry at this event. Even though Cerrone wasn’t the main event, he made it seem like he was. The crowd loved and celebrated him. The submission “Brought the announced crowd of 11,426 into rapture.” According to the Denver Post in 2018.

“I live a wild and crazy life.“

Donald “Cowboy” Cerrone always lives up to his name. He’s a man who lives on a ranch, snowboards, ATVs, hunts, rock climbs, snowmobiles, among many other activities. But he’s also a man who remembers where he comes from.

He was raised in Colorado by his grandparents. The man even picked up a win after his grandfather had passed at UFC 126. Cerrone’s grandfather, “Who had been instrumental in his pursuit of a fighting career and been to all of his grandson’s fights, had fallen ill and was in the hospital in the time leading up to this bout,” UFC.com reported, “As Cerrone started making the walk to the Octagon, his friend and teammate Leonard Garcia was on FaceTime with Cerrone’s family back home in Denver when “Cowboy” saw his friend’s face drop. His grandfather had passed. With a heavy heart, Cerrone crossed the threshold into the Octagon for the first time and picked up the first of his 23 victories to date. And if you wanted to know just how big a part of his life his family is, understand that Grandma Jerry might be even more beloved within the MMA community than her grandson, and remains a constant presence at every one of his fights.”

Here is Donald with his Grandma

Donald “Cowboy” Cerrone is hugely celebrated and beloved in the MMA community because of his great fights and great wars he’s been through. His losses, though, are often brutal. He may hold the most wins in UFC history but he is also a record holder of one of the top fight losses in UFC history.

Cerrone absorbed 238 significant strikes in his 2011 loss to Nate Diaz. UFC Champions Anthony Pettis, Conor McGregor, Justin Gaethje & Rafael dos Anjos knocked him out in the first round. Additionally, Leon Edwards, Darren Till, Robbie Lawler, & Jorge Masvidal, all battered the man with many strikes. As much as Cerrone could win in exciting, emphatic fashion his losses were brutal and savage.

“It’s just a rough day in the office,” Cerrone told ESPN after his most recent fight. “This game can get changed, all it takes is one big shot. He hit me with a good one, set me back. Hit me with another one.” Cerrone, like many fighters, are too tough for their own health. Fighters love fighting, and they want to continue at all costs. “The only thing I can do is fight,”