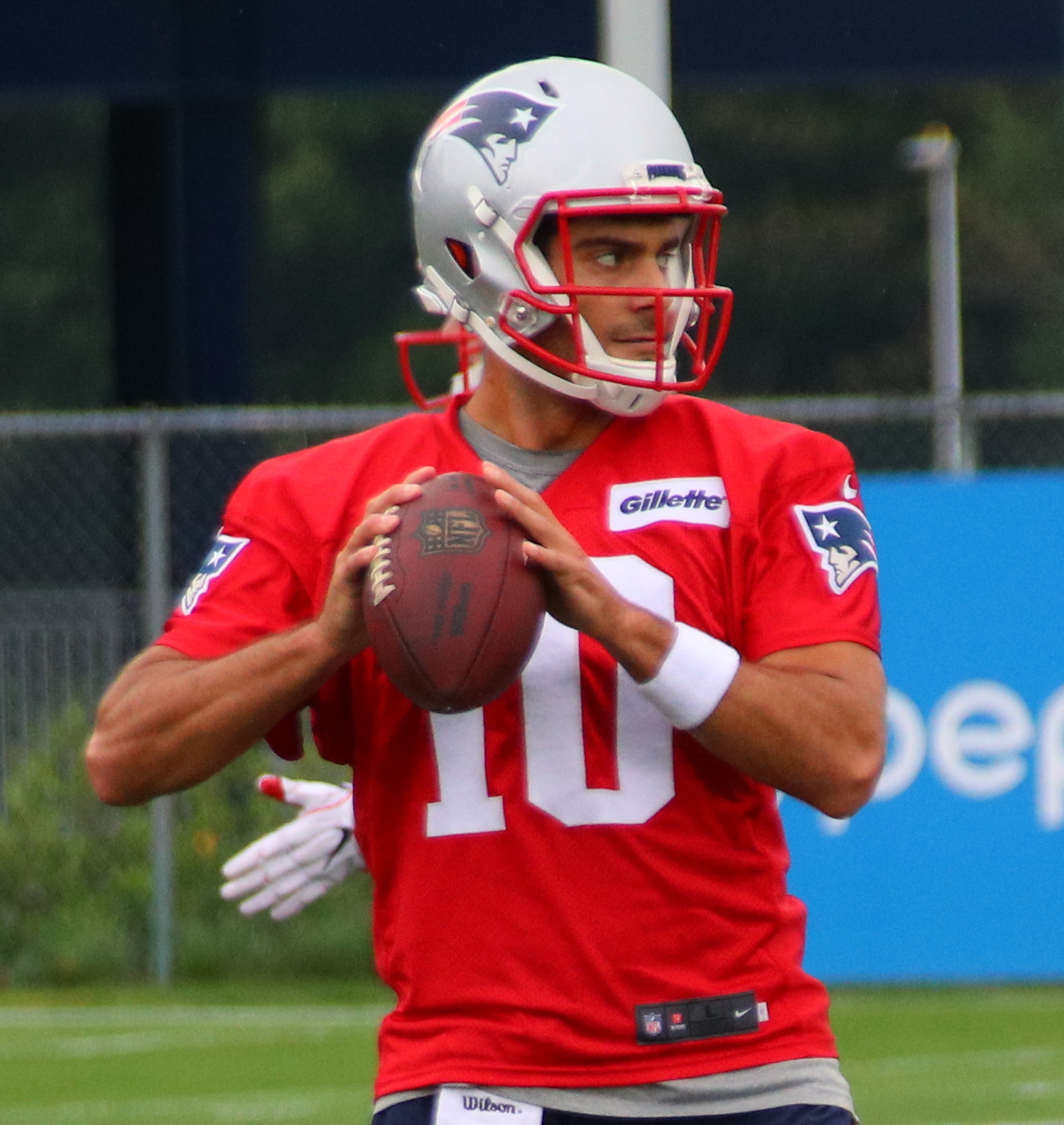 "File:Jimmy Garoppolo PATS2017 (cropped).jpg" by eltiempo10 is licensed under CC BY 2.0

During the 2020 offseason, Tom Brady’s departure from New England changed the landscape of the National Football League. While most NFL fans acknowledged Bill Bellichick’s coaching prowess, Brady’s farewell caused the Patriots to change the direction of their franchise. What was once the only dynasty of the 21st century quickly became a re-tooling mission. The Covid opt-outs, specifically Dont’a Hightower and Marcus Cannon, hurt the Patriots’ chances before week one even kicked off. That said, the ultimate demise of New England last season came from their lack of success and stability at the quarterback position. Cam Newton looked promising during the few games before he contracted Covid, but he played like a shell of his former self once he returned.

New England re-signed Newton to an incentive-laden one-year deal as insurance. During the 2021 NFL draft, they selected Alabama-product Mac Jones with the 15th pick as the 5th quarterback off the board. Going forward, Jones will be given a shot to prove himself worthy of the throne which Brady once helmed. However, the Patriots can also look for more proven options soon to maximize their current winning window.

Watson’s legal situation is on the backburner of the current NFL news cycle, and there are certainly backroom conversations occurring between front offices. Watson and his accusers will likely reach settlements, and the league may suspend him for up to one season. Reports from Houston Chronicle’s John McClain signal that Watson will not suit up for the Texans again. When on the field, Watson is a top 8 quarterback that can elevate his surrounding talent. Placing Watson behind the Patriots’ stellar offensive line and competent weapons group would lead to a dynamic offense. Paired with an above-average defense, a Watson-led Patriots team would be a super bowl threat from the Get-go. An offer for Watson would require a combination of starting-caliber talent and a plethora of draft capital, so it might be wise to explore more affordable options at the quarterback position.

Bill Belichick already has a relationship with Jimmy G dating back to 2014. During the second round, the Patriots drafted Garoppolo as a potential successor to Tom Brady. Towards the end of Garoppolo’s rookie deal, it became clear that Brady was not going anywhere. The 49ers sent a second-round pick back to New England for the quarterback. As of today, the 49ers have their potential franchise quarterback in South Dakota State’s Trey Lance. After June 1st, The team can cut Jimmy and save 25 million dollars towards their 2021 salary cap. The 49ers could use those savings to re-sign Richard Sherman and add other free agents.

Belichick knows that with a good supporting cast, Garoppolo can bring a team deep into the postseason. If the Patriots are not content with their current QB room, they could acquire Garropollo for nothing more than a day three draft pick and restructure his contract as part of the trade. While Jimmy Garoppolo would not elevate the Patriots to super bowl contender status, he would provide more insurance.

The Shot in the Dark: Jordan Love

The current Packers quarterback situation is not one many other teams would envy given the turmoil. However, there is going to be some shakeup in Green Bay this offseason, whether it be in the front office or on the roster. If Aaron Rodgers is on the move, he will not want to go to an organization like New England. However, if Rodgers stays in Wisconsin, Jordan Love could be on the move. The 2020 first-round pick, dubbed a project since his selection, could be a developmental piece for the Patriots. Love’s arm strength is undeniable, though there is much to be desired in almost every other aspect of his game. If Love sits on the bench and learns from Cam Newton in year one, there is a chance the Patriots select him as their future. Given the unusual circumstance surrounding Jordan Love, a trade package is difficult to nail down, though a package would likely center around a day two draft pick.