3 overrated and 3 underrated offseason moves by the Buffalo Bills 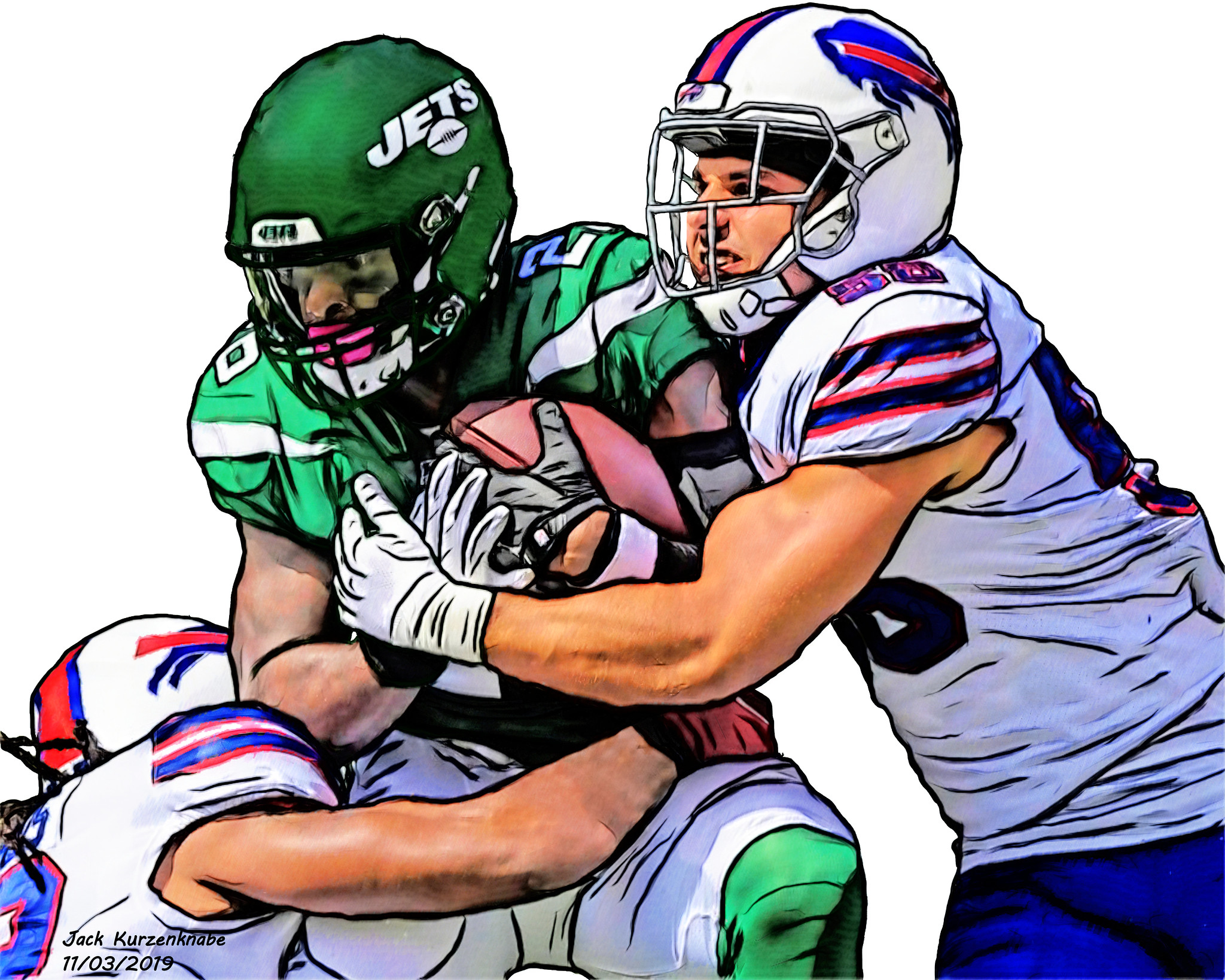 The Buffalo Bills entered the 2021 offseason knowing that they are closer to the Super Bowl than they have been the whole 21st century. After falling to the Kansas City Chiefs in the AFC Championship game Buffalo looks to build even more for the 2021 season. Under head coach Sean McDermott, offensive coordinator Brian Daboll, and young star quarterback Josh Allen the Buffalo Bills have made huge progress each season together. The next step for Buffalo is to the Super Bowl. Going from a perennial non-contender to a contender is what the past three seasons were for. Now, Buffalo is attempting to move from perennial contender to champions. This offseason is so important to Buffalo because it will help decide if Buffalo can continue this high level of growth. This offseason has not been as exciting as the 2020 offseason where general manager Brandon Beane pulled off a blockbuster trade for star receiver Stefon Diggs. Regardless, this offseason remains important to the success and future of the Buffalo Bills. Here are the most overrated and underrated moves of the 2021 offseason by general manager Brandon Beane.

During the season a hot topic of conversation was how Buffalo was going to retain linebacker Matt Milano and right tackle Daryl Williams. Many analysts and fans believed that retaining one of Milano and Williams was the Bill’s only option. However, Brandon Beane pulled off what everyone thought was impossible. Beane was able to sign Williams and Milano to very team-friendly deals to keep them in Buffalo for at least the next three seasons. While their deals were very friendly for the team both players also now are compensated justly for their play. Williams was signed to a one-year prove-it style deal coming off a poor season and played like one of the best right tackles in the AFC for Buffalo. Milano is arguably the Bill’s best defender in the front 7 and makes a huge impact when he is healthy.

One thing that is so underrated about these deals is that Buffalo never had to use the franchise tag and defer these contracts to next year where the price of both players may have inflated just like the salary cap. In addition to that, Beane now has elite-level players at left tackle, right tackle, cornerback, linebacker, and wide receiver all under contract for at least three more seasons. One thing Beane wanted to do when he came to Buffalo was draft, develop and resign. While Williams is more of a free agent gem Milano is the perfect example of what Beane wants to do. A former 5th round pick Milano developed into one of the league’s best overall linebackers and Beane was able to keep him in Buffalo for more than just a rookie deal. Something that many general managers before him failed to do.

The move of restructuring Mario Addison is not the really overrated thing. It’s not the move itself but more of the fact that this was the move instead of cutting him outright. While Addison did lead the Bills with 5 sacks in 2021, he was very disappointing considering his salary and hype before the season. The Bills should have cut Addison just because of the pure number of pass rushers they brought in this offseason. In the draft, Buffalo added pass rushers in rounds 1 and 2 as well as signing Efe Obada who had 5.5 sacks while playing nearly half the number of snaps as Addison.

Cutting Addison would have been a better move for Buffalo as it would have saved the team just over six million dollars on this season’s salary cap. Cap space that could later be used on free agents. While at the time of Addison’s restructure it seemed like a good deal since then Buffalo has added three pass rushers who all have higher potential than Addison. Addison will have to fight for his role on the team and could be a veteran cut candidate considering the amount of young talent Buffalo now has at the position. If Addison gets cut Beane likely will regret letting him stay for the summer when instead his cap space could have been used at the height of free agency.

Underrated: Drafting Defensive Ends in Round 1 & 2

The Buffalo Bills pass rush was not that effective last season. Combine that with the type of damage that the Tampa Bay Buccaneers were able to do against the Kansas City Chiefs in the Super Bowl with their pass rush. You get Brandon Beane’s understanding that the Bills need a better pass rush. Buffalo is great in the secondary and even has very talented linebackers. The defensive line is more of a project. Beane addressed that significantly by drafting defensive ends in the first and second rounds. Gregory Rousseau and Carlos Basham look to come into Buffalo and infuse the defensive line with some young energy and high potential. This move seems like a weird one at first considering teams usually do not draft the same position back-to-back that early in the draft. What makes these picks so interesting is the versatility of both players. While both are defensive ends first, we could see them all over the Bills line.

This tactic is slightly genius by Brandon Beane. Buffalo already has key young stars at every position group except for the defensive line. Add that with the fact that the franchise quarterback is about to paid and the two next highest-paid positions in left tackle and cornerback already have elite players who are being paid a significant amount of money having not one but two defensive ends on rookie deals for the next four seasons could be a game-changer. While Basham and Rousseau are different styles of defensive ends both have really high potential in their own unique ways. If Buffalo can get one elite defensive or even just two really good ends from this tactic it will be a game-changer for the years coming forward. This move may not pay off instantly but in three seasons it could be the move that made Buffalo a championship-caliber.

Using a similar tactic to his first two rounds of the draft Brandon Beane doubled up on tackles right after defensive ends. While you would think that you can use the same theory for defensive ends here it does not quite work. It doesn’t work because Buffalo has a left tackle and right tackle both under contract for the next three seasons and both are so good that their jobs are untouchable. That means that both Spencer Brown and Tommy Doyle will spend most of their time on the bench for the next three seasons. While either could see some spot action if someone gets hurt, they both are strictly tackles with little to no position flexibility.

While you can never have enough good lineman, this drafting tactic works more when it is at a position of need as opposed to a position of strength. The Bills are strongest at tackle along the offensive line so it is slightly redundant that Beane not only drafted one but two players who likely will sit for a while instead of attempting to improve other areas of the team that may have weaker players or depth.

A punter? Yes, a punter is an underrated signing. First, letting Corey Bojorquez walk was a smart yet difficult thing for the Bills to do. Bojorquez has one of the biggest legs in the league and was open to flip the field several times for Buffalo even ending up second the whole league in yards per punt. However, letting Bojorquez was smart for Buffalo because they do not need to flip the field often because of how good their offense is. It still is hard to see a powerful leg like Bojorquez leave the Bills after such a good season. However, what leaves in power now comes to Buffalo in a different form. Finesse. Matt Haack is essentially the opposite style of punter as Bojorquez. While Bojorquez will boom the ball down the field full-strength every time Haack likes to hang the ball super high in the air with precise accuracy.

The swap of punters may look like nothing to the outside fan. But Matt Haack and his ability to be so precise and accurate punting the Ball will help the Bills so much in 2021. Haack tied for the second-lowest touchback rate at 2.9% which will replace Bojorquez’s rate of 15.4% which landed him last place leaguewide. The reason why this move will be so beneficial for Buffalo will be because due to their offensive ability they will punt around the 50-yard line much more often than close to their own end zone. Haack gives the Bills a weapon when it comes to pinning teams with bad field position. While Buffalo may not be able to reverse fields as easily signing Haack makes Buffalo considerably better at controlling field position.

While there were several signings of offensive lineman in the offseason none of them are big impact type players. Buffalo did not necessarily need a superstar at guard or center but a player who can be a top 20 player at either position would have helped the Bills. Instead, Brandon Beane opted to sign several depth options who likely will find their way back to free agency or a practice squad. None of these signings were bad because of how little the Bills are tied financially but with Buffalo recently opening up extra cap space by converting Stefon Diggs salary to a signing bonus it is confusing why this was maybe not done earlier by Beane to go after better lineman.

The offensive line is not a huge weakness for Buffalo but after seeing how Cody Ford, Ike Boettger, and Mitch Morse played in 2020 other options need to be explored. None of those players are bad but none of them give you major confidence when they play either. The best signing that Beane made was Forrest Lamp who is a former high draft choice that played some solid years for the Los Angeles Chargers. The rest of the offensive line signings by Beane likely will not even make the team. On the surface, depth signings are low risk and are done by every general manager. What makes these signings overrated is that they do not make the 2021 Buffalo Bills any better and make them essentially meaningless offseason paperwork.

While all of this is written before the season starts a good portion of this article will be relevant as the season goes on. Just because a move is overrated does not mean that it still provides value to the Bills. Same goes for underrated signings. Just because a signing may be underrated does not mean that those players will play above their skill levels. Regardless, Brandon Beane had a very good offseason for the Bills. The Bills were able to retain all their important talent while added a large number of young players who have really solid high potential. In addition to the quality signings that Beane has made he has kept the coaching staff intact and kept the Buffalo Bills out of and tough salary cap implications.