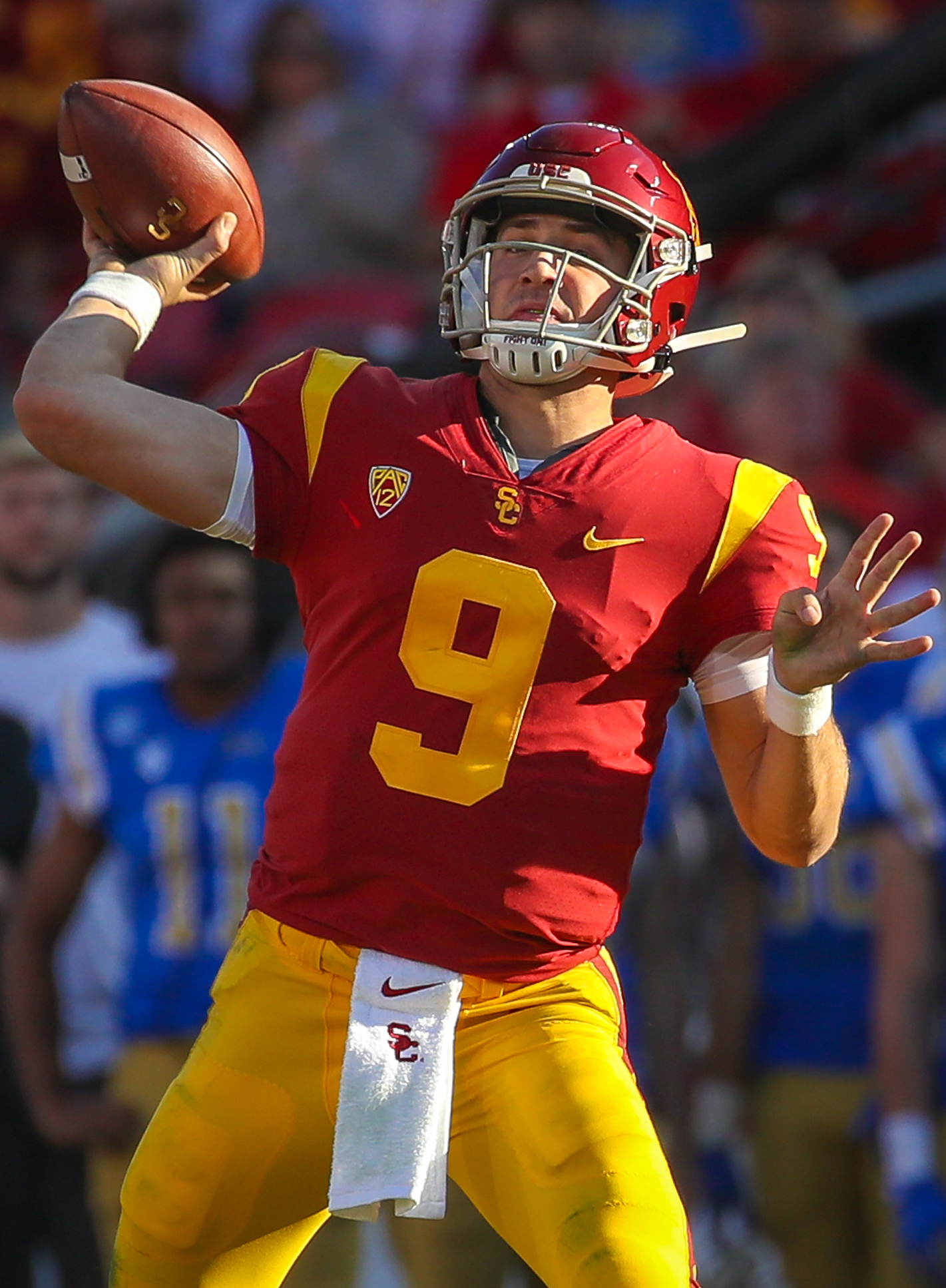 The 2022 NFL regular season is still months away, and every team is holding out hope that they can make a playoff push this year. For most of the mediocre teams, the playoffs are not a reality. About halfway through the season teams will be evaluating their young talent and projecting which players will be their long term, due to their season not panning out as they had hoped.

Just to get a head start, I have projected which teams will be picking in the top 10 in the 2022 NFL Draft. It is never too early for a mock draft, and there are superstars on the horizon that can change the future of a franchise. Here is the 2022 NFL mock draft for the first 10 selections.

The uncertainty surrounding Deshaun Watson is looming over the Texans front office. He requested a trade, but now with all of the legal issues that he is facing, it is unclear what his future is in the NFL. This will force the Texans to draft a new franchise QB, and they should be in a prime position to do so after a tumultuous offseason. Spencer Rattler is deadly accurate and completed 67.5% of his passes in his first year as a starter. His mobility makes him an intriguing prospect and he is poised for a potential Heisman winning season at Oklahoma. If Rattler continues to grow as a leader, he could be just what the Texans need to inject life back into the organization.

The Lions will experiment with Jarred Goff under center after shipping Matthew Stafford to the Los Angeles Rams. Goff’s success was in large part due to the coaching staff and talent surrounding him, which he simply does not have in Detroit. The Lions will likely be on the market for a QB after this season, and Kedon Slovis is a perfect fit. Slovis will be starting for the third consecutive season, and he has grown dramatically in each of his first two seasons. In 18 career games thus far, he’s completed 70% of his passes for 5,423 yards and 47 touchdowns. His accuracy and arm strength will make him one of the most sought-after QBs in the draft. If he can put together another year of excellent tape, this pick is a no-brainer for an organization that needs some hope.

This pick will be contingent on how successful Jalen Hurts is in his first full year as the starting QB. Assuming that Hurts struggles, the Eagles will be on the hunt for another franchise QB. Sam Howell is the third-best QB in this draft class, but he has tremendous upside. He has been the starting QB since he arrived on campus at North Carolina, and in just 25 games, he has thrown for 68 touchdowns, rushed for seven touchdowns, and thrown only 14 interceptions. The Eagles have plenty of holes on their roster, but addressing the QB position is the most important aspect of becoming a winning team in the NFL, and the Eagles should do just that.

The Jets new head coach, Robert Saleh, loves defense and dominant pass rushers. After signing Carl Lawson in free agency, they could still use another pass rusher to pair with him. Thibodeaux is head and shoulders above any other defensive end in this draft and is arguably the best overall player in this draft. Due to the other teams picking ahead of the Jets desperately needing a QB, they could hit the jackpot with this pick if Thibodeaux falls to them. He has freakish athleticism and strength that will translate immediately at the next level. His freshman season he was a humiliating opposing offensive lineman, and he finished with nine sacks on the year. He should be the next star pass rusher and the Jets defense will be a force if they can land him.

The Jaguars new priority after addressing QB in the 2021 NFL Draft, will be protecting the #1 overall pick Trevor Lawrence. They have some talented offensive lineman in place but Kenyon Green would be a huge boost to their line. Green can play all over the line and should be a starter from day one. He could start at either guard position when he arrives but he has the size and talent to transition to either tackle spot if they need him to. These are the type of versatile players that the Jaguars need to draft to ensure Lawrence stays upright for the foreseeable future.

This year could be Matt Ryan’s last season with the Falcons, and they will need to address QB in next year’s draft. Malik Willis is from Atlanta and would be a hometown favorite as soon as he gets drafted. He is easily the most mobile and elusive QB in the draft, but also has great touch and accuracy when throwing the ball down the field. Last season at Liberty he threw for 20 touchdowns and rushed for 14 touchdowns. He averaged 8.5 yards per completion and 6.7 yards per carry. He is dynamic in the open field and has a straight-line speed that is comparable to Lamar Jackson. Willis would be an excellent fit as the Falcons attempt to get younger and build for the future.

Aaron Rodgers and the Packers relationship is fractured beyond repair, but if they feel confident in Jordan Love moving forward, they need to draft a weapon for him. It’s quite ironic because that is part of the reason Rodgers is frustrated with the Packers because they have been reluctant to spend first-round picks on skill positions. Regardless, Justyn Ross is a can’t miss prospect and the Packers could pair him with Davante Adams to have one of the most lethal WR duos in the NFL. Ross would be an excellent complement to Adams because of his size and ability to high point the ball. Love would be set up for success with such dynamic WRs, if Rodgers does end up leaving Green Bay.

The Raiders have struck out the year in and year out trying to address their horrid secondary. They have spent numerous first-round picks on defensive backs that have yet to pan out. Luckily for them, Derek Stingley Jr. is undoubtedly the best defensive back in the draft and could have been a top ten pick in the 2021 NFL Draft if he were eligible. Stingley is a ball hawk and grabbed six interceptions as a true freshman. He is extremely physical and has the size and speed to become one of the best cover corners in the NFL. He does not shy away from tackling bigger receivers, and he could finally turn the Raiders defense around once and for all.

The Panthers are extremely young and have multiple needs that they need to address. After trading for Sam Darnold, they need to bolster their offensive line to make sure he doesn’t encounter the same issues he had with the Jets. Zion Nelson is arguably the best tackle in this draft class, and he could be the anchor at left tackle that the Panthers desperately need. At 6’5 and 312 pounds, he needs to continue to put on weight and build muscle, but he is already tenacious. He already has excellent footwork and quickness that will be extremely beneficial in his development.

The Bengals should be much improved this season if Joe Burrow can stay healthy. Depending on how their offensive line holds up, they could go with the best available offensive lineman, but their defensive line is as big of an issue. After having the worst pass rush in the NFL in 2020, they signed Trey Hendrickson to replace Carl Lawson, but that was their only big singing on that side of the ball. That should not deter them from continuing to build their defensive line by adding another excellent pass rusher. Drake Jackson has great versatility and can play all over the defensive line. He recorded 5.5 sacks in his lone year as a starter and showed flashes of becoming a force on that side of the ball. The Bengals need another lineman with Jackson’s combination of strength and quickness, so they should not hesitate to select Jackson if he is on the board.

Why the Chargers have a bright future with Justin Herbert
3 sleeper WRs for redraft
wpDiscuz
0
0
Would love your thoughts, please comment.x
()
x
| Reply