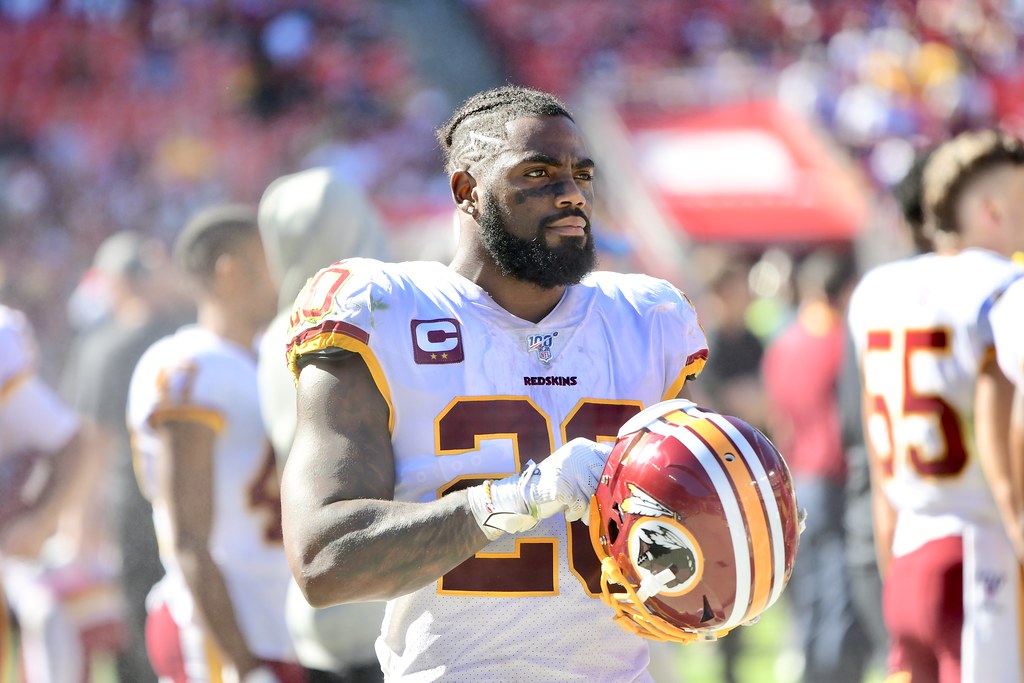 Landon Collins needs to prove himself in Washington next season

Three players for the team wearing Burgundy and Gold are going to have to use this upcoming season to show they deserve to be apart of the organization. One player is coming off a season-ending injury suffered last year; one is going into his third year with more uncertainty at his position; and the last is literally playing this season on a one year “prove it” deal.

In the words of Ricky Ricardo “Lucy, you got some splainin’ to do!”

The Washington Football Team did a little bit more than just improve the back end of the defense. They damn near reshaped the whole thing. Jack Del Rio and Co. drafted a safety, signed Bobby McCain who has major experience as the position, and already has second year standout Kamren Curl, who has planted his foot firmly into the stater discussion.

With all of the new faces in town, that leaves Landon Collins on the outside looking in so to speak.

Landon Collins is about to start the third year of his six year – 84 million dollar contract he inked at the beginning of the 2019 season. During his first year, he logged two games with double digit tackles, one being in the team’s first win of the season against the Miami Dolphins, totaling 12 tackles. Collins ended the season with a total of 110 tackles in 15 games.

Clearly this overall performance helped back up his monstrous deal he just signed. Then came the 2020 season, which everyone knows was plagued by the pandemic, where Collins season came to an abrupt end. The former Pro Bowler left Week 7 with a season ending injury of a torn achilles.

Prior to his setback, there were a lot of rumblings and concern going around about Collins ability to tackle. He was questioned about said topic, but denied that it seemed to be a problem. In a virtual interview held by local media, this was his response to his missing tackles allegations.

Once Collins went down for the season, rookie 7th rounder safety Kamren Curl was inserted and ended up being a solid replacement. So solid that some experts had Curl in major discussion of Defensive Rookie of the Year. This year rookie safety Darrick Forrest is already making plays during offseason activities, and Bobby McCain is there on a one year deal, which includes a chip on his shoulder to ball out.

Landon Collins, coming off a serious injury, needs to do whatever he did in 2019 and then some this year if he wants to show Ron Rivera and the rest of the organization that he is worth the super lucrative contract signed just three years ago.

Steven Sims Jr. Is going into his third year with the Washington Football Team with probably, if not the most pressure of anyone at any position on the team. That’s because Rivera brought in his old pal Curtis Samuel, who can easily play the slot role if asked to due to his versatility. He also brought in a viable slot target that newly acquired quarterback Ryan Fitzpatrick favorites, Adam Humphries. Humphries has played with Fitzmagic previously with the Tennessee Titans, so there’s an obvious connection.

The undrafted third year wideout is looking to fit in the slot role on this offense. His rookie year play as kick and punt returner is where he got the most attention, being super shifty and having the speed to break a long return. Sims Jr. had 32 kick returns totaling near 1000 yards and one touchdown, with just one fumble via a punt return. At the receiver spot, he caught four touchdowns and even rushed 9 times for nearly 100 yards and one touchdown. In the 2020 season, his catches and total yards dropped and he only caught one touchdown. Sims Jr. totaled FIVE fumbles on 24 punt returns. That just simply cant happen, and fumbles create distrust between players and coaches.

The Football Team also drafted Dax Milne from BYU, who is looking to make the squad as a possible kick and punt returner if there is no real room for him as a starting wideout. Steven Sims Jr., the heat is on.

A new gunslinger has arrived in the Nation’s Capital, a la Ryan Fitzpatrick. This will be his 9th team in the league he has suited up for. He comes in having signed a one year/10 million dollar contract. Why in the world is Ryan Fitzpatrick a starting quarterback for a new playoff team in 2021? Because he is fearless, he is very smart, and he’s got the intangibles and the heart to never give up. All of the traits and the impressive stats over the past few seasons, seem to be what Ron Rivera is looking for when it comes to choosing his point guard.

Last season, Fitzpatrick only started 7 games out of the 9 he appeared in. There is one stat provided by Next Gen Stats that sticks out that is believe to have helped solidify his role with The Football Team. Out of all the quarterbacks that perform under pressure, Ryan Fitzpatrick is number one. That’s right, 38 year old Harvard graduate led the entire league last year with a passer rating of 98.6, and a 62.1 completion percentage. This “under pressure” statistic doesn’t solely fall on the quarterback’s shoulders. It can stem from playing behind a bad offensive line, extending the play or maybe holding onto the pigskin longer than allocated.

The numbers may look appealing, but what you don’t see in between those lines are the chances Fitzpatrick takes. He’s known for his “IDGAF” style of play, making him a possible hero, or a possible villain for his team. This acquisition makes things a little more clear and comfortable for Rivera and his staff for the quarterback position, especially coming after the circus show at the spot last season.

After OTAs and minicamp, it was reported Taylor Heineicke has made a real push for the starting spot, causing true competition hype slated for training camp in late July.

iHe may not be the most athletic or accurate quarterback in the league, but he has more than enough experience in true leadership, and he’s willing to put everything on the line in order for his guys to excel on and off the field.

If Fitzpatrick has playmakers surrounding him on his side of the ball, and a dominant defense behind him, there is no reason The Washington Football Team shouldn’t find success in 2021 and beyond.