Why the Steelers should really trade up for Kavyon Thibodeaux 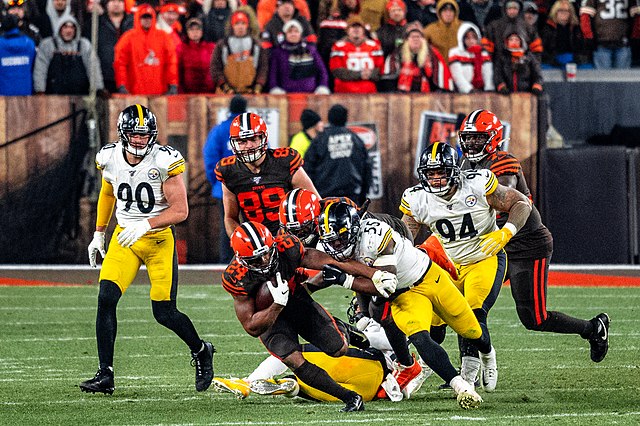 The Steelers should prioritize Kavyon Thibodeaux

The Pittsburgh Steelers featured the 2021 Defensive Player of The Year T.J. Watt. What if the Steelers brought in Kavyon Thibodeaux, who recently clocked a 4.65, to play next to Watt and Cameron Heyward? I believe the AFC conference that features so many prominent quarterbacks like Joe Burrow, Patrick Mahomes, Justin Herbert, and Josh Allen, would be scared at that sight.

The draft pick of Kavyon wouldn’t only be exciting because he has an elite grade and he could play next to Watt, but the Steelers could also cut Stephon Tuitt, who carries a $13.9 million cap hit. The Steelers led the league in sacks last season, but the expensive Tuitt played a mere zero games. Kavyon would be a monster replacement for Tuitt.

I also would like to see the Steelers priorize signing a QB like Marcus Mariota or even Tyrod Taylor to compete with Mason Rudolph and Dwayne Haskins. Mariota can certainly be an upgrade over the 2021 version of Ben Roethlisberger, especially with the weapons he will have in Chase Claypool, Dionate Johnson, and Najee Harris. Tomlin has also stated that he wants an athletic QB.

The Steelers have been favored to trade up to select a QB like Sam Howell or Malik Willis. Instead, they should trade up to select a defensive player that can shake the NFL in a way that Micah Parsons did in 2021. Kavyon is a gifted DE that can chase down RBs and beat pass blockers with strength. He would have incredible matchups with Watt and Heyward on the defensive front, too. We witnessed the LA Rams win the Super Bowl largely because of Aaron Donald and Von Miller demolishing offenses side by side.

Kavyon reminds me a lot of Marcus Davenport of the New Orleans Saints. Davenport was one of the best edge rushers per snap in 2021, but injuries haunted him. Kavyon also has the rare power that Myles Garrett displays on the Browns. If Kavyon has the production of Garrett early in his career, they could unleash a defense similar to the Legion of Boom or the Von Miller-led defense in 2015.

It might be dreamy to imagine a QB like Malik Willis as the next Lamar Jackson or Russell Wilson, but it not be the best choice for the Steelers. I believe that a rookie QB will also take more time to develop at the pro level than Kavyon. The Steelers might have lost Big Ben, but that shouldn’t disguise the fact that the Steelers are built to “win now”. They can get the gold with their defense leading the charge. The Bucs defense stifled Patrick Mahomes in Super Bowl LV and the Rams lit up Joe Burrow in Super Bowl LVI.

Watt and Heyward in their prime, while their offense has many weapons content together at the moment. They should add a talented QB that can take care of the football like Mariota in free agency, while they address a “need” position by inking a profile that’s listed as the fourth best overall draft profile by Pro Football Focus and best overall prospect by CBS Sports.