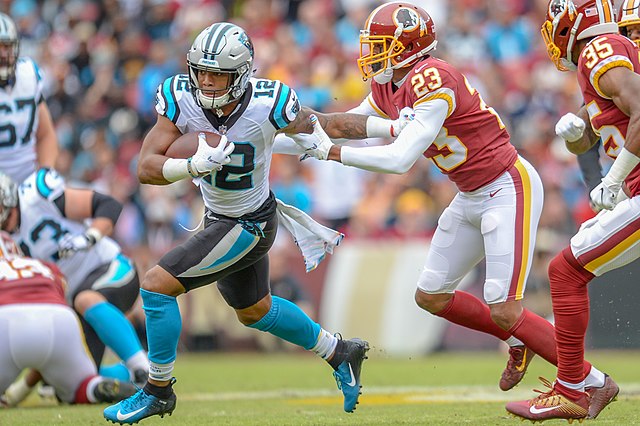 The Carolina Panthers have a quarterback in Sam Darnold that is somewhat deservedly virtually sacrificed on Twitter, but they have an impressive wide receiver duo in D.J. Moore and Robby Anderson. Moore is coming off his third straight 1,000+ yard season – as he also has 87 receptions and 93 receptions in two of his past three seasons. Moore had an impressive 76.9 grade by PFF last season.

Anderson may not be as productive or popular (in recent memory) as Moore, but he is still a very explosive WR. The former Jets wideout had a career-high 1,096 yards in 2020 and then took a dip in receiving yards last season (519 yds). Although, he recorded 5 touchdowns a season ago. Anderson is talented, but he has been a bit confusing as of late. He tweeted that he was contemplating retirement two weeks ago – which may make some Panthers fans less excited about his future and fit in CAR.

Terrace Marshall Jr. and Rashard Higgins are also expected to be productive WRs in the Panthers offense moving forward. Marshall was a second-round pick in 2021 and he could be a key reason for the growth or down-fall from Darnold in 2022. Higgins was also a strong under-the-radar addition to the Panthers offense this off-season. He nicely had 37 receptions and 599 receiving yards in 13 games in 2020. It’s safe to say that he has a lot of upside as a WR4. The fifth WR on the Panthers is primed to be Brandon Zylstra ( Concordia College) – who had 250 yds in 2021.

The Panthers passing attack will certainly blossom from a motivated Darnold. Yet, the Panthers QB1 should feel more confident with a more superb WR3 and WR4 in his line-up. Also – let’s not forget about a healthy CMAC in the receiving game.