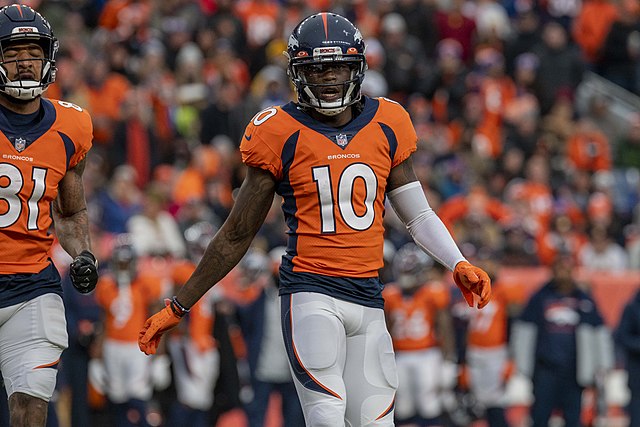 What is the Broncos wide receiver outlook?

The Denver Broncos have their veteran wide receiver Courtland Sutton, the third-year WR Jerry Jeudy, and the underrated Tim Patrick. Sutton recorded 72 receptions, 1,112 receiving yards, and six touchdown receptions in 2019 – as he earned a Pro Bowl nod. Unfortunately, he suffered a torn ACL and missed 15 games in 2020. Sutton returned healthy and reliable in 2021, but he wasn’t an impressive WR with 776 yards and 2 touchdowns (with a mediocre QB display by Teddy Bridgewater and Drew Lock in three games).

Sutton will certainly expect Jeudy to be a rock-star WR that could potentially outplay him, despite the Bama WR having a sophomore slump (467 yards and 0 TDs). Jon Heath of Broncos Wire believes Wilson-Jeudy is the second-best new QB-WR duo. Perhaps Jeudy’s superb deep route running can finally be utilized to its fullest ability with Russell Wilson.

Outside of the big two WRs in Denver, the Broncos will anticipate play-making ability from the very underrated Tim Patrick. The Broncos WR3 quietly has 730+ yards in each of the past two seasons. Conor Orr from Sports Illustrated pegged Patrick as the most underrated player on the Broncos. Orr believes that Patrick’s early chemistry with Wilson is inspiring for the future.

After the Broncos big three weapons at WR, they have KJ Hamler and Kendall Hinton. Of course, Hamler played in only three games last season – as he tore his ACL. Hamler recorded 30 receptions and 381 yds in his rookie season. Hinton had 175 yds and 15 receptions last season. Let’s not forget about a key non-WR-catching weapon in Noah Fant – who is looking to have a career season in 2022 after unleashing 670 yds and 4 touchdowns a season ago. It’s safe to say that Russell Wilson is a darkhorse MVP candidate with his toys in Denver.