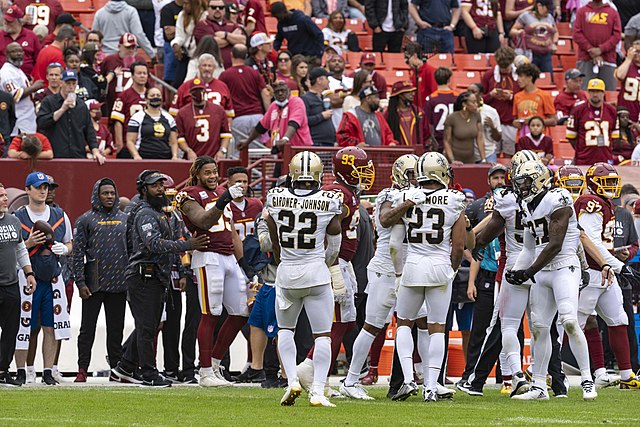 The sky is the limit for the Saints secondary

The New Orleans Saints simply have one of the most talented secondaries in the NFL. They arguably have a Top-5 cornerback in Marshon Lattimore — who made his third straight Pro Bowl last season. The former DROY and kryptonite to Mike Evans also signed a five-year contract extension worth $97.6 million dollars in September of 2021.

The Saints CB2, also known as Paulson Adebo, could be the x-factor on the Saints defense. The former Stanford CB ousted three interceptions and eight pass deflections last season. He really showed promise in the back-end of last season. He particularly stood out against the Bucs in their second match-up — as he allowed zero catches.

The Saints will also feature the rook Alontae Taylor in their secondary. Per Saints Wire, Dennis Allen has been impressed with the rookie thus far. Allen expressed that he’s further along than expected and that he’s excited about his ability in 2022.

P.J. Williams was an underrated re-signing by the Saints, to say the least. Williams absolutely had a personal-best season in 2022 — as he recorded three interceptions (including a pick-six), 2 sacks, and 42 combined tackles. He will look to be a ball-hawk and a big hitter in 2022.

The Saints display one of the top safety groups in the NFL with Tyrann Mathieu, Marcus Maye (who is somewhat in the shadow of Mathieu), and Chauncey Gardner-Johnson. Of course, the shiniest DB on the Saints is the Honey Badger. The former Chiefs DB has been named All-Pro in two of the past three seasons. Per New Orleans.Football, he was standing out in OTAs earlier this off-season.

The former Jets safety Marcus Maye was arguably the Jets best player in 2020 and then took a slight dip in performance last season. Maye has a similar skill-set as Mathieu and it’s clear that Allen will enjoy utilizing the two new safeties. Last but certainly not least, the Saints will have their chippy, ascending safety in Chauncey Gardner-Johnson (3 ints, 2 sacks, and 4 QB hits in 2021). CGJ might just be the key ingredient in finishing off Tom Brady and the Buccaneers in their next battle.