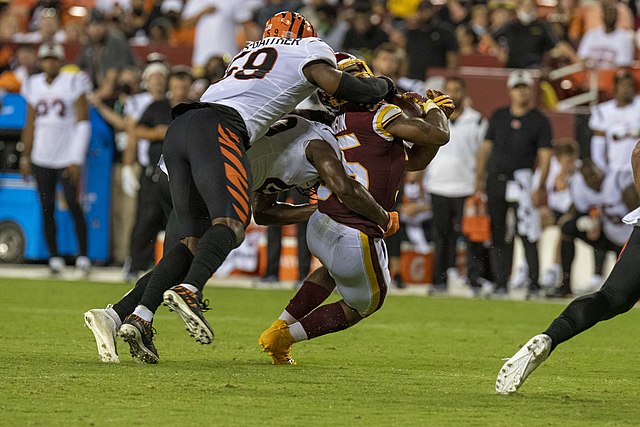 What is the Bengals linebacker outlook?

The Cincinnati Bengals absolutely have an underrated linebacker group heading into the 2022 season. They feature WLB Logan Wilson, MLB Germaine Pratt, and SLB Akeem Davis-Gaither. PFF ranked the Bengals LB group as the 13th best LB unit in the league (while PFF ranks the Bengals DL as the 14th best DL in the NFL).

Wilson, who recently got married, is really the anchor of the defense. The 26-year-old LB notched an impressive four interceptions (tied for first at his position) and 100 combined tackles last season. Wilson may be seeking a hefty extension after his third season in the league.

Pratt (2019 third-round pick) ousted 91 combined tackles, .5 sack, 5 TFLs, 2 forced fumbles, and an interception in 2021. Pratt is also entering the final year of his contract. The Bengals may find a new, more superb MLB in the 2023 off-season.

The 24-year-old Akeem Davis-Gaither only played in nine games last season — as he suffered an ACL injury in last October. Gaither had 28 combined tackles, 1 FF, and 3 pass deflections last season. He is under contract until the 2024 off-season. He has a ton of up-side, but he does have major issues with tackling. As Bengals Wire noted, he had the worst tackling rate among NFL LBs.

The Bengals should feel quite optimistic about their LB group, especially with the youth at the position. Perhaps a stout Bengals LB core can uplift the Bengals to obtaining an Super Bowl in the near future.