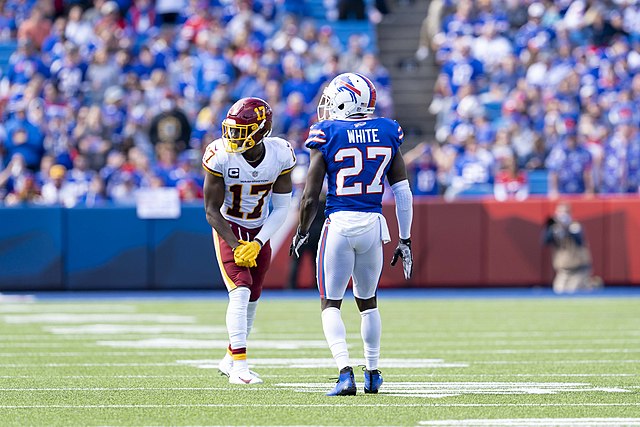 The Bills secondary will excel in 2022

The Buffalo Bills displayed a secondary that was scarier than “Men” in 2021 – as the Bills allowed the fewest passing yards, the fewest passing touchdowns, and they also had the fifth-most interceptions (19). The four horsemen (CB Kaiir Elam, CB Tre’Davious White, SS Jordan Poyer, and FS Micah Hyde) in the Bills secondary should help the Bills pass defense routinely dominate against opponents next season.

With that said, it needs to be noted that White, also known as a legendary hockey goalie in high school, is on the PUP list (which means he should return in Week 7). Per the team’s official website, Sean McDermott stated, “He’s working his tail off. Tre is a consummate pro, so that has not changed. We’re just excited to get him back when we can get him back.” White, who is getting his coaching stripes on (see above), had a modest 65.7 grade by PFF in his injury-riddled 2021 campaign. The 27-year-old CB will be a free agent in the 2026 off-season.

The Bills 2022 first-round pick Kaiir Elam has made plays while show-casing a fiery attitude. Per Bills Wire, Elam broke up two passes that were intended for Stefon Diggs on Day 5 of the mini-camp. Of course, the Bills rookie CB also got into a physical exchange with the star WR on Day 4 of the mini-camp.

The ball-hawk Jordan Poyer had a fine interception on Day 5 and he will look to be an All-Pro player for his second straight season (after having 5 ints, 3 sacks, 8 TFLs, and 9 pass deflections a season ago). PFF gave Poyer a 78.2 grade for his 2021 performance. Poyer is entering his contract year, but he wants a contract extension as soon as possible.

The former Green Bay Packer Micah Hyde also had five interceptions last season – which led him to garner second-team All-Pro honors. The American-Jamaican football player suffered a minor injury during Friday’s practice, but he should be is expected to be fine. Hyde is bound to be a free agent in 2024, so it’s clear that Brandon Beane will need to spend a lot of time brainstorming a long-term solution for the Bills safety group.

Ultimately, the Bills still have a Top-5 secondary in my opinion. PFF ranked the Bills secondary as the fifth-best secondary unit in the league this off-season. I feel like they stand right behind the Ravens, the Buccaneers, and the Dolphins entering 2022. I love the outlook for Elam right away and White should return to being a shut-down CB when healthy.