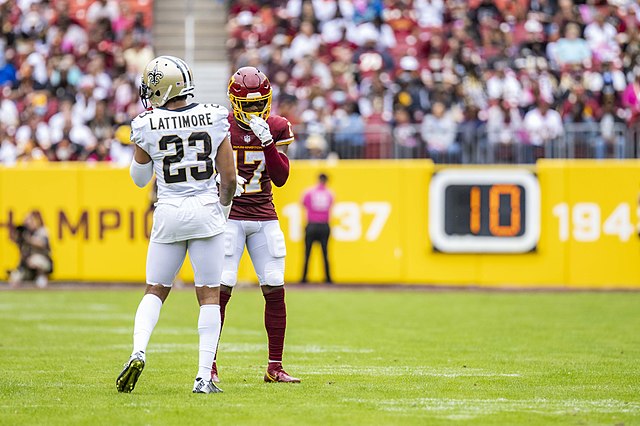 The New Orleans Saints have a very admirable cornerback group heading into the 2022 season. Their alpha cornerback Marshon Lattimore is gunning for his first All-Pro season. It should also be stated that the days of the New Orleans struggling to find talent at CB2 and CB3 have eroded – as the Saints exhibit the ascending Paulson Adebo and the 2021 surprise performer P.J. Williams. After the top three CB faces, the Saints will anticipate production from Alontae Taylor and Bradley Roby.

Lattimore had a personal best of 19 pass-breakups last season (which ranked third in the league), 3 ints, and a career-high 68 tackles (and this led him to make his fourth Pro Bowl trip). The Saints showed their commitment to Lattimore’s excellence by inking him to a five-year contract extension worth $97.6 million dollars. PFF gave Lattimore a 77.3 grade for his 2021 season.

The biggest story of the training camp is arguably the rise of the former Stanford CB. Nick Underhill of NOF stated on Twitter, “Paulson Adebo might be having the best camp of any player on the team.” Ross Jackson of Locked On also stated the following today, “Paulson Adebo is a beast in one on ones right now.” Finally, Luke Johnson of the New Orleans Advocate, expressed that Adebo shined today – as he referenced Day 5 of camp as “The Paulson Adebo Show” for his latest piece. The Saints signed the Honey Badger this off-season and it seemed like he would be hogging the spotlight at this point. It’s certainly an amazing surprise that Adebo is playing lights out alongside Lattimore and the gifted Tyrann Mathieu. If Adebo can consistently play like a Pro Bowl-caliber CB and Lattimore “stays healthy”, the Saints may just have a Top-5 CB duo in 2022.

Williams, aka Tom Brady’s worst nightmare, will look to build off his 2021 season (3 ints, 2 sacks, and 42 combined tackles). He garnered a modest 70 grade by PFF for his last season’s performance. He reunited with DA on a one-year deal worth $5 million dollars. The Saints 2022 second-round pick out of the University of Tennessee also hasn’t been a slouch. Brooke Kirchhofer, who is a reporter for WWLTV, noted that Adebo “stood out” on the first day of pads (today). Let’s not forget that the Saints still Roby, who also played at Ohio State, and he made flashes last season (such as his int against Josh Allen). The Saints also made an underrated move in extending Roby – so he will be a FA in 2024. All in all, it’s safe to say that the Saints may have numerous top-end CB profiles and that they will be loaded at the CB spot for quite some time.