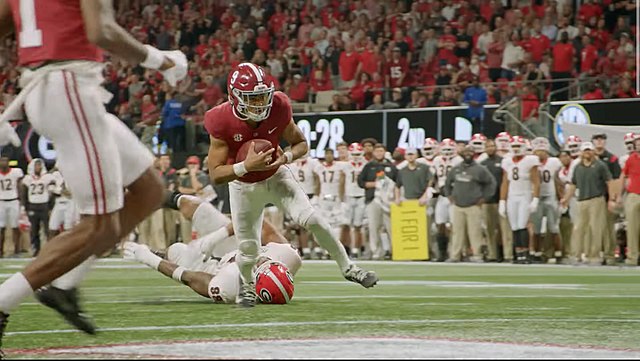 The University of Alabama, CC BY 3.0

Who is the best Heisman candidate?

Week Zero of the NCAA football season is now in the books with Week One action about to take center stage. Heisman Trophy candidates across the country will make their 2022 debuts throughout this week’s action. But just who will win the Heisman Trophy this season? Last season, the race seemed entirely up in the air with no consensus favorite showing up until relatively late in the season. Will this season be similar?

One thing is for certain: for the last several years, the Heisman Trophy has been utterly owned by quarterbacks. Of the last ten Heisman Trophy winners, eight of them have been quarterbacks, with just Derrick Henry (2015) and DeVonta Smith (2020) proving exceptions to this seemingly unwritten rule. Could it be any different this season? It’s hard to say considering the favorability quarterbacks have with the voting committee. These five players stand out as early Heisman favorites.

C.J. Stroud is expected to have a spectacular season leading the Ohio State Buckeyes. Ohio State is a perennial favorite to win the Big Ten and this surely the case again in 2022. After being dethroned by Michigan in 2021, the program is ready to put that behind them. Stroud struggled early on in ’21 but rebounded to have a great statistically season (4,435 yards, 44 touchdowns, 71.9 completion %) and finished fourth in Heisman voting. If he’s improved as a player at all since last season, his stats will warrant Heisman consideration.

The other piece of this is whether Ohio State wins the Big Ten. Fair or not, team success has a lot to do with Heisman voting. Is Michigan good again? Does Penn State rise up? Michigan State? Wisconsin? Stroud’s chances to win the Heisman Trophy lie squarely with Ohio State’s dominance over the rest of the conference. Assuming they win the conference and Stroud plays well all season, he’s probably the favorite.

Bryce Young figures to be in the mix again this season after throwing for 4,872 yards, 47 touchdowns, and seven interceptions in 2021. The dominance of Alabama in NCAA football over the last several seasons has been astounding. They’re simply an unrivaled program in this era. But can Young win the Heisman again? That could prove to be a long shot. In the history of the award, Archie Griffin is the only player to ever win it twice (1974, 1975). Matt Leinart couldn’t even do it during USC’s last golden age.

Can the Crimson Tide really do it again? Can they find themselves in the top three teams in the country yet again? One of these seasons, you’ve got to figure a crack finds its way into their armor. Georgia beat them last year, do they again in ’22? In all likelihood, the Tide do find their way to the College Football Playoff again, but Young certainly benefited from a wide-open Heisman field last season. It’s difficult to imagine him winning it again.

Caleb Williams is the one to keep an eye on. Just how much can we expect from the USC Trojans this season? They broke the NCAA map when they announced they’d be joining the Big Ten down the road, but for now they still play in the Pac-12, a conference that has gotten the short end of the stick more often than not in this supposedly fairer playoff era of college football. Can USC pull a stunner and make their way to the top of the ranks like in years gone by?

As just a freshman last season, Williams benched the overrated Spencer Rattler while at the University of Oklahoma. In 11 games for the Sooners, he threw 21 touchdowns and four interceptions. This isn’t setting the world on fire, but for a freshman, it’s very good. He has more potential than either Young or Stroud, but he also has the smallest margin for error of the three. If USC can’t make their way back to national prominence, his chances to win the Heisman are slim.

Bijan Robinson is the first non-quarterback to watch this season as he hopes to carry the Texas Longhorns back to the top much like Williams hopes to do for USC. The junior enters the ’22 season after rushing for 1,127 yards and 11 touchdowns last season in ten games. He had an additional four receiving touchdowns as well. His prowess in the run and passing game is a big reason why Texas has risen back into the national picture.

Robinson looks to play of a full slate of games this season and if he does so will be in a pretty decent place to make a case for Heisman consideration. In a Big 12 that also features Oklahoma and a seriously threatening Baylor team, Texas will have its share of competition to win the conference. But this is the first season in a while where you’ve been confidently able to say the Longhorns have as good a shot as the Sooners to win the conference outright.

Will Anderson is believed by many to be the best player in college football. This was believed last season as well when his Alabama teammate Bryce Young took the Heisman Trophy. After posting 17.5 sacks in 15 games last season, many have wondered just what a defensive player has to do to win the award. That’s a good question. If he puts up similar numbers this season and again doesn’t win, the questioning of the voting committee’s methods for decision making will be further vindicated.

Anderson was one of two defensive players at the Heisman ceremony last season, alongside Michigan’s Aidan Hutchinson. Perhaps that’s a small victory in itself considering what a rarity that is these days. All Anderson needs to do is to put up another extraordinary season like he did last year and let the voters take care of themselves. He’s probably closer than any defensive player has been in a while to winning the award.