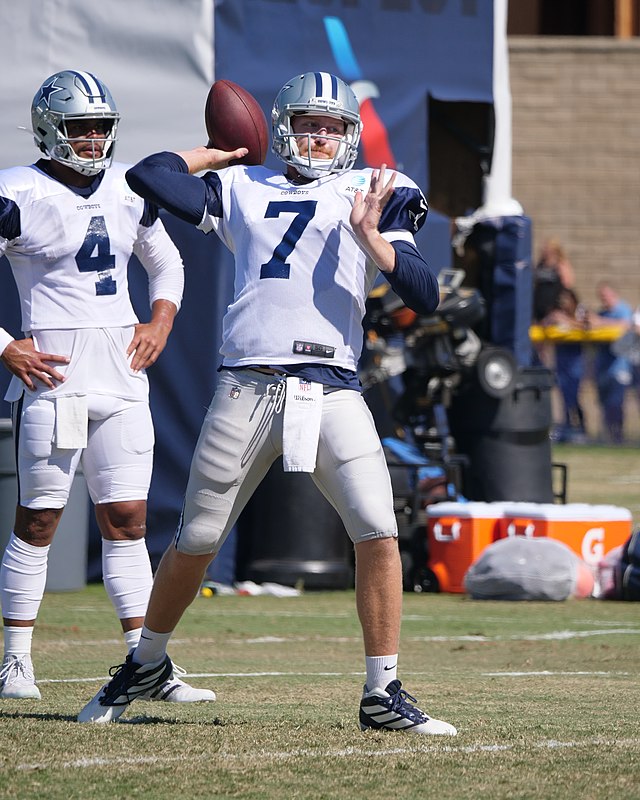 The Dallas Cowboys heroic backup quarterback Cooper Rush led his squad to an impressive victory over the New York Giants 23-16. Rush ousted a 67.7 completion percentage, 215 passing yards, 1 TD, and 1 INT in the MNF win. Of course, Rush is tasked with replacing the physically gifted, inspiring QB Dak Prescott, who hopes to be ready for Week 4 (home against the Washington Commanders). With that said, I will take a fun angle by untwining five interesting facts about the Cowboys QB2.

Similar to Tony Romo, Rush didn’t play at a large school, as he played a Central Michigan. It should be noted that it wasn’t far away from Rush’s hometown (Charlotte, MI). The Central Michigan Football website nicely notes that Rush sits in second in passing touchdowns and third in passing yards. His best passer rating (149.4) came in his sophomore season. Furthermore, he earned second-team All-Mac honors and academic All-MAC honors as a senior.

Rush isn’t a stranger to the Boys locker room, but he is a stranger as the QB1 for Dallas. Prior to his stints in 2022, he only started one game in place of Prescott (which was in 2021). He did manage to win his only game as a starter last season.

Greg Harvey nicely noted on Twitter that there are only two QBs in NFL history that have had a game-winning drive in each of their first three career starts. He concluded that Rush is one of those two QBs. Rush has that clutch ability and chip on his shoulder in all moments of the game (similar to the GOAT Tom Brady).

Cooper is married to Lauryn Rush. They began dating in 2017 — which was the same year that Cooper started his Cowboys tenure. Two years later, Cooper proposed to Lauryn. Shortly later, the duo had their wedding in Chi-town.

Rush has had a fabulous journey with America’s team over the past five seasons. Although, it’s unclear if he will remain in Dallas beyond 2022. He is set to be a FA in the upcoming off-season. I’m confident that many teams will be interested in his services after his talent that was displayed in 2022.