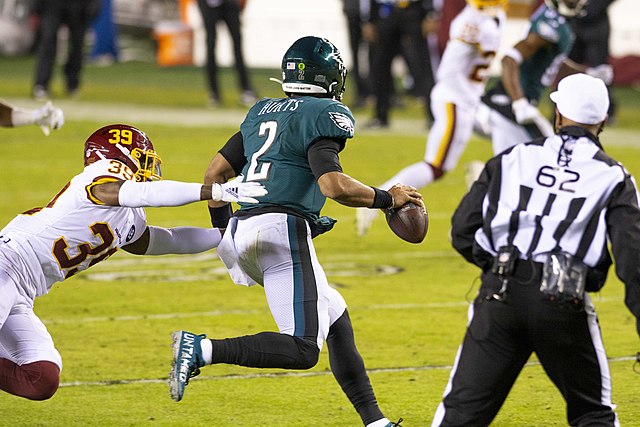 Jalen Hurts or Kyler Murray: which QB will win on Sunday?

The Philadelphia Eagles take a long plane ride to battle the Arizona Cardinals on Sunday at 4:25 PM. Each NFC squad is represented by a gifted, dual-threat QB. The Eagles QB Jalen Hurts is arguably having the sexiest three-game streak in his career. Meanwhile, the Cardinals QB that garners some unflavored memes is struggling to like his 2021 self without the very elite WR DeAndre Hopkins. With that said, I’m going to untwine the outlook for each young QB and project which QB has the edge ahead at this point.

It’s hard to deny the power of love Hurts after three games in the season. The former Bama stud is coming off his most impressive victory in 2022 with 340 passing yards, 3 passing touchdowns, and 0 interceptions against his nemesis, the Washington Commanders. In this season thus far, Hurts has registered 916 passing yards, 4 passing touchdowns, 167 rushing yds, and 3 rushing TDs. It’s also important to note that he’s only thrown one interception.

PFF has given Hurts a 79.4 grade for his 2022 performance at this point. He did have an 80.8 grade by PFF last season. I still believe that Hurts is cleaner with the football in 2022 last season and he’s bound to continue to improve his chemistry with the first-year Eagle A.J. Brown (155 yards this season) and second-year WR Devonta Smith (a whopping 169 yards and 1 TD last week).

Hurts was also phenomenal last week, despite the star TE Dallas Goedert leaving the game in the second quarter (who still made a return in the fourth quarter). The Eagles TE did still manage to have a receiving touchdown in Week 3.

The former Oklahoma Sooner hasn’t been an earth-shattering QB yet, but I still believe he has lots of magic in his 25-year-old self. Murray ousted 193 passing yards, 2 passing TDs, 0 ints, 29 rushing yds on five carries, and a 64.71 completion percentage in a Week 1 losing effort against the mighty Kansas City Chiefs. He was able to pick up his first victory of the season against the Las Vegas Raiders in Week 2 by unleashing 277 passing yds, 1 passing TD, 1 interception, and a 63.77 completion percentage.

Last week, Murray still didn’t make medicine sick. Against a crucial divisional foe, he accumulated zero touchdowns. To be fair, the Rams aren’t an easy defense to shine against. Although, he hasn’t found a way to really break through in any showdown without D-HOP at this early stage in the regular season.

Murray’s top weapon this season has undoubtedly been Hollywood Brown (24 catches, 251 yds, and 1 TD). I would really like to see Kliff Kingsbury find a way to get Zach Ertz (16 receptions, 134 yds, and 1 TD) more involved in the offense, particularly in the red zone.

The Eagles honestly have fierce pieces across the board on their defense (as they limited the Vikings to 7 points and the Commanders to 8 points) and I don’t love that Murray struggled to score a point against a stingy LAR defense last week. On the flip-side, I fully anticipate the insane Eagles WR duo to find gold against a Cardinals secondary that has bled against opposing WR2s and WR3s. Luckily, the Eagles have one of the NFL’s best WR2s in Smith.

The Eagles QB/magician blatantly has more accessible firepower and confidence entering Week 4. I wholeheartedly suspect that he will have more production and come out with the victory in Week 5.