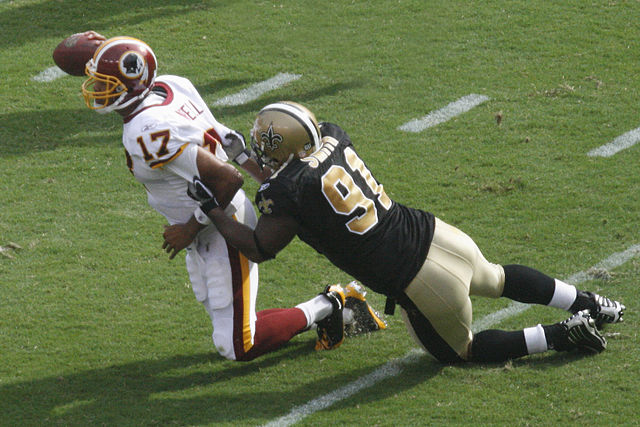 Who is the best pass rusher in Saints history?

The New Orleans Saints don’t have a long, rich history of prolific quarterback play, but they’ve certainly been blessed with countless Prometheus-like pass rushers. It’s blasphemous to ignore the magic from Cameron Jordan, but let’s not forget the old-school, scary QB hunters, as well. With that said, I’m going to untwine the 10 best pass rushers in Saints history.

Pat Swilling defied expectations as a third-round draft pick, to say the least. The most elusive member of the Dome Patrol notched 10.5 sacks in his sophomore season and then he really turned on the heat in his fourth season by unveiling 16.5 sacks, five forced fumbles, and one interception and garnering second-team All-Pro honors. Swilling proved to the NFL world that he was special in 1991 by winning Defensive Rookie of The Year (as he obtained 17 sacks, six forced fumbles, and one interception). He also claimed first-team All-Pro honors in 1992.

The modern-day John Wick-like pass-rusher for the Saints, Cameron Jordan, refuses to slow down at age 33. Jordan (112 career sacks) is closing in on Rickey Jackson’s Saints career sack record of 115 sacks. He’s certainly on track to make his sixth straight Pro Bowl, as well. Jordan’s motor and ability to stay on the field — he’s only missed two games in his career — place him one spot ahead of Rickey Jackson in my opinion.

It’s undisputed that Hall of Famer Rickey Jackson is a Top-3 Saints pass rusher of all time. Jackson didn’t earn a first-team All-Pro nod in his career, but he did unleash five second-team All-Pro seasons. In addition, Jackson (who was also a member of the Dome Patrol) had 10 seasons of 8+ sacks. He also had a whopping 40 career-forced fumbles — which is a bit more than Jordan’s career FFs (13).

The sadly deceased Saints icon Will Smith enjoyed a fruitful Saints career. Smith was a crucial member of the Saints Super Bowl-winning team in the 2009-2010 season – as he released 13.5 sacks in the regular season. The “Will Smith that didn’t star in Independence Day” finished with a potent 67.5 career sacks, 85 total tackles for loss, and 112 QB hits.

La’Roi Glover played the defensive tackle spot on another speed, to put it simply. Glover’s most spectacular season arrived in 2000 when he mustered out 17 sacks, 18 tackles for loss, and three forced fumbles — which earned him first-team AP honors & second in Defensive Player of The Year voting. Glover also garnered second-team AP honors w/ Who Dat Nation in 1998. He didn’t have an overly long journey with the Saints, however (as he played five seasons in the Black and Gold).

Wayne Martin was the “Marques Colston of defensive players”, to say the least. Martin had five seasons of 10+ sacks, yet he only made one Pro Bowl nod in his career. Martin finished his terrific Saints life with 82.5 sacks, 12 forced fumbles, yet he was let down by his support cast. It should also be stated that Martin wreaked havoc from the DE and DT spot (hello Aaron Donald).

Junior Galette is trying to grow as a human being and he did encourage me and my high school teammates on snapchat. Furthermore, he was an elite pass rusher in his Saints tenure. Galette rose from a scrappy undrafted edge rusher to a Pro Bowl snub — as he registered 12 sacks in 2013 & 10 sacks in 2014. The former Saints OLB wasn’t able to pull himself together after Sean Payton paid to cut him, however.

Renaldo Turnbull was ultimately a draft bust, but he did turn into the Incredible Hulk in 1993 by garnering first-team All-Pro honors (besides notching a modest nine sacks in his rookie season). Renaldo finished with 45.5 sacks — which weren’t exactly Saints ring of honor material.

Similar to Junior Galette, Charles Grant was able to knock out numerous double-digit sack seasons (10 sacks in 2003 & 10.5 sacks in 2004). Unfortunately, Grant wasn’t a beacon of excellence in his other seasons & he only finished w/ 47 sacks in his Saints journey.

PFF may just be Marcus Davenport’s best friend, despite his inability to stay on the field. Davenport garnered an 88 grade by PFF a season ago and an 84.1 grade by PFF in 2019. Davenport has consistently been pegged as one of the most effective DEs. Although, Davenport is also made of glass — as he missed five games in 2020 and six contests last season. Ironically, Davenport hasn’t missed a game this season, and he is sadly having a down season (.5 sack on the season).