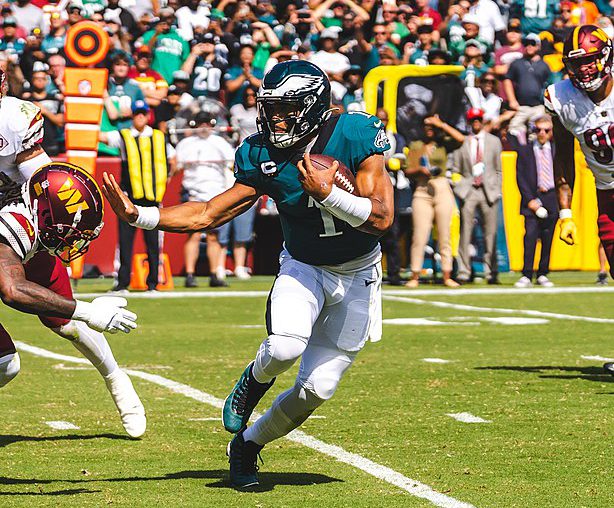 One could argue that the RPO (run-pass option) is one of the most successful play designs in the NFL today. The ability for the quarterback to either hand off to the running back or hold it and throw to his receivers really puts defenses in a bind. Let’s take a deep dive into where the RPO originated from and which quarterbacks are the best at it.

What is the RPO in Football?

The RPO was developed from the triple option which became so successful in college football. The premise is simple, the power is in the quarterbacks hands as he can hand the ball off, pass the ball or even keep it and run depending on how the defense is playing. When you look at this play design it seems simple on the surface but there is a lot going on that makes this play successful.

First, the quarterback needs to be comfortable at reading a defense. Before the ball is even snapped he needs to survey the defensive alignment and determine what type of defense they are playing. Is it a man-to-man or zone? The quarterback can get an indication of what type of alignment they are in by running some motion with their receivers and tight ends. If it’s determined that the defense is zone than an RPO play would be an ideal play call to run. Specifically a quick throw slant with the receivers attacking the zone and the quarterback getting the ball out fast.

Let’s now take a look at the running game benefits of the RPO. Once the ball is snapped the quarterback can read the linebackers and decide to hand it off or pass it. If the linebackers are fleeing backwards it opens up space for the zone run game. Jalen Hurts and the Eagles are arguably the best in the NFL today are running the RPO. With that said take a look at how the Commanders utilized this with their rookie Sam Howell.

As you can see in the highlighted play the Cowboys linebackers immediately retreat expecting pass and this opens up a huge hole for the running back. Like Hurts, Howell has the mobility to run which makes this an ideal offense to build around him. Even though it’s most deadly when the quarterback has mobility it can also be effective for those that lack the ability to run.

Riding the RPO to the Super Bowl

In 2017 the Philadelphia Eagles were riding high with Carson Wentz playing at an MVP level. It all changed when Wentz suffered a serious knee injury against the Rams and Nick Foles took over. Foles lead the Eagles to win the Super Bowl and he himself earned Super Bowl MVP. One of the reasons Foles was so successful was he utilized the RPO in an effective way.

When Foles took over for Carson Wentz then head coach Doug Pederson had to change the offense to accommodate his strengths. He knew that Foles lacked the mobility that Wentz had and needed to adjust. Pederson was one of the early adopters of the RPO and had a firm grasp on how to run it. The main points were to get the ball out of Foles hands quickly to neutralize the pass rush and attack the opposing secondary with the quick pass game. The results speak for themselves as Foles was incredibly accurate in this system and he now has a statue outside of Lincoln Financial Field in Philadelphia.

Future of the RPO and can it be stopped?

One can expect that the RPO offense will become more and more popular in the coming years. The NFL is a copy cat league and with the recent success of Jalen Hurts and the Eagles I expect more teams to follow that blueprint. As we pointed out with Nick Foles the quarterback doesn’t necessarily need to be mobile for it to work. Ideally a team would have a mobile quarterback that would give them another option for the QB to run. With that being said many defensive coordinators will be game planning to stop the RPO. How can they counter it?

One option to contain the RPO is utilizing the 3-safety defense In this system another safety is added to the defense while a defensive lineman is taken off the field. This type of scheme is best used in passing situations. Ideally the added safety provides better coverage ability but also the ability to attack in front of them on short passing situations. The defense will still have its challenges but this type of alignment gives them a better chance to be successful.

At the end of the day the RPO is here to stay and in today’s modern NFL it’s a must have in the offensive play book. The key will be how defenses adapt and try to contain it with different defensive packages. It will be a fascinating cat and mouse game for many years to come.