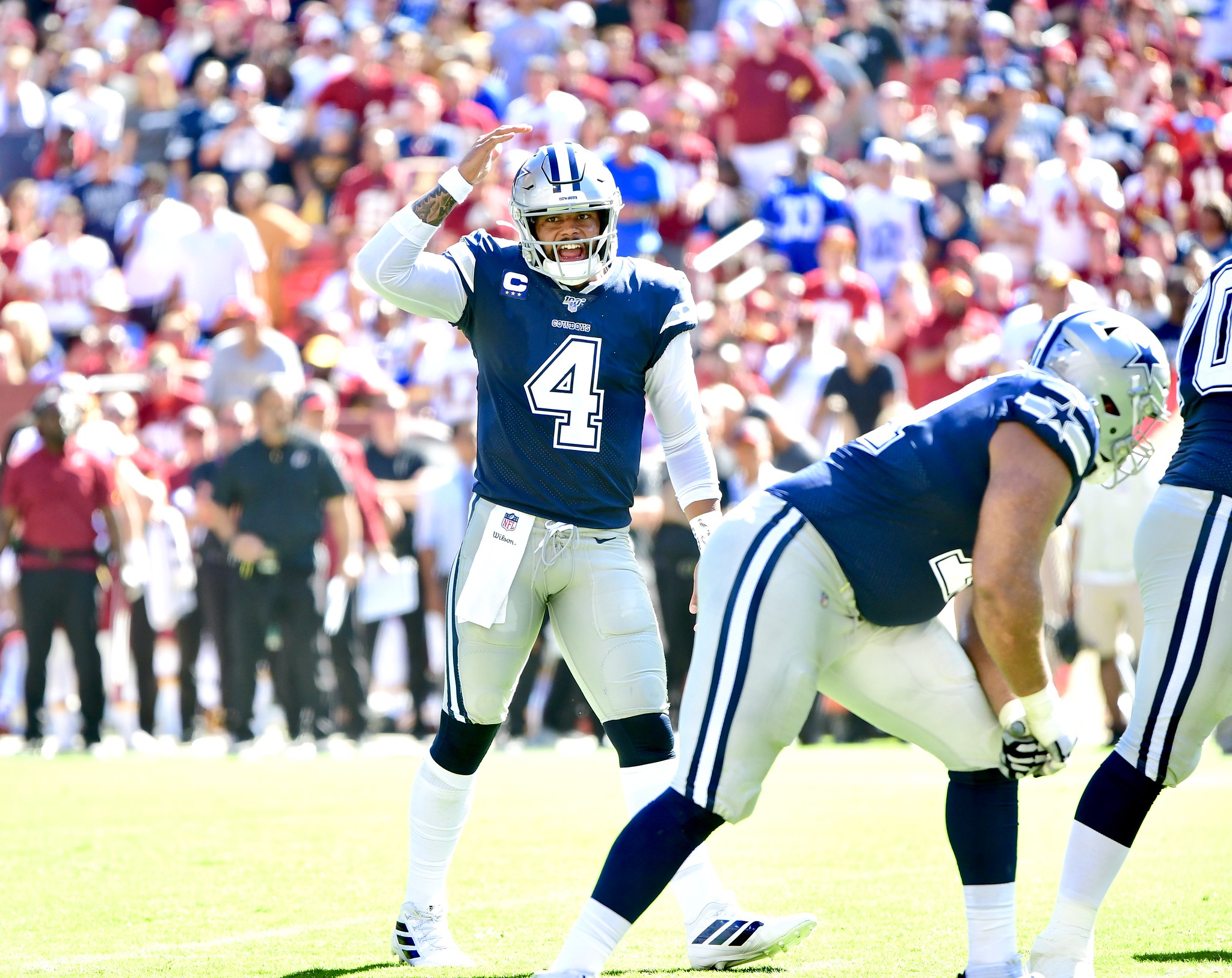 "Dak Prescott" by All-Pro Reels is licensed under CC BY-SA 2.0

What is the dynasty outlook of Dak Prescott?

Dak Prescott is going to be a popular name this offseason. After signing the franchise tag this past summer he suffered an unfortunate season-ending ankle injury in Week 5 and now finds himself without a contract.

Will Dallas resign Dak? Will they throw another franchise tag on him? Or is his time in Dallas over? And what does all of this mean for his fantasy value? Let’s take a look.

Prior to this season, Dak has never missed a start, playing all 16 games in the first four years of his career. In all four seasons, he was a Top 12 fantasy QB, even in his first season when he “stole” the job from Romo as a 4th round rookie.

Dak is currently tied for the seventh-highest passer rating in a career at 97.3. The player he’s tied with? Most people call him the greatest QB of all time, Tom Brady.

How many QBs can make this throw? A handful at most? Dak is a special QB that is consistently undervalued (because he was a fourth-round pick or because he’s on the Cowboys?) regardless of what he shows. Every single Cowboys loss gets blamed on him and that’s why there is such a negative persona surrounding Dak typically. Until this past offseason, he never got close to the respect he deserved, and then after his injury, he went right back to being disrespected by most.

Dak can attack you on any level, whether he’s throwing a short out or a streak he will get the ball where it needs to be.

2019, the season Dak got the respect he deserved. Kellen Moore was promoted from QB Coach to Offensive Coordinator. In his two seasons with Kellen Moore as offensive coordinator, Dak has shown that he is a top 5 QB, his mechanics continue to improve only making him a more accurate passer. The Cowboys ran more play-action in this season than they did in any of Dak’s previous seasons and it definitely made the game easier for Dak. Dak earned the 2nd most wins above replacement of any QB in the 2019 season.

It’s not talked about enough but Dak also contributes to a very safe rushing floor, at least 270 rushing yards in each of his first 4 seasons with a total of 21 rushing touchdowns.

After coming off his best season in the league the Dallas Cowboys used their first round pick to select the best WR in the NFL Draft (sorry JJ fans), CeeDee Lamb. The Cowboys also moved on from Jason Garrett who didn’t do Dak any favors and brought in Mike McCarthy.

Before getting injured Dak was on pace to easily finish as the fantasy QB1 this season while projecting to throw for over 5500 yards and nearly 40 total touchdowns. While it is a small sample size this year I think there’s a high chance he would have finished with those similar numbers. Having Lamb, Amari, Gallup, and Zeke at his disposal is just unfair, any decent QB could put up good fantasy numbers but Dak has shown elite traits in the pocket.

We saw how bad the Cowboys collapsed when Dak went out. Yes I know they were only 2-3 on the season in his 5 starts but when he went out the whole offense basically shut down. Over the first 5 weeks of the season when Dak was healthy Zeke had 4 games with over 20 fantasy points, he didn’t have one of those the rest of the season without him. The main difference was Zeke was seeing the same passing volume he did with Dak (30 targets first 4 games, 41 targets last 11 games). The same goes for many of the offensive weapons on the team.

Dak makes everyone around him better

As you can tell Dak was going off the first 5 games of the season, he played less than 70% of the snaps the week he got hurt but still averaged over 370 passing yards during the span. But that doesn’t show you how much better he makes other players look. During Dak’s 5 games CeeDee Lamb scored 39.7% of his season total fantasy points, Amari scored 37.7%, and Zeke scored a whopping 49.5% of his season total during those first 5 games(31.25% would be average). Kinda went off track here since this is more of a reason to buy other Cowboys(you should) but Dak is the one that makes it all happen.

Don’t worry the Cowboys are going to do what needs to be done to keep Dak in Dallas. I expect them to come to a long term extension with Dak so they don’t have to worry about any of this again. The Cowboys would have been in the playoffs if Dak didn’t go down and they should be in the position to make playoffs again next season. Jerry Jones recently said he knows Dak has all the leverage and I’m here for it, give Dak exactly what he wants.

Dak’s injury doesn’t worry me at all for his future. This is the first time he ever missed time due to injury throughout his entire football career(other than a sprained elbow in college). It was a devastating injury but it won’t derail his career, he will be back and I expect him to pick up right where he left off.

With that being said Dak is a buy/hold right now for me. Hopefully, you were able to trade for him during the season when you could really take advantage of the injury discount but I would still reach out to the Dak owner in all of your leagues and try to get a feel on how they view him.

If they don’t view him as a top 3-5 QB (before 2021 rookies come in) see if you can trade an older/worse QB (like Goff, Stafford, Ryan) and a future 1 with some sweeteners on top for him. Of course, some Dak owners will value him properly, in that case, he’s probably not worth buying unless you have enough extra bench assets that it won’t ruin your starting lineup.

Dak is my QB2 only behind Mahomes, Josh Allen and Kyler Murray are for sure right on his ass but for now if/when Dak stays in Dallas he will finish as a Top 3 QB for multiple seasons with the potential at QB1 overall multiple times. If he plays 16 games for Dallas in 2021 he will be the QB1.