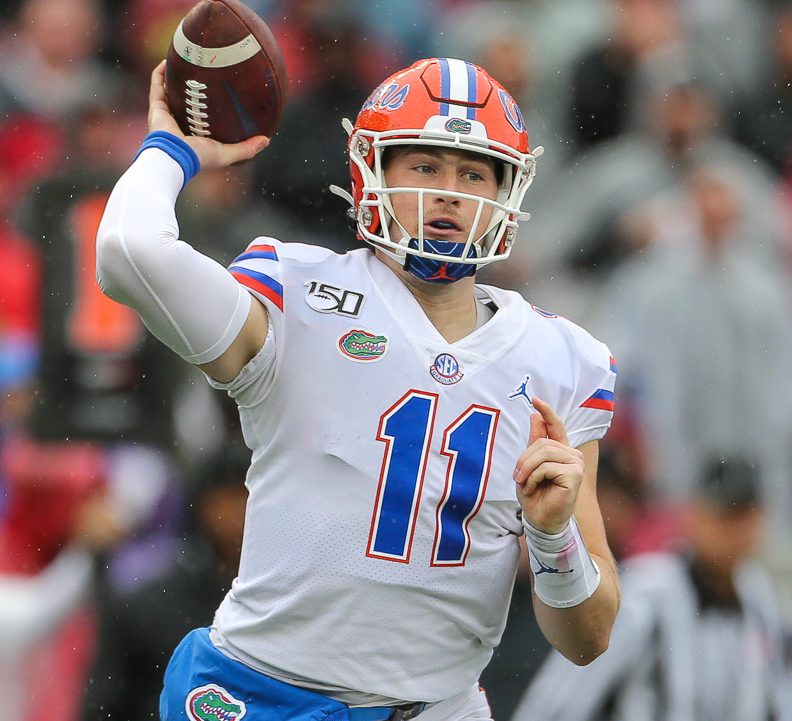 Kyle Trask was the starting quarterback for the University of Florida this past season, where he compiled some ludicrous stats. The stat line for the year consisted of 43 touchdowns, eight interceptions, and 4,283 passing yards. Trask’s 43 touchdowns were number one in the NCAA this year.

Since Trask put up these kinds of numbers what aren’t we talking about him being the number one or two draft pick for the year? Trask was one of four finalists for the Heisman Trophy this year, so why aren’t we hearing more about him?

With the numbers, he compiled this year in the NCAA some NFL front office will likely take a chance on Kyle. That said, from what I see on film, Trask is a bit of a project.

You can find what some analysts think about Trask by searching all over the web, but to give you some background here, Mel Kipper and CBS Sports have Trask rated as the sixth-best quarterback in this class. That puts Trask most likely in the second round of the NFL draft.

It also most likely puts him on an NFL team as a backup quarterback and not a starter. To be completely upfront, I think that’s where Kyle needs to be. You will see some of the NFL scouts out there talk about how Trask plays football from the neck up and his physical attributes are secondary.

Typically, I welcome that from an NFL quarterback. Michael Vick once admitted that he tried to count on his athletic ability instead of studying enough film and being a true NFL quarterback. This doesn’t appear to be a challenge for Trask.

So, let’s talk about what we like about Trask. He has incredible pocket awareness. He doesn’t possess the athletic ability to run and create things as you see from Joe Burrow, Justin Herbert, or Baker Mayfield, but you would swear Trask has eyes in the back of his head. He has enough mobility to buy time and he’s not afraid to sling it.

The qualities above I think most of us want in a quarterback. That said, Trask also has a bad habit of throwing off his back foot and throwing it into double or triple coverage. Florida tight end Kyle Pitts bailed out Trask on numerous occasions this year, take note of the University of Georgia game earlier this year.

To me, the biggest challenge for Trask in the NFL is arm strength matters. Chad Pennington made himself a decent career with the New York Jets, with a below-average arm, regarding NFL standards. Pennington is more an exception to the rule than an example.

If you watch the ball flight of a Trask throw and compare it to any of the first-round quarterbacks these past two years you see a noticeable difference. There is a lot more arc on the ball flight with a Trask throw and he does not have anything close to the fastball we see from Justin Herbert, as an example. It’s also not a very pretty spiral either like we see from Herbert, Daniel Jones, or Joe Burrow.

I am sure you asking, what does any of this have to do with where he fits best? Because at this point, I don’t seem like I am much of a fan. I will be upfront, I am not. I am not a quarterback guru, but what I see is sloppy mechanics, poor footwork, and a propensity to force throws to his playmakers. You see this even on his highlight reels.

All of that said, there are things to like. Things that frankly are not coachable. Kyle does have an incredible pocket presence and he has a knack for making the right throws when it’s needed.

Few NFL teams could use a player like Trask. While I question if he will ever be a starting NFL quarterback, I have no doubt he would be a sufficient backup. An ideal place for Trask to land would be on a team with an established quarterback, where he can learn.

Kyle is a very smart player. You don’t average a 68.9% completion rate and throw for over 4,200 yards if you aren’t a smart quarterback and don’t understand the game. Kyle will make you pay if you give him the opportunity. Some of Kyle’s mechanics, especially the footwork can be worked on and improved. Which should also help the velocity of the ball on Trask’s throws.

Coaches like Brian Daboll and Arthur Smith, with the Buffalo Bills and Tennessee Titans respectively, have made huge strides with raw talent. The challenge, both Smith and Daboll look to be in line for new Head Coaching opportunities and we currently don’t know where they will land. Another coach with success at help quarterbacks is none other than Sean McVay of the Los Angeles Rams.

Kirk Cousins has attributed McVay with saving his career. I know many aren’t impressed with Kirk, but he is a starting NFL quarterback that was drafted in round four of the NFL draft. Kirk isn’t the most mobile, and he doesn’t have a cannon for an arm, but he typically plays smart.

If Trask is going to have success in the NFL, I believe he needs to take a path similar to Kirk Cousins. Learn while being a backup, work on all the mechanics, and get linked up with a coach that can mold him.

If Sean McVay saved Kirk’s career I believe he can have similar success with Kyle Trask. The Rams currently have Jared Goff under contract through 2024 but there is an opt-out option after the 2022 season. If I was Kyle this is where I would want land.

Kyle would get an opportunity to back up Jared Goff. Currently, on the Rams roster, there is nothing behind Goff to get excited about. When Jared got hurt and was scheduled to miss a game, no one gave the Rams a chance. They need to be quarterback hunting.

The Los Angeles Rams have pick fifty-five in the second round of the NFL draft. While I think it’s too early to gamble on Trask at that spot, but he could be a heck of a value with one of the Rams’ next two picks.

The Rams are projected to have two picks in both the third and fourth rounds. The extra picks are projected compensatory picks for both Dante Fowler and Corey Littleton.

Another solid landing spot for Kyle Trask would be with the Indianapolis Colts. Frank Reich got his opportunity in part for the work he did with Carson Wentz. Since Reich went to Indy, Wentz has gone from a QBR (ESPN’s Total Quarterback Rating) of 78.5 in 2017, to 49.7 this year. Wentz was an NFL All-Pro in 2017 to being benched for a rookie this year.

Carson Wentz and the Philidelphia Eagles have their own issues, but the point is Frank Reich has created a reputation of working with quarterbacks. Granted, he was one as a player. Does anyone remember the 1993 AFC Wild Card Game between the Houston Oilers and the Buffalo Bills? If not, check it out.

Currently, Reich is counting on Phillip Rivers at quarterback while mixing in Jacoby Brisset. Last year Reich and Brisset went 7-9 with the Colts finishing third in the division.

Brisset threw for 2,942 yards in fifteen games in 2019. Brisset is not the solution at quarterback, and frankly, I think Reich got more out of Brisset than I thought was possible.

Due to making the playoffs, the Colts aren’t going to have the option of drafting one of the top 3 projected quarterbacks in this April’s NFL Draft, at least without a massive trade. Phillip Rivers only signed a one year deal but has said he wants to play another year.

Either they bring Rivers back for one more year, or they go quarterback shopping on the free-agent market. Either way, my best guess is they will have a veteran under center for the 2021 season. As I mentioned, Trask will have the best chance of success if he gets to sit and watch behind a capable and smart starter.

For the third and final spot, and I have a disclaimer here, I think it’s the Atlanta Falcons. This would be only if Matt Ryan is still there, as Arthur Blank stated this week, that Ryan and Julio Jones may not be back next year.

There is no reason for the Falcons to move on from Matt Ryan, based on his contract. There is too much dead cap space, so I don’t think they will have much luck trading Ryan. Matt Ryan is a perfect player for Kyle Trask to learn from.

Ryan has a strong pocket presence, he doesn’t typically make bad decisions or force throws, and he’s not known for having a cannon for an arm. We don’t know who the Atlanta Falcons will hire as a new head coach, but it would be wise to hire a staff that can support developing a young quarterback. With Ryan and a talented coach, Trask could potentially develop into something. Maybe even a starting NFL quarterback.